Why Narendra Modi is the best bet for brand BJP

If the BJP has to pose any sort of challenge to the Congress-led United Progressive Alliance in the next Lok Sabha elections, it needs to go back to what it has always stood for in the mind of the voter, says Shonalee Biswas

Every political party is akin to a brand.

A brand that stands for something that the customers of the brand, ie, the voters may or may not believe in.

If they believe in what the brand stands for, they will buy the brand, ie, vote for it, support it etc.

If they do not believe in what the brand stands for, they will stay away from the brand and buy some other brand (ie, political party) that stands for what they believe in.

As the slogan makes it very clear, the brand DS4 came with a decidedly anti upper-caste tinge attached to it.

Kanshi Ram later launched the BSP, with a rather similar sounding but more subtle slogan, 'Tilak Tarazu aur Talwaar, inko maaro joote chaar' (with Tilak, Tarazu and Talwar being the representation of the Brahman, Bania and Thakur castes, as was the case with DS4). The positioning of the brand was entirely anti-upper caste like that of DS4.

Or take the case of the Left Front in West Bengal. What did that brand stand for? To start with, when the Left Front first came to power the Left brand stood for "land reforms" where share croppers where handed over land after taking it over from wealthy landlords.

The Left Front also stood for the teak tree that card-carrying members of the party planted in front of a house where a girl child was born. So that when the girl was old enough to be married, the teak tree could be cut and sold and the wedding expenses could be met from the money that was raised.

In the late 'seventies and early 'eighties the Left brand also stood for "trade unions" which bargained hard in the interest of the workers. This, over the years, ensured that most industrialists shut shop and left for other parts of the country.

The Left brand stood for everything that the common man in West Bengal could relate to. It was pro-poor and anti big-business.

The brand of Bharatiya Janata Party was built on the war cry of 'Saugandh Ram ki khaate hain mandir wohin banayenge'. This ensured that the party was able to increase the number of seats in the Lok Sabha from two in 1984 to 88 in 1989 and 118 in 1991.

The BJP has always been a political front for the Rashtriya Swayamsevak Sangh, though both BJP and RSS would like us to believe otherwise. But until the party directly associated with the cause its intellectual mentor stood for, it really did not go anywhere. Even in its earlier avatar as the Jan Sangh (before 1979) it barely had any presence in the Lok Sabha.

The pro-Hindu causes of making temples, banning cow slaughter, having a uniform civil code etc that the BJP espoused, struck a chord with the voter and was termed as 'Hindutva'. It worked like a dream for the party.

From being a small political front for the RSS, the BJP catapulted into being one of India's largest political parties with significant presence across various parts of the country.

Of course, political brands like other brands tend to not believe in the old adage of "when it ain't broke why fix it" and keep looking for something new all the time, which more than often leads to significant problems.

In the case of the BJP this happened around the 2004 Lok Sabha elections. The party decided to abandon its Hindutva branding and go in for what it thought was a more mass market campaign of "India shining".

All it did was surprised people out of their wits when they suddenly got a call from an unknown number on their mobiles, and the voice said 'Mein Atal Bihari Vajpayee bol raha hoon'.

The party lost the elections and has been in opposition ever since.

The first impressions that big "political brands" form in the minds of voters are very difficult to get rid of. This has been proven time and again.

Take the case of the Left Front in West Bengal. Since the turn of the century this agglomeration of communist parties started to preach the good points of capitalism. While the idea was good from the point of view of creating jobs, it clearly did not find much support in the mind of the voter.

The front, under the leadership of then chief minister Buddhadeb Bhattacharya, abandoned the tried and tested principles of Karl Marx in favour of the "invisible hand" and Adam Smith.

The Left Front probably thought if China can do it, why can't we? The voters clearly did not like this new story being projected by the Left, and threw it out after 34 years in power.

Another interesting case is that of the Janata Dal, a party formed by the merger of various factions of the erstwhile Janata Party, the Lok Dal, Congress-S, and the Jan Morcha led by V P Singh.

The party's calling card was 27.5 pc reservation for other backward classes in government jobs, as proposed by the Mandal Commission. That is what the party became associated with in the minds of the voter.

Of course, the trouble was this was a really short term goal. Once the Mandal Commission recommendations were implemented, there was nothing else that the party stood for. The Janata Dal brand suddenly did not stand for anything.

This soon led to the party like the Janata Party before it splitting into various smaller parties like the Samajwadi Party, the Rashtriya Janata Dal and the Samata Party.

The end of Janata Dal led to one of the most memorable though underrated slogans in the history of Indian politics: 'Thakur buddhi, Yadav bal, jhandu ho gaya Janata Dal'.

Getting rid of first impressions that are formed in the mind of the voter is very difficult unless of course you are the Indian National Congress, which has been around for so long that it doesn't really stand for anything and thus can keep changing forms like a chameleon.

So if the BJP has to pose any sort of challenge to the Congress-led United Progressive Alliance in the next Lok Sabha elections, it needs to go back to what it has always stood for in the mind of the voter: Hindutva.

What remains to be decided is the degree. Whether it wants to follow the hard line like it did during the 1989 and 1991 elections, when slogans like 'Yeh to kewal jhanki hai, Kashi-Mathura baaki hai' were common place, or the soft Hindutva that it came to be associated with when Vajpayee was at the helm of things.

And to go back to this line, they need a leader who can project the attributes of the pro-Hindutva line. And they really don't have any one better than Narendra Modi to do that.

Of course, to a lot of people Modi comes across as a hardliner, but some amount of spin-doctoring of his image by the backroom boys of the BJP can really work wonders for him and the party. The next Lok Sabha elections happen only in 2014, so there is a lot of time to do that. Indeed, this has already started with the recently concluded Sadhbhavna Mission. 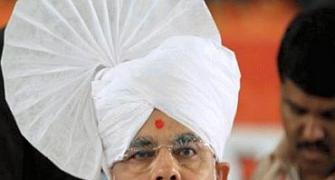 3 factors that stand between Narendra Modi and PM post 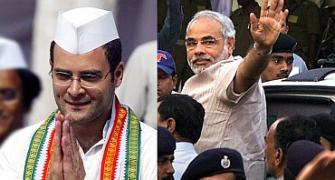 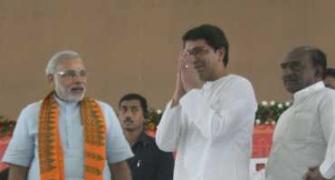 Fast over, but WILL continue my mission: Narendra Modi 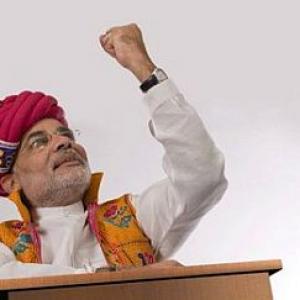