News
Business
Movies
Sports
Cricket
Get Ahead
Money Tips
Shopping
Sign in  |  Create a Rediffmail account
Rediff.com  » News » Why Mohan Bhagwat is right about the army

The RSS chief's comment that if war broke out, the military would not be ready for at least six to seven months is correct as it faces a shortfall in training and alertness and an even greater lack of funds for defence preparedness, notes Ajai Shukla. 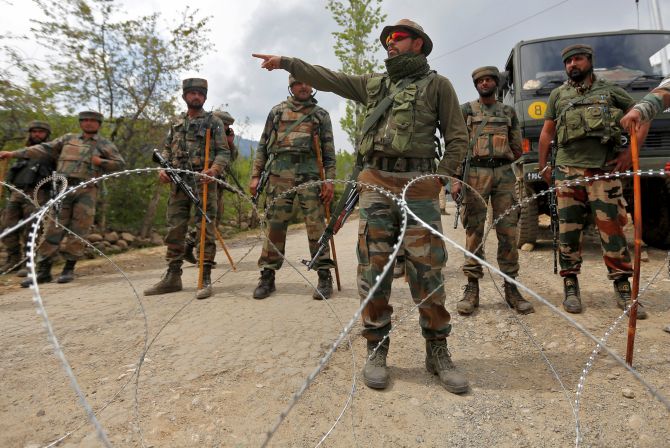 Mohan Bhagwat, the chief of the Rashtriya Swayamsevak Sangh, was on the button when he declared that, if war broke out, the military would not be ready for at least six to seven months.

The RSS chief did not mention that those months would fly past in emergency procurement of weaponry for the army, probably at usurious prices. And he was laughably naive in boasting that the RSS could fill the gap while the army prepared for operations.

Yet, Bhagwat perceived the worrying lack of defence readiness, even though it apparently escapes those whose primary responsibility is the defence of the country -- Prime Minister Narendra D Modi, his defence minister Nirmala Sitharaman, and her predecessors, Arun Jaitley and Manohar Parrikar. The situation was no different under the previous government.

That the military is unprepared for war is no secret.

Beyond the political bluster, threats from generals and warmongering from television warriors, this is evident from plenty of thoughtful commentary, and from a conveniently leaked letter written in 2012 by then army chief, General V K Singh, to his defence minister, A K Antony, listing equipment shortfalls.

There is also a less advertised shortfall in training and alertness that has gifted adversaries with operational successes like in the terrorist strikes in Pathankot and Uri, and in Jammu over the weekend.

What are the messages from the defence budget?

Seen alongside the last few Budgets, it highlights an unimaginative incrementalism, with each year seeing broadly the same percentage of funds distributed between services and departments, with the absolute allocation gradually rising in tandem with the 6 to 10 per cent annual rise in the overall budget.

In each of the last three years, the army has been allocated 68 to 69 per cent of the services' budget, with the navy getting about 12.5 per cent and the air force 19.5 per cent.

But the grant of One Rank One Pension in 2015 and the implementation from 2016 of the Seventh Pay Commission's salary recommendations disproportionally raised the manpower-heavy army's requirement for money, at the cost of the navy and air force.

The noteworthy point here is that even this unusual shift in allocations was occasioned not by strategic imperatives, but by a perceived political need to raise military pensions and salaries.

Also evident is the government's unwillingness to tackle the personnel problem head-on, even though manpower costs are now close to 70 per cent of the military's total allocation.

This reluctance is evident from the exclusion of military pension costs from the declared budget, even though the pension bill is a direct outcome of personnel policies followed by the three services.

Excluding pension costs from the defence budget, even though they have almost doubled under the present government from Rs 605 billion in 2014-2015 to Rs 1,089 billion this year, creates little incentive for the painful shift to a predominantly short-service military where most soldiers serve for five to seven years and then move on without being entitled to a lifetime pension.

This government has added simplicity and transparency to the defence budget and factoring pension costs would be another practical and beneficial reform.

In countries that are serious about defence, each service is allocated funds based on perceived security priorities, operational roles in dealing with those threats, and the equipment, training, and manpower needed to discharge roles.

However, the unchanging percentages in the service allocations bear no reflections of the security debates and environment changes of recent decades.

There is no funding for the changed approach to warfighting in a nuclearised backdrop that has birthed the Cold Start doctrine -- lightning strikes by forward deployed armoured formations to respond to serious provocation by Pakistan.

Nor is there any budgetary recognition of the pressing need for additional Special Forces, or aerial strike capabilities as viable retaliatory options -- think surgical strikes.

The repeated public affirmations about India taking on the role of 'net security provider' in the Indian Ocean, or building up coastal security mechanisms along a highly vulnerable 7,500 kilometre coastline, is not validated by any increased outlay in the navy budget, which has in fact shrunk by two per cent in overall terms; and from over 30 per cent of the defence capital budget in 2014-2015 to just 25 per cent today.

Similarly, an already depleted air force, which must urgently conclude a 'single engine fighter' contract to replace 10 retiring MiG squadrons with fighters that are built in India, has been allocated a capital budget that would barely cover 'committed liabilities', the phrase for instalments on purchases in earlier years, like the Rafale fighter.

Another major dichotomy is the pittance allocated for 'Make' projects, which senior defence ministry officials talk up as locomotives for India's defence industry.

'Make' projects involve consortia of Indian defence firms coming together to build complex defence platforms with the defence ministry reimbursing 80 to 90 per cent of the development cost.

Yet, despite its obvious industrial and technological benefits, the government spent nothing under this head in 2015-2016; Rs 2.5 billion in 2016-2017; Rs 0.2 billion last year; and has allocated Rs 1.4 billion this year, a mere drop from the capital budget ocean of Rs 940 billion.

The government must ensure that defence spending -- which will account for 16.5 per cent of government spending and 2.16 per cent of the gross national product in 2018-2019, inclusive of pensions -- buys bang for this very considerable buck.

This will require thoughtless incrementalism to give way to holistic planning and a steady hand at the tiller.

With three changes of defence minister in four years, the Modi-government's entire term will have passed in ministerial learning.

The defence ministry cannot afford this game of Musical Ministers.