News
Business
Movies
Sports
Cricket
Get Ahead
Money Tips
Shopping
Sign in  |  Create a Rediffmail account
Rediff.com  » News » Why it may still be advantage Congress-UPA

Why it may still be advantage Congress-UPA

At some point the utter lack of governance is going to cost the Congress-UPA dearly. Meanwhile the BJP has largely failed to take advantage of the disarray in the Congress, says Rohit Pradhan.

As widely expected, Pranab Mukherjee has been elected India's next President ending a quixotic bid by the former speaker of Lok Sabha, PA Sangma. Vice President Hamid Ansari remains an overwhelming favourite to retain his position; Jaswant Singh is little more than a sacrificial lamb.

It appears that the Congress party -- despite some initial hiccups -- has scored comprehensive political victories. Nevertheless, the presidential elections hold many lessons for India's polity as well its two principal protagonists: Congress and the Opposition Bharatiya Janata Party.

First, there has been much speculation about resurrecting the so-called Third Front: An alliance of regional parties ideologically led by the Left. The logic is clear enough. With the Congress buffeted by a faltering economy, poor governance, and large corruption scandals, the party would be hard-pressed to cross 150 seats in the 2014 general election.

On the other hand, marred by internecine warfare, ideological confusion, and leadership issues, the BJP has largely failed to take advantage of the disarray in the Congress ranks. Therefore, the situation appears ripe for a reprisal of the 1990s with a Third Front government propped up by one of the two national parties.

Indeed, when Mulayam Singh Yadav formed an alliance with the temperamental Mamata Bannerjee, it appeared to signal a significant shift in the national polity. However, as is his wont, Yadav soon extracted his price and made his peace with the Congress party leaving Banerjee humiliated and isolated.

Ultimately even Banerjee was left with no choice but to vote for Pranab Mukherjee. It appears that despite the weaknesses of the two national parties, the idea of a Third Front remains inchoate.

There are simply too many egos and ambitions involved, and in any case, Third Front governments have been extremely unstable in the past. Unless guaranteed the top post, there is little upside for a Mulayam Singh or Jayalalithaa in joining a Third Front coalition when there are ample opportunities for rent extraction with more stable governments.

Even the Left parties, which have vigorously championed the idea of a Third Front in the past, appear chastened by their massive defeat in the last general election. Despite its easy victory, the presidential elections underline the continuing political challenges for the Congress party.

It is hobbled by its poor governance and though its government may well survive, the political cost will only increase if the UPA government continues to be on auto-pilot.

Take Bihar's chief minister Nitish Kumar, for instance. The UPA government has gone to extraordinary length to woo the powerful regional leader; it recently sanctioned two central universities for Bihar. It is sympathetic to Bihar's economic demands though it still has not granted it the coveted special status.

Perhaps most tellingly, the Congress party has completely marginalised Laloo Yadav -- easily its most consistent supporter -- and with Nitish Kumar's public discomfiture with Narendra Modi, he represents an attractive target. When the Janata Dal-U decided to support Pranab Mukherjee, it appeared that the Congress's overtures had paid off. Yet, contrary to most expectations, Nitish Kumar offered his party's support to BJP's Jaswant Singh for the vice-presidential elections.

Nitish Kumar is hedging his bets -- by appearing equidistant from both the BJP as well as the Congress, he is keeping his options open for a post-election tie-up. Nevertheless, the Congress's failure to woo Nitish Kumar indicates that the poor reputation of its government is extracting substantial political costs. If the UPA was a shoo-in for 2014, Nitish Kumar would have likely ditched the NDA by now.

For the BJP, the presidential elections have been an unmitigated disaster. Two of its allies -- the JD-U and Shiv Sena -- opposed the party's decision to support Sangma while Karnataka continues to be a mess with large-scale cross-voting in favour of Pranab Mukherjee.

Perhaps nothing illustrates the challenges the BJP faces in creating a credible alliance against the UPA government than the case of YS Jaganmohan Reddy. After the death of his charismatic father, Jaganmohan had a public fallout with the Congress and was virtually forced out of the party.

Jaganmohan subsequently launched his own party and has made major inroads in Andhra Pradesh politics -- an electorally crucial state for the Congress party. Often the fight between Jaganmohan and the Congress appears more personal than political with constant sniping and targeting of family members.

The Congress government has even unleashed the CBI on Jaganmohan and has put him behind bars. Yet, despite all the public bitterness, Jaganmohan decided to support both Mukherjee as well as Hamid Ansari!

If the BJP is to emerge victorious in 2014, it urgently needs allies like Jaganmohan --however, powerful regional satraps like Jaganmohan and Jayalalithaa still won't openly ally with the party.

The BJP faces a virtually impossible conundrum: To attract allies, it needs to emerge as a serious contender for power at the national level; however, for that, it needs allies.

Perhaps the most interesting aspect of India's current polity is that it is easy enough to make the case against all the principal political formulations; it is virtually impossible, however, to make a case for them.

It may still be advantage Congress-UPA after the presidential elections but at some point the utter lack of governance and the appearance of drift is going to cost it dearly. It is another matter if the Opposition would be able to take advantage of its travails.

Rohit Pradhan is a fellow at the Takshashila Institution. The views are personal. 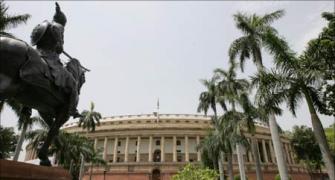