News
Business
Movies
Sports
Cricket
Get Ahead
Money Tips
Shopping
Sign in  |  Create a Rediffmail account
Rediff.com  » News » Why it is tough to trust the ISI

Why it is tough to trust the ISI

There have been three interactions between R&AW and the ISI before reveals B Raman, warning of the perils of dealing with the treacherous Pakistani spooks.

According to the Express Tribune, a Pakistan newspaper, as cited by Rediff.com on August 13, a proposal, possibly originating from the US, for an interaction between the chiefs of Pakistan's Inter-Services Intelligence, ISI, and India's Research and Analysis Wing, R&AW, is presently under examination by the Pakistani authorities.

Rediff reported as follows: 'The proposal is among "numerous mechanisms" being explored to reduce the trust deficit between the two neighbours, the Express Tribune quoted official sources as saying.'

'It quoted a source as claiming that the US was instrumental in persuading the two countries to discuss the possibility of a meeting between the heads of the Research and Analysis Wing and Inter-Services Intelligence.'

A Pakistani official was quoted as saying that several proposals, including regular interactions between the security agencies of the two countries, were on the table.'

There is no way of knowing whether the Express Tribune report is correct; if so, whether a similar proposal has been received by the Government of India and what New Delhi's reaction has been to it.

Regular liaison relationships and sporadic liaison interactions, without involving a regular relationship, between the external intelligence agencies of even adversary States are not uncommon.

At the height of the Cold War, the USA's Central Intelligence Agency was reported to have had liaison interactions with its counterparts in the erstwhile USSR and China.

From the limited information available in the public domain regarding these interactions, it appeared that these interactions were used by the US as a mechanism for discussing sensitive issues away from the glare of publicity and for providing the political leadership with deniable means of remaining in touch with its counterparts in the USSR and China without the media coming to know about it.

Though intelligence of mutual interest might have been exchanged during these interactions, that was probably not its primary purpose.

The initiative for these sporadic interactions, which were held at the height of the Khalistan terrorist movement, came from the then crown prince of Jordan, who was a good friend of Rajiv Gandhi and General Zia-ul Haq, then in power in Pakistan.

India was making serious allegations, in private and public, regarding ISI assistance to the Khalistani terrorists. The Jordanian crown prince reportedly felt that it would be better to discuss such allegations in deniable meetings between the chiefs of the two agencies instead of voicing them in public.

These three interactions did not have any impact on the ISI's support for the Khalistan terrorist movement, which continued to be as strong as ever.

The only seemingly beneficial outcomes of these three meetings were the Pakistani expulsion of four Sikh deserters from the Indian Army who had sought political asylum in Pakistan and informal discussions on certain ideas emanating from the two sides on possible ways of solving the Siachen dispute.

These three interactions were not followed up in subsequent years due to strong misgivings in the minds of the political leadership in India regarding the utility of such interactions from the point of view of our national security.

In the case of the US, the intelligence agencies of the USSR and China were not engaged in attempts to destabilise the US through the use of terrorism in the US territory as a strategic weapon.

In the case of India and Pakistan, the issue is complicated due to the ISI's role in fomenting terrorism against Indian nationals and interests.

Moreover, there was a fear that the ISI might exploit liaison interactions and relationships to penetrate the Indian intelligence and security set-up.

Proposals for the revival of sporadic liaison interactions between the heads of R&AW and the ISI did come from the US after the Mumbai blasts of March 1993, but P V Narasimha Rao, the then prime minister, did not react to them positively.

One understands that from time to time the US continues to float suggestions for a revival of the liaison interactions to reduce the hostility and suspicions between the intelligence communities of India and Pakistan.

These ideas probably remained a non-starter due to lack of enthusiasm from Islamabad as well as New Delhi.

One finds it difficult to understand why the US should revive these ideas now when there is a serious trust deficit between the intelligence communities of the US and Pakistan.

Over 60 years of an intense, formal liaision relationship between the ISI and the CIA did not come in the way of the ISI stabbing the CIA in the back by giving clandestine shelter to Osama bin Laden in Abbottabad.

The shelter given to bin Laden demonstrated clearly the ISI's perfidious mindset, whether towards friends or foes.

One should not now be open to such ideas as in the past due to two reasons. The first is the incident relating to bin Laden. The second is the book on the penetration of R&AW by the CIA through Major Rabinder Singh written by Amar Bhushan, the then No 3 in R&AW who was, inter alia, responsible for counter-intelligence.

Amar Bhushan has given his book titled Escape To Nowhere the cloak of fiction, but everyone reading it will know it is about the way R&AW's then leadership, including Amar himself, dealt with Rabinder Singh before he escaped to the US in May 2004 after giving R&AW's surveillance teams a slip.

Even though the book is a mix of facts and fiction, any intelligence professional reading it between the lines would not fail to notice that the CIA managed to penetrate R&AW and ultimately whisked Rabinder Singh out of India right under the nose of R&AW by noticing and exploiting serious weaknesses in R&AW's counter-intelligence and security armour.

One does not know whether these weaknesses have since been addressed and removed and whether R&AW and the rest of our intelligence community are now in a better position to prevent penetration of their set-up by hostile agencies like the ISI.

Unless and until these deficiencies are removed and a professional culture of acting in unison becomes the accepted norm in our intelligence community, we should not rush into reacting positively to any ideas for liaison interactions and relationships with the ISI.

B Raman retired as additional secretary in the Cabinet Secretariat. 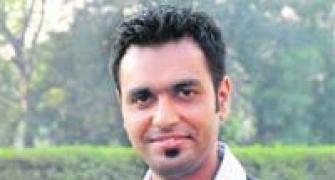 'USSR may be past, but weapons of the era remain'