'Fearful of losing strategic advantage, the only option for Pakistan is to rattle its nuclear sabre!'
'Pakistan thereby hopes to play on the worldwide fear of an outbreak of nuclear war in South Asia,' says Colonel Anil A Athale (retd). 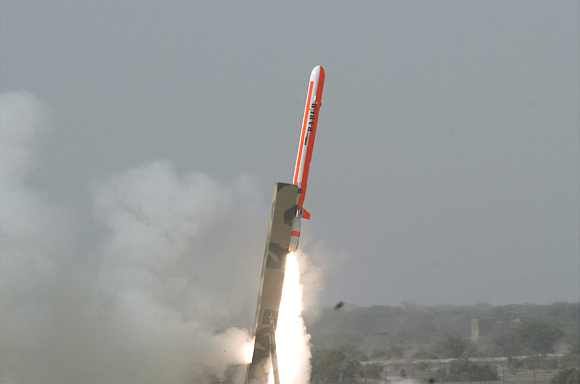 The cardinal rule about nuclear war is that it can never be won and therefore should never be fought. 'Deterrence' or the threat of use of nuclear weapons is the time tested strategy.

Given the serious nature of the AFTER-effect of nuclear weapons, nuclear threats are not routinely uttered. In fact, these are serious issues of national policy and survival and are to be uttered only in the most dire circumstances.

Frequent use of nuclear threats can lead to the 'crying wolf' syndrome, detract from credibility and ultimately can be disastrous as it may result in accidental nuclear war, not wanted by either party.

But this is precisely what Pakistan has been up to in the dying days of 2017.

In the second week of December, Pakistan's national security advisor in an address at the Centre for Global and Strategic Studies warned of a possible nuclear war between India and Pakistan.

This sabre rattling is a sign of serious Pakistani unease at India's upgraded ties with the United States and is aimed at getting outside powers (read China) to upgrade its own level of defence relations with Pakistan.

Pakistani troops violated the ceasefire over 720 times until October this year along the Line of Control and the international border. While the Pakistani side of the border is heavily populated, the Indian side is sparsely so.

Many important towns of Pakistan's Punjab province, home to its soldiers, are well within the range of Indian guns. Thus, both demography and geography favours India. Border firing incidents hurt Pakistan more than it hurts India.

The US national security document clearly identifies India as an ally and rising power.

The only references in the US document to Pakistan are about its support to and harbouring of terrorists. The shift in American policy from the Cold War era when Pakistan was the most allied of its allies is complete.

In addition to these international trends, India has been following a policy of no talks with Pakistan till terrorism ends.

India has also been responding to border violations with a matching and disproportionate response.

A major military operation is ongoing in Kashmir that has resulted in the killing of close to 200 insurgents this year, the highest figure in the last ten years.

The long rope given to the separatists has been severed and their financial dealings are being brought under scrutiny.

All in all, a 'hard' policy in relation to Pakistan has been put in place.

A natural corollary to this strategy is to build up Indian conventional military capability since India directly confronts China on the Himalayas.

It is a delicious irony that precisely this argument prevailed during the Cold War when under the guise of fighting Communism, the US built up Pakistan's military capability.

All through the Cold War years, Pakistani armed forces, thanks to generous American aid, always enjoyed a technological edge over India.

Pakistan is jittery because it knows very well that China cannot replace the US in terms of high tech arms.

In addition, with India joining the Missile Tech Control Regime and the latest Wessanaar Arrangement, India's indigenous arms production is set to take off.

It is only a matter of time before India also acquires a defensive shield against the threat of Pakistani missiles and at the same time develops its air power (with air launched cruise missiles) to launch a preventive strike on Pakistan's air force as well as missile locations.

The refinement of Indian forces in conventional weaponry leads ultimately to domination in non-nuclear aspects of security.

It is true that the Pakistani nuclear deterrent retains its potency.

Theoretically, a disarming preventive strike is an impossibility. The Indian strategy of making Pakistan pay a high price for its low intensity war of 'a thousand cuts' is that it makes the strategy to acquire Kashmir through this method redundant

Thus, the tactical level changes ushered in by India have forced a strategic change for Pakistan.

In this situation of losing strategic advantage, the only option for Pakistan is to rattle its nuclear sabre!

Pakistan thereby hopes to play on the worldwide fear of an outbreak of nuclear war in South Asia that can have global environmental effects.

In addition, the use of nuclear weapons for the first time since World War II can have dangerous political consequences.

The breaking of the nuclear taboo can usher in nuclear anarchy.

No country in the world is prepared for it. This is Pakistan's last gambit, reckless enough for even its staunch ally, China.

In this changed scenario, Pakistan's goal of annexing Kashmir becomes even more distant. But giving up its obsession over Kashmir is politically impossible for any Pakistani leader, civil or military.

Pakistan is rattled because it is caught between the devil and the deep sea and sees no way out.

Giving up a national popular obsession over Kashmir is easier said than done! 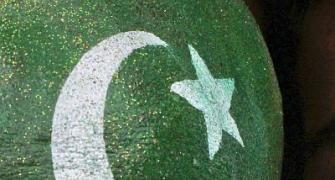 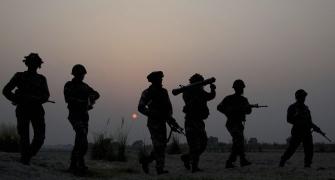