News
Business
Movies
Sports
Cricket
Get Ahead
Money Tips
Shopping
Sign in  |  Create a Rediffmail account
Rediff.com  » News » Why is officer-men relationship declining in the Army?

Why is officer-men relationship declining in the Army?

Is the Indian Army feeling the heat of being in perpetual operations? Are our soldiers' stress levels peaking dangerously? Making them prone to acts of indiscriminate violence? asks Nitin Gokhale.

Is the famed officer-men relationship in the Indian Army on the verge of a breakdown? How should one read recent incidents of indiscipline, rebellion/revolt, physical scuffles and suicides in the Army?

If you ask the top brass, most tend to brush aside the incidents as aberrations. Army Chief General Bikram Singh had in fact asserted that the suicide in an armoured unit in Samba and the subsequent fracas between officers and men was not related.

On Monday, September 3, Defence Minister A K Antony contradicted the army chief's assertion. In a written answer to the Lok Sabha, Antony said: 'The incident of suicide by an army personnel on 8th August 2012 in the Samba sector of Jammu and Kashmir led to unrest.'

On the face of it, the development is a major worry since absolute trust between officers and men in the Indian Army is the bedrock on which the combat units are built.

Indeed, when a former vice-chief of the army Staff, Lieutenant General Vijay Oberoi also says it's a matter of concern, it's time to take note.

In a recent article General Oberoi says: 'Three incidents of collective indiscipline by jawans in the last few months, reflecting a breakdown in the traditionally close officer-man relationship, are a cause for concern, especially as all three of them are related to combat units, where a stable and healthy officer-man relationship is an article of faith.'

And yet, some of the breathless commentary in the media attributing the breakdown to 'clash of class' between officers and men is born out of incomplete understanding of the working of the Indian Army.

Yes, there is a problem. But the problem is an outcome of a combination of factors: Erosion in the soldiers' status in the society, prolonged deployment in monotonous and thankless counter-insurgency jobs, crippling shortage of officers' in combat units and ironically easier communication between families and soldiers!

The Samba incident compels me to ask: What is it that drives a jawan to desperation? Is it just the tension of operating in the counter-insurgency? Or is there something more to it than meets the eye?

There are no straight answers but figures available since 2003 clearly indicate that that the Indian Army is facing one of its biggest challenges in history. Consider the figures:

Given that India has an 11-lakh strong army, these numbers may not be huge but for a force that prides itself on its standards of training and discipline, it is certainly a matter of concern if not alarm.

One can also point out the fact that in the American army this year alone the rate of suicide (till June 8) was one-a-day. That's hardly a consolation.

Therefore, it's time to ask the question: Is the Indian Army feeling the heat of being in perpetual operations? Are our soldiers' stress levels peaking dangerously? Making them prone to acts of indiscriminate violence?

There is no denying the fact that come summer, winter or rains, soldiers continue their daily patrols along the Line of Control in Kashmir. Every day and night at least a thousand foot patrols spread out in Jammu and Kashmir to try and corner terrorists. The job is risky and can even get monotonous. A bullet can come from anywhere any time. So one has to always be alert. But the chase is mostly futile. Nine out of ten times the patrols return empty-handed.

After nearly 14 years of counter-terrorism in Kashmir, the army has got used to the apparent hardship of uninterrupted operations. The fear of the enemy, claims each man that I have talked to, is nominal. 'We have no tension in this respect (counter-terrorism, counter-insurgency), we had joined the army precisely for this kind of work,' is the constant refrain from soldiers.

Officers say their biggest duty is to ensure that men are fully trained to face any situation in counter-insurgency, counter-terrorism.

'A fully-trained soldier is a confident soldier and effective soldier,' commanding officers say whenever one meets them.

But this practised auto-reply could cloak a very different reality.

A psychiatric study by army doctors a couple of years ago on 'Evolving Medical Strategies for Low Intensity Conflicts' revealed the huge range of issues soldiers in such situations have to confront, contradictions between war and low intensity conflict situations and particularly the concepts of 'enemy', 'objective' and 'minimum force'. There are no clear-cut victories like in wars. Some other findings were:

Leading psychiatrists also feel that there is disconnect between what a soldier is trained for and what he ends up doing in low-intensity conflicts.

I remember that some years ago Dr Nimesh Desai, a psychiatrist, had told me: "There is a certain dissonance in what the soldier feels when he operates in low intensity conflict. He is trained for war, to go all out against an enemy but in insurgency, he is told to hold back. Plus there is no end in sight for such operations. It is the constant tension that gets him."

Operating in a tension-ridden counter-insurgency environment does lead to certain stress among the jawans, but that is only one of the factors.

The main worry are the problems back home -- land disputes -- tensions within the family, rising aspirations, lack of good pay and allowances, and also the falling standards of supervision from some officers, all these factors have led to major stress.

Company commanders who lead field units in counter-insurgency situations also believe that tensions at home transmit themselves much quicker today. Since almost 80 per cent of India's foot soldiers come from rural and semi-urban areas, most of them have strong links with the land.

For the ordinary soldier, the smallest patch of land back home is the most precious property. Again, I have frequently come across a common thread where soldiers say there is no tension in actual work of counter-insurgency. The main problem for the fauji comes from his domestic situation.

Very often land gets encroached in his native village or there is a dispute over even the smallest of property. "There is always a tension. The police don't listen to us. My parents feel helpless, I become tense every time I go back home," I remember a soldier telling me in the Kashmir valley.

One more common thread among soldiers from Rajasthan to UP, from Tamil Nadu to Haryana was how little respect they seem to command today in a society which devalues their work.

As a former army commander had once pointed out: "You see he comes from a society where he compares himself with others and when he realises that he is at a disadvantage since acceptance wise, the kind of respect that his predecessors had is no longer there."

Senior officers point out that most suicide and fratricide cases take place after soldiers return from a spot of leave. The feeling of frustration can bring in helplessness which in turn leads to suicides and fratricide, it creates an impression that no one listens to the army. It is the system that sends the man in uniform into a depression.

It is precisely this concern that had prompted Defence Minister A K Antony to write to all chief ministers some years ago asking them to sensitise district administrations in their states to the needs of the soldiers. State governments were asked to set up a mechanism at district and state levels to address soldiers' grievances.

The harsh reality is that men in uniform no longer command the respect they did in the early years after Independence. Today, they have to fight for getting equivalence with officers of Group A central government services!

And yet, the army must look within too.

Soldiers these days are better educated and consequently better aware of their rights. This, coupled with falling standards of command and control among some of the undeserving officers who have risen to command units, is becoming a major cause for worry.

An acute shortage of officers at the cutting edge level is the other big factor contributing to an increasing gap between soldiers and officers. Against an authorised strength of over 22 officers for a combat battalion, there are at best 8 or 9 officers available to the Commanding Officer these days.

Very often young officers with less than two years of service are commanding companies! Even in the battalion headquarters, one officer ends up doing the job of three given the shortage. There is no time to interact with soldiers. In the old days, a game of football or hockey was the best way to get to know each other. Not any longer.

Moreover, soldiers no longer accept a wrong or unjustified command blindly. The old attitudes among some of the COs, of lording over ORs and expecting them not to protest/revolt must change.

It is ironic that while there is a shortage of over 12,000 officers in the army, the majority of staff postings are fully subscribed, but combat units have to do with bare minimum strength!

While there is no single reason that can be cited as THE cause for suicides and recent standoffs that have happened in quick succession, the army leadership will have to take a hard look at the disturbing developments and come up with quick but effective solutions.

Apart from increasing the intake of officers, the army leadership will have to take a conscious decision to post more officers in combat units and make do with shortages in the staff.

Reportedly, the new Military Secretary, Lieutenant General Ata Hasnain, a compassionate soldier himself, has been tasked with formulating a new human resource policy for the army. One hopes, he comes up with innovative ideas to nix this new menace in the initial stage.

Nitin Gokhale is the Security and Strategic Affairs Editor at NDTV. 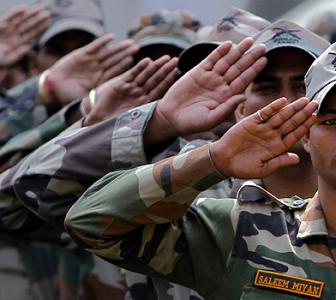 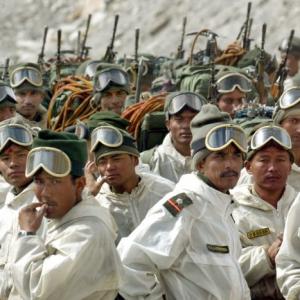 846 Indian soldiers have died in Siachen since 1984