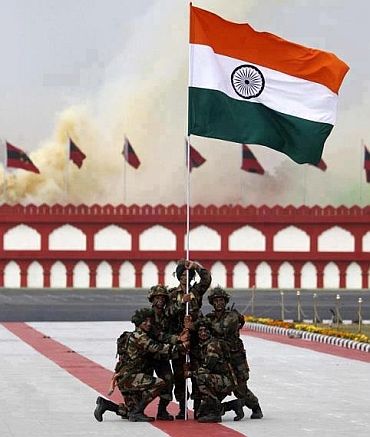 'We rarely choose to fight when the threat is still a nascent threat.'
'When we do fight, we fight when the invaders reach Panipat and are preparing to knock on the gates of Delhi,' says Brigadier Gurmeet Kanwal (retd).

In a perceptive analysis of India's strategic culture in a recent article ('Does India have a strategic culture? Yes, it is slowly beginning to develop one'), Air Marshal Arjun Subramaniam quotes George Tanham, formerly of the RAND Corporation, as having concluded that 'India lacks a strategic culture.' Does it really?

Actually, India has a very distinctive strategic culture. India's strategic culture has always been one of timidity, of helpless rage -- that of behaving like a soft State that whines, but does not retaliate even in the face of the gravest provocation.

We tend to blame all our national security problems, like everything else, on our karma and are historically and culturally habituated to offer the 'other cheek' when slapped on one.

Our five thousand-year-old 'glorious civilisation' has conditioned us to suffer in silence.

We have always believed that ours is the land of peace, of Ram Rajya, of Gautam Buddha and Mahatma Gandhi -- the land of renunciation and ahimsa.

Ours is the defenceless land that was trampled upon and ravaged through the ages by barbarian invaders from the West who poured through the Khyber Pass.

By Alexander the Great of Greece. By Mahmud of Ghazni -- 17 times. By Muhammad Ghori. By Changez Khan. By Timur, the Lame. By the Mughals. By Nadir Shah. By the East India Company that ruled India by pitting Indians against Indians.

And now, by the so-called mujahideen -- rapists, cold-blooded murderers, looters, terrorists -- soldiers of fortune. Anything but the jihadis they claim to be.

Our strategic thinking is plagued by what Air Commander Jasjit Singh, former director, Institute for Defence Studies and Analyses, had characterised as the 'Panipat Syndrome.' We rarely choose to fight when the threat is still a nascent threat. When we do fight, we fight when the invaders reach Panipat and are preparing to knock on the gates of Delhi.

When threatened, almost invariably, our response has been to shy away from taking the initiative and delivering a knockout punch. We tend to seek refuge in the moral high ground.

In 1948, when the Indian Army was knocking on the gates of Muzaffarabad, we took our case to the United Nations Security Council and pulled a stalemate (if not defeat) out of the jaws of victory. Almost one-third of Jammu and Kashmir is under Pakistani occupation and we call it an 'issue', not a dispute.

In the 1950s, we not only rushed to recognise China's sovereignty and suzerainty over Tibet (arguably the real Himalayan Blunder) but failed to even ask our 'Hindi-Chini Bhai-Bhai' friends to settle the land border as a condition for our support.

In 1962, Prime Minister Jawaharlal Nehru first approved the disastrous 'forward policy' against military advice and then ordered an ill-equipped and ill-clad Indian Army to 'throw out the Chinese.'

We were the foremost advocates for a permanent seat in the UN Security Council for the People's Republic of China. Till today, China has not reciprocated our magnanimous gesture.

We choose not to learn a key lesson of history: There is no place for gratitude in international relations.

When China went nuclear in 1964, we clandestinely pursued a nuclear research programme and, ten years later, carried out a 'peaceful' nuclear explosion, but failed to weaponise and sign the Nuclear non-Proliferation Treaty as a nuclear-armed State.

When we did weaponise in May 1998, the wrath of the international community descended on us. Mercifully, Prime Minister Atal Bihari Vajpayee had the courage to run the gauntlet.

To the victor go the spoils of victory, but, in 1971, after India's greatest military victory, we repatriated over 90,000 Pakistani prisoners of war without resolving the Kashmir dispute or extracting any other concession because of our innate belief in being magnanimous in victory.

Over a quarter century of Pakistan's low-cost, high-payoff 'proxy' war has elicited only a muted response from us. We have opted to fight the proxy war within our own territory when its roots clearly lie in Pakistan occupied Kashmir and Pakistan.

Despite having a 7,600 km coastline and a 2.2 million square km Exclusive Economic Zone, as a nation we lack a maritime tradition.

In keeping with our strategic culture, or lack of it, our national security decision-making apparatus is woefully inadequate, as was evidenced while dealing with the terrorist attack on the Indian Air Force base at Pathankot in January.

We are the only major democracy in the world in which the headquarters of the armed forces are not functionally integrated with the ministry of defence. We still do not have a chief of defence staff.

Our defence budget has declined to 1.74 per cent of the GDP and is now almost as low as it was just before the 1962 debacle. Contrary to what the bureaucracy in the MoD might say, our defence preparedness has declined to precariously low levels in terms of the obsolescence of weapons and equipment and the stocking levels of critical items of ammunition.

We do not educate our officers in strategic studies. We still do not have a National Defence University. Only a handful of universities have defence studies departments and even these find it extremely difficult to attract students. 'Generalist' bureaucrats provide inputs for defence policy decisions to the political leadership.

In the words of H M Patel, India's first defence secretary, 'The ignorance of civilian officials in defence matters is so complete as to be a self-evident and incontrovertible fact.'

Sadly, we appear to be headed for yet another military disaster if do not shake ourselves out of our slumber.