In the concluding part of the series, Y V Reddy argues that the proposal strikes at the functioning of federalism and the basic structure of the Constitution, which has served us well so far.

IMAGE: The columnist argues that an unstated motive for advocating simultaneous polls is perhaps, to give an advantage to national parties over regional ones. Photograph: Adnan Abidi/Reuters

It is no secret that in recent years, whenever simultaneous elections are held, candidates chosen for election to Parliament by political parties undertake to finance party candidates for assembly elections. The non-electoral gains out of electoral victory in Parliament are infinitely more than at the state level. National parties have what may be described as “economies of scale” if elections are held simultaneously with a clear disadvantage for regional parties, both in the Parliamentary and the legislative levels.

Further, most of the innovative programmes and some of the schemes -- such as food security and employment guarantee -- were conceived and implemented by different state governments by virtue of the diversity in approaches to development brought about by the existence of regional parties.

Another unstated motive for simultaneous polls may be to overcome the difficulties faced by those elected as the prime minister in fulfilling the promises that they delivered at the time of Parliamentary elections. The problem arises mainly because prime ministerial candidates make promises on subjects that are predominantly in the jurisdiction of the states and not the Union government. The existing dispensation may appear to be constraining the execution of such promises.

The stated motive is to enhance stability through simultaneous polls which would add to nation building efforts. The belief in political stability being an advantage by itself is shared by many. These are evident in the Report of Parliamentary Committee (Para 20):

'The Committee… expresses confidence that a solution will be found to reduce the frequency of elections which relieve people and government machinery being tired of frequent electoral processes. This is important for India if it is to compete with other nations in developmental agenda on real time basis as robust democratic country.'

The implicit assumption in the report of the Parliamentary Committee is that simultaneous elections would produce better environment for development. Empirical evidence, however, indicates that during the period of synchronised elections, the economic performance of India has been poor both in comparison to other countries and in comparison with our subsequent performance.

The case for simultaneous polls is also made because of the impression that frequent elections result in instability in policy-making and thus growth is affected. At the national level, elections were held within two years of the term on three occasions. There is no evidence that growth was affected during this period relative to the decades when the full cycle was not disturbed. Similarly, it will be interesting to study the impact of economic performance in the states that had to undergo elections more frequently than required, as per the normal electoral cycle.

In brief the proposal for simultaneous polls has significant implications for the party system, the functioning of federalism, and indeed the basic structure of the Constitution.

Dr Ambedkar laid out the unique features of our Constitution when he introduced the draft Constitution for the approval of the constituent assembly. He explained the rationale for our parliamentary system with continuing accountability and for a Union of States. The latter eschewed separate citizenship for the Centre and the state but provided for separate legislative bodies with division of powers.

It is useful to recall the grand design that Dr Ambedkar crafted. On the form of government, he said: “The daily assessment is done by members of Parliament, through questions, resolutions, no-confidence motions, adjournment motions and debates on addresses. Periodic assessment is done by the electorate at the time of the election which may take place every five years or earlier. The daily assessment of responsibility which is not available under the American system is, it is felt, far more effective than the periodic assessment and far more necessary in a country like India. The Draft Constitution in recommending the Parliamentary system of executive has preferred more responsibility to more stability.”

Is the proposal not tilting in favour of more stability and less responsibility?

On the form of the Constitution, Dr Ambedkar said: “Two principal forms of Constitution are known to history -- one is called Unitary and the other Federal. The two essential characteristics of a Unitary Constitution are: (1) the supremacy of the central polity and (2) the absence of subsidiary sovereign polities.

The proposal for simultaneous polls cuts at the root of this grand design of the Constitution based on dual polity that has served us well so far.

Hence, the proposal should be dropped by addressing the concerns of those who advocate it within our Constitutional structure -- a federal structure that served the country well for seventy years -- a singular achievement in South Asia and, perhaps, the whole developing world.

Y V Reddy is a former governor of the Reserve Bank of India. 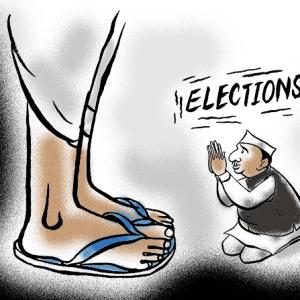 India must reject once in 5 years polls