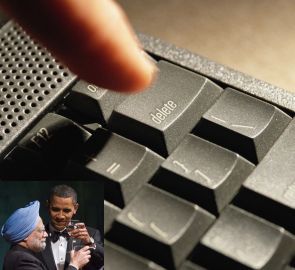 'Prime Minister Manmohan Singh may be anxious for a farewell visit to Washington in October,' says retired Ambassador K C Singh, 'but bending backwards on America's PRISM policy is going to earn him scorn at home and contempt abroad.'

Edward Snowdon, an employee of a National Security Agency contractor, sent the mighty United States into a paroxysm, on fleeing to Hong Kong in the first week of June.

The timing could not have been worse for the United States, as it was on the eve of the 'shirt-sleeves' summit between newly installed Chinese President Xi Jinping and President Barack Obama.

The US side had made it known that one of the primary areas of focus at the summit would be cyber theft of US technologies by Chinese hackers with links to the People's Liberation Army.

The pursuer instead became the pursued with Snowdon revealing the US's gargantuan intelligence gathering capability and its blatant misuse against friend and foe.

Secretary of State John Kerry, during his India visit, when asked about the cyber snooping explained during a joint press conference on June 24 with his Indian counterpart Salman Khurshid watching protectively, that the PRISM program was only about computer study of patterns rather than the content of communications.

But that is not what the two subsequent stories indicated. Khurshid, solicitous during the Kerry visit to the point of correcting a journalist who inquired if he had raised the matter during the talks, termed the question as wrongly framed. He said it was discussed, without explaining how that happened if he did not raise it.

This attitude verging on sycophancy persisted into Khurshid’s travel abroad for the ASEAN foreign ministers meeting. When quizzed in Brunei he kept up his ill-informed chatter, appearing to defend US actions.

The truth as it has so far emerged is shocking.

The US programme rests on five eyes, consisting of the US, Canada, the United Kingdom, Australia and New Zealand. These are points used for tapping into the international flow of cyber data through fibre optic cables. It is alleged that over 80 major global corporations, consisting of telecommunication companies, producers of network infrastructure, software companies and security firms, are actively assisting the US.

The question that should have occurred to the Indian external affairs minister is whether some of these are in India or even Indian-owned. A thorough internal investigation is needed to ferret out wrongdoers on Indian soil if any. The Indian home ministry has been focused only on Chinese companies entering India and perhaps not paid enough attention to US or Western ones.

Even in Europe, the most data collected is in Germany, perhaps because Frankfurt is a hub for data transmission and Germany is a serious business rival for big US corporations. The Kerry defense, which the US has been repeating interminably, is that US is doing it for fighting the menace of global terror and that compromising the integrity of Internet-based data transfers was a small price for the larger good of the operation.

Similar justification was given for the reprehensible interrogation technique of water-boarding which in retrospect has produced uneven results.

All told, perhaps ten odd global terror attacks may have been disrupted. The US may have got David Headley, but it was only after the 26/11 attacks and only when they were tipped off by the Europeans about him. The PRISM data may have been useful to nail his earlier activities, but it did not prevent the attack from taking place. Similarly, the Boston marathon bombing slipped below the radar of the US program.

Finally, the issue that Snowdon raised is unanswered that the metadata collected at the Utah facility can be misused ex post facto against an ally turned foe in future, as it lies dredged in huge quantities.

Therefore what the US is doing is not classic eavesdropping, not the cloak and dagger techniques of the 20th century, but what Der Spiegel calls 'structural acquisition of data.'

What makes it reprehensible is that with the servers being in the United States it was their moral responsibility to ensure the integrity of the Internet and related services.

Having not only failed to do so but in fact having subverted it for their own national security and even business- related goals, the US has forsaken its right to control it. The Europeans were shocked to discover that telephones in sensitive European Council offices were being remotely activated for listening from a facility in Brussels, near the NATO headquarters, that turned out to be the European branch of the US’s NSA.

That India was at number five out of the 30-odd nations receiving the NSA's attention should have raised the red flag in India. Instead, Khurshid was still stuck at the Kerry explanation of two weeks ago. This is startling ignorance for a minister in today’s world where in seconds a changing situation can leave you suspended between wisdom and stupidity.

The issue of international control, or at least supervision over the global cyber infrastructure and the servers, have been raised at the United Nations. The US reaction has been a wave of their hand to dismiss it.

The tide may well turn now where the US counter-terrorism argument may be seen as a mere Trojan Horse to enable them to piggy-ride their snooping for purely national purposes.

India needs to not only speak up, but take the lead. Prime Minister Manmohan Singh may be anxious for a farewell visit to Washington in October, but bending backwards is going to earn him scorn at home and contempt abroad.

While he cogitates over this, he must at least gag the garrulous Salman Khurshid. 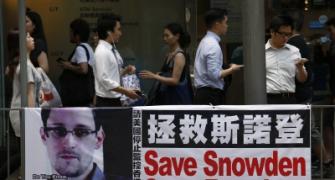 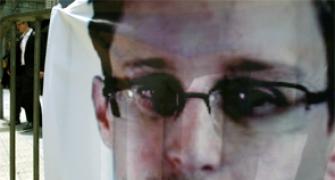 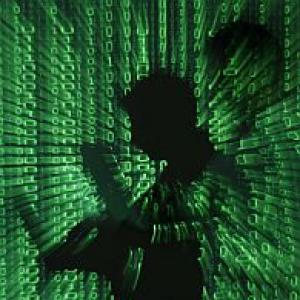 It is not actually snooping: Khurshid on US surveillance 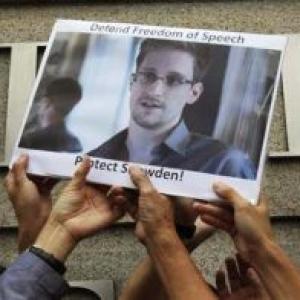