'We have not taught children their rights and responsibilities, nor life skills,' says Mitali Saran.
Illustration: Dominic Xavier/Rediff.com 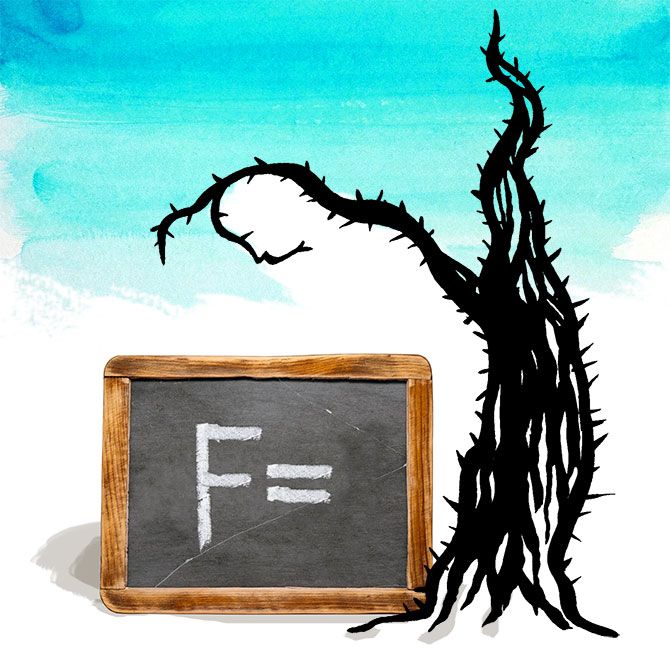 Most parents' number one priority is to give their kids the best possible chance in life.

A basic 'three Rs' education -- reading, 'riting, and 'rithmatic -- is a ticket upward from misery; a reasonable education is a chance to make it to the middle class dream; and an excellent education can turn the world into your oyster.

The street-smart and the gifted might still make it with a poor education or none at all. Some of the privileged are born having made it.

But for the average kid, the classroom is where temperament, talent and skill are honed into greater empowerment.

Educated children make a better citizenry, and a better workforce. It's what you might call a no-brainer.

As a nation, we've Constitutionally guaranteed our children's right to an education -- but that's about it.

One of our most unfortunate national traits is to adore a few visible successes, and ignore the unglamorous need to improve the fundamentals.

That's how you get expensive marble on the floor but seepage from the ceiling;
sports cars crawling their way between potholes;
Digital India before adequate electricity or Internet access.

It is why we have only handfuls of amazing alumni from a handful of rigorous institutions, and thousands of free schools incapable of teaching a basic standard.

We've spent so long priding ourselves on star institutions that we've forgotten to fear for the millions of unremarkable children who attend thousands of RTE-mandated schools that are no more than a couple of rooms, where teachers either don't show up, or faithfully replicate unjust societal structures and behaviours in their classrooms, privileging higher-caste children, imposing gender injustices, and in the best case, not deviating beyond a dubious syllabus.

Schools and universities, which should be spaces of learning and questioning, are increasingly becoming political battlegrounds, fought by the likes of Rajasthan's School Education Minister Vasudev Devnani who last year denied that the government had anything to do with the excision of Nehru, and Gandhi's assassination by Godse, in the social science textbook -- but who also said clearly that the state was redesigning textbooks to make sure they didn't produce any more Kanhaiya Kumars.

It is the same Devnani, along with former higher education minister Kalicharan Saraf, and Urban Development and Housing Minister Rajpal Singh Shekhawat, who today is backing a proposal to redesign a university syllabus with what the world now mockingly calls 'alternative facts.'

In this case, they wish to re-imagine the Battle of Haldighati between Akbar (in Rajasthan they've dropped 'the Great' from the books) and Rana Pratap, so that Rana Pratap wins.

That's not academia, it's political brainwashing.

In a fine example of everything that is wrong with the RSS-BJP educational orientation, Kalicharan Saraf was quoted as saying: 'A distorted version of history has been taught to generations of students. But the fact is that Akbar was a foreign invader and Maharana Pratap was a brave, patriotic ruler. And if there is a proposal to correct this mistake and tell students that Maharana Pratap actually won the battle, then what is wrong with it?'

There is no shortage of educational ugliness.

A recent environmental studies textbook tells kids to enclose a kitten in an unventilated box, and contemplate, from its eventual death, the value of oxygen. What kind of cruel moron thinks this up, and what kind of profiteering moron publishes it?

In a Maharashtrian social sciences textbook, a bridegroom can ask for more dowry if the bride is ugly or handicapped. It makes you hold your head in your hands.

We have not managed to commit ourselves to integrity in education -- to getting the best educators, to sticking to fact, questioning, evaluating things honestly, and encouraging critical thinking and fearless expression.

We have not taught children their rights and responsibilities, nor life skills.

We impose loyalty on our citizens by diktat -- in adulthood as well as in childhood -- instead of earning it.

The bottom line is that if you neglect the rot at the base, it eventually vitiates the top.

A country that gives its history into the custody of politicians, and gets unqualified people to teach its children, is skidding down a slippery slope, fast.

Politics will always try to discredit reason for its own ends; citizens have to be able to call that out.

The alternative is a creeping stupidification, and creeping authoritarianism.

That we think of teaching as a kind of lame, last resort, part-timer's profession that needn't be paid much, will probably be our downfall.

We should be treating our educators like VIPs -- giving them the best training, and the best incentives to take their service to the remotest corners of India.

That would actually change the face of the country for the better. But there's that creeping stupidification. 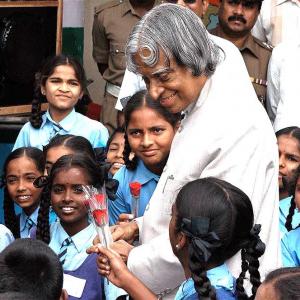