News
Business
Movies
Sports
Cricket
Get Ahead
Money Tips
Shopping
Sign in  |  Create a Rediffmail account
Rediff.com  » News » Why India cannot afford to give up Siachen

The strategic advantage accruing to India in Siachen should not be given up for apparent short-term political gains. Giving up Siachen as a gesture of friendship would also mean that its recapture would be extremely expensive to India in men and material, says Vikram Sood.

The participants: The Corps Commander and the R&AW station chief.

The subject: Siachen and reported Pakistani activities in that region according to intelligence reports from across the LoC.

It would be untrue to suggest that this meeting led to the assault on the Soltoro Ridge which is actually west of the Siachen Glacier, but the fact is that the matter had assumed serious proportions and Indira Gandhi's government was deeply concerned.

The reports, that the Pakistanis were making probes ostensibly through tourism and mountaineering groups, were disturbing. The obvious aim of the Pakistanis appeared to be cross the Saltoro heights and head for the Karakoram Pass on the Jammu and Kashmir border with Tibet (China).

But why is this bleak part of the mountainous region so important to India that we are prepared to retain it all these years. The Saltoro Ridge is a formidable ridge that runs roughly north-west to south-east. It overlooks Gilgit and Baltistan to its west and has to be crossed by any one seeking access from Skardu in the Gilgit and Baltistan area through to the Karakoram Pass which enters Tibet. This is not to be confused with the Karakoram Highway which enters Xinjiang through the Khunjerab Pass. Any Pakistani location in Karakoram would be a threat to India in Ladakh from the north in addition to Chinese locations in Aksai Chin.

The genesis of the problem lies in the way India-Pakistan agreements were worked out in Karachi (1949) and Shimla (1972). The ceasefire line or later the Line of Control was left undemarcated from point NJ 9842, and stated that it would run north from this point. This means that north was defined as the true geographical north and not an extension of the line in the direction which would take the line to the Karakoram Pass, something the Pakistanis claimed, wanted and were willing to assert this claim with perhaps an approving Chinese nod. North of Point NJ 9842 meant north to the Siachen and not to Karakoram.

Siachen in the possession of Pakistan would have meant Pakistan would have access from Skardu through to the Karakoram near the Aksai Chin and eventual linking with Shahidullah on the Kashgar-Xigatse road that runs parallel to the Tibet- India border.

Obviously, and given the aggressive manner in which Pakistan had begun to interfere in India, among other things actively inciting Sikh extremists, India could not afford to become vulnerable on another front.

There was no option but to launch Operation Meghdoot on April 13, 1984. The Kumaon Regiment of the Indian Army with cover from the Indian Air Force reached the glacier to occupy two mountain passes at Bilafond La and Sia La while the Pakistan Army could only reach Gyong La. The battle zone was a triangle with point NJ9842 at the bottom, Indira Col due west and Karakoram Pass due east. Indian troops today control two thirds of the area and the world's highest motorable road at Khardung La with a helipad at a place called Sonam, at 21,000 feet. Pakistan overlooks the Nubra and Shyok valleys from the north. Saltoro lies almost exactly due north of Leh and north west of Kargil.

The Saltoro was attained at considerable loss of life, equipment apart from the expenses involved. There were many lives also lost to the harsh climate and the attrition rate was indeed very high in the early days of the campaign. Over time these shortcomings have been removed, the attrition rate is much lower, logistics are nowhere near as nightmarish as they used to be nearly thirty years ago.

Following the avalanche in Skardu which killed 150 Pakistani soldiers, there seems to be renewed talk that India should withdraw from the heights attained with so much sacrifice and at great cost to the nation. Siachen has recently been sneeringly described as 'A struggle of two bald men over a comb' or 'an ego problem between the two armies' and has elsewhere been described by some journalists as a futile war. Let it be said here that no war over one's own territory that is futile.

It is certainly less futile than the US campaign in Iraq. The United States, unable to solve its own problems in the region or for that matter anywhere else, and seeking an early exit from Afghanistan by obliging Pakistan, has offered to assist India and Pakistan in a dialogue. There are reports that the two defence secretaries will meet shortly to discuss Siachen and Sir Creek.

It seems that there is some great urgency to strike a deal and this is more than the usual periodic urge to concede something to Pakistan to look good. There are some Indian commentators who have even argued that India should now forget 26/11 and move forward. Nations that do not remember their past can have no future.

One of the arguments being given is that the cost of retaining Siachen/Saltoro is prohibitive. This is rubbish. At approximately Rs two crores a day it means only Rs 730 crores annually out of a budget that is in the range of Rs 80,000 crores. Even if it were more than this, is there a fixed price for security and freedom? The loss of soldiers to harsh conditions has become minimal for the last many years and the hot war has long been over.

An agreement might have been possible but Pakistani refusal to sign the Agreed Ground Position Line on a specious argument only leads to the suspicion that they would want to alter the position at first dawn. General Pervez Musharraf's Kargil adventure in 1999 was Pakistan's last attempt to change the ground position militarily and politically and also to negate the advantage of Saltoro with India.

The continuing mindset is depicted not only in the rants of Lashkar-e-Tayiba chief Hafiz Saeed but also by what appears in the English press in Pakistan, which include songs in praise of The Hafiz. The Nation in an editorial on March 12 said "We must never lose sight of the fact that Kashmir is a left over issue of the Partition, gifted to us by the British. Unless it is settled in accordance with the Partition Plan, neither the division of India would be complete, nor would the state of Pakistan be complete."

There has not been any evidence of a change of heart in the Pakistan Army -- the institution that calls the shots in Pakistan especially on issues relating to India. Everyone knows that. Thus withdrawal from these strategic heights without any iron clad guarantees that do not extend beyond declarations of intent would be the height of folly. This strategic advantage in Siachen should not be given up for apparent short-term political gains.

The China factor cannot be ignored in this cockpit of the world. It was not so evident in 1984 although the Karakoram Highway had been built by the Chinese by then and Pakistan had illegally ceded a portion of the territory under their control, Shaksgam to them. Today, the Chinese footprint is much larger. In its own strategic interests in the region, China would be interested in greater Pakistani control over Gilgit and Baltistan.

It has been investing $150 million (abour Rs 750 crore) for widening the KKH from 10 metres to 30 metres, to be used by all weather heavy vehicles, the kind that brought strategic material for Pakistan through the Khunjerab.

A rail link was also planned, to be connected with Pakistan's main rail grid, and fiber optic cables were being laid in 2007. If China had a port in Gwadar that they could use, this would cut down the distance from Xinjiang to the Arabian Sea to merely 2,500 km. Today Xinjiang is 4,500 km away from the east coast of China. Gas and oil pipelines through from Gwadar and Xinjiang make sense only if Gilgit and Baltistan is secured. It is not a question of a glacier in the Himalayan heights; it is a question of India's security.

The nation cannot afford to repeat the strategic mistakes of the past -- like halting our advance at Uri in 1948 or not capturing Skardu; or giving up Haji Pir in 1966; or returning 93,000 troops and territory in 1972.

Giving up Siachen as a gesture of friendship would also mean that its recapture would be extremely expensive to India in men and material. Today, as the other side continues to arm itself with newer nuclear weapons, has not called off its jehadi hordes and the only 'concession' it can offer us is an MFN at a future date or lunch at Lahore and dinner at Islamabad.

Pakistani hospitality is legendary but beware of the poisoned chalice. 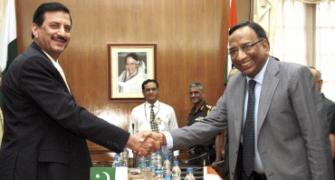 Can India-Pak EVER agree on Siachen?
Time has come to demilitarise Siachen: Zardari
'Siachen, Sir Creek issues ripe for resolution' 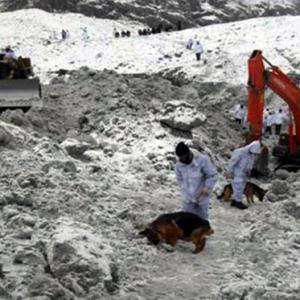