News
Business
Movies
Sports
Cricket
Get Ahead
Money Tips
Shopping
Sign in  |  Create a Rediffmail account
Rediff.com  » News » Why I think Trump will be a great President

'What Trump and Kim have demonstrated is that leaders need not remain prisoners of the status quo and they can, by showing the necessary will and courage, break out of the hang-ups and constrictions of the past and carve out a new pathway for themselves,' says B S Raghavan. 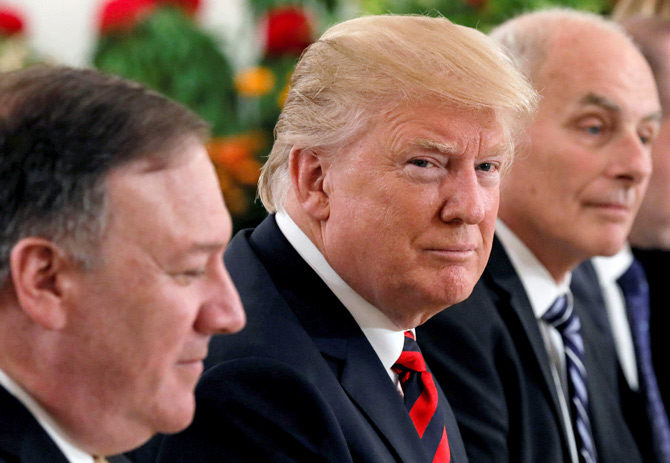 IMAGE: Will Donald J Trump go down in US history as a great president? Photograph: Jonathan Ernst/Reuters

I am hesitant to say it openly lest I be pounced upon and pulverised.

I have a suspicion that the brisk, brusque, no-holds-barred, no-punches-pulled, all-stops-pulled, tit-for-tat, tweeting Donald J Trump will go down in US history as a great president.

He has made utter nonsense of political correctness and gone hammer and tongs, and in unbridled language in public, against all things and all persons not coming up to his expectations.

He doesn't care for office files or notes, precedents or advice of officialdom and banks on his intuition, instinct and gut feeling in coming to decisions.

He blusters and bulldozes his way to his goal, brushing aside all opposition.

Those were the qualities that he found worked for him in building his extensive business empire and he is bent on applying them to administration, governance and Statecraft as well.

He is the first head of State who, in letter and spirit, more than lives up to the adages: Consistency is the virtue of an ass and Modesty is an over-rated virtue.

He has done everything that old time practitioners of governance and diplomacy would expect to tear to tatters -- the US, its constitution, its institutions and its reputation, but nothing of the sort has happened.

The US is still on its legs; its authority and influence still count; Trump is still welcome in respectable society. His constituency still wows him.

All those traits were on full display in the handling of North Korea and Kim Jong Un in the period leading up to the Singapore Summit.

There were no parallel in modern world history and the conduct of relations between nations to the venom-packed insults and ferocity of the threats hurled by Trump and Kim at each other.

For the first time, Trump found his match in Kim and found himself thrown off his stride.

With the result, right until the moment of announcement of the summit, it was unthinkable.

And then the familiar Trump with the penchant to think the unthinkable and do the impossible took over.

This is what the solid base of his admirers and supporters in the US must like about him: His breath-taking capacity to make quantum leaps in imagination.

True, Richard M Nixon too pulled off a coup of sorts by taking US-China relations out of the deep rut into which it had fallen, but he carried it out in the traditional fashion following the staid, sober, standard operating procedures.

Trump's big, bold leap into the future with reference to Kim and North Korea is fraught with shock and awe and bears the distinctive stamp of his personality in its own right. 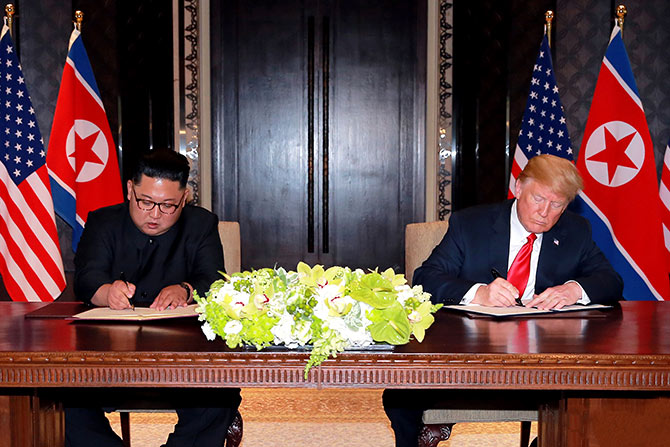 IMAGE: 'More important than the contents of the document that he and Kim signed is the very ceremony of both sitting alongside each other and signing an agreed document after all the messy brouhaha that preceded the event.' Photograph: KCNA via Reuters

To my mind, more important than the contents of the document that he and Kim signed is the very ceremony of both sitting alongside each other and signing an agreed document after all the messy brouhaha that preceded the event.

It has been a game-changer, at least in regard to the directions in which it set the course of world history.

First, it has eliminated the last remaining vestige of the Cold War era, freeing the US from the fixated complex of regarding North Korea as an outcast.

Second, it has given a thrust forward to the process of denuclearisation in a sensitive region which had all the makings of a tinder box ready to explode.

Third, it holds the promise of bringing nearer the reunification of the two Koreas, a consummation devoutly wished by the Korean people on both sides of the artificial border, that will raise the level of their progress and prosperity to a hitherto unimagined height.

Fourth, the world economy as a whole will stand to benefit immeasurably from the reduction of tensions and the resultant increased cooperation among the countries in terms of removal of barriers to trade and commerce.

Fifth, by these means, the US has effectively diluted the role of China and made itself a dominant player.

But, most important of all, what Trump and Kim have demonstrated is that leaders need not remain prisoners of the status quo and they can, by showing the necessary will and courage, break out of the hang-ups and constrictions of the past and carve out a new pathway for themselves. 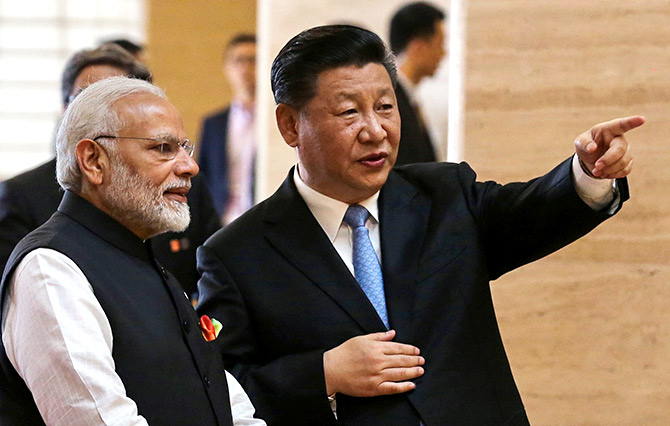 On another scale and plane, India has the example of P V Narasimha Rao, to whose dismantling in 1991 of the crippling permit-licence-quota raj into which the country had trapped itself since Independence, the Indian people all owe the faster pace of economic growth and well-being since.

One very much hoped that Narendra D Modi, who so impressively led the BJP to power in 2014 with an absolute majority of its own, and who displayed his capacity for dynamic, decisive, out-of-the-box thinking in a variety of ways beginning from his invitation to all SAARC heads of State for the swearing-in ceremony, would follow through with a spectacular entente cordiale with Pakistan and lasting border settlement with China.

There was so much euphoria in his favour at the time and he had everything going for him.

Just as it was only Nixon, with his known opposition for all that Communism stood for, who could have built bridges with Maoist China without people questioning his motives, it was only Modi, with his known passion for the nationalist sentiment and free market economy who could have got the country out of the impasse in its relations with Pakistan and China, without his motives being questioned.

Similarly, drawing on the analogy of US President Franklin Delano Roosevelt who took charge at the time of Great Depression, but rescued the country from it with a number of revolutionary measures and economic devices, Modi too, in the first 100 days, could have pushed through with little opposition the long-pending Common Civil Code, abolition of Article 370, making Jammu and Kashmir truly an integral part of India, preventive legislation against illegal immigration and sweeping administrative reforms to attune the stubborn and heartless bureaucracy to the spirit of democracy and the needs of the people.

Alas, he sadly drifted, squandered away his time and sorely missed the bus.

He has made a feeble beginning with the informal summit at Wuhan with Chinese President Xi Jinping, but everything is proceeding at snail's pace.

One hopes that the dramatic example set by Trump and Kim will perk him up.

B S Raghavan -- a former member of the Indian Administrative Service -- was also the secretary of the National Integration Council during the time of Jawaharlal Nehru, Lal Bahadur Shastri and Indira Gandhi, and worked closely with the freedom heroes. 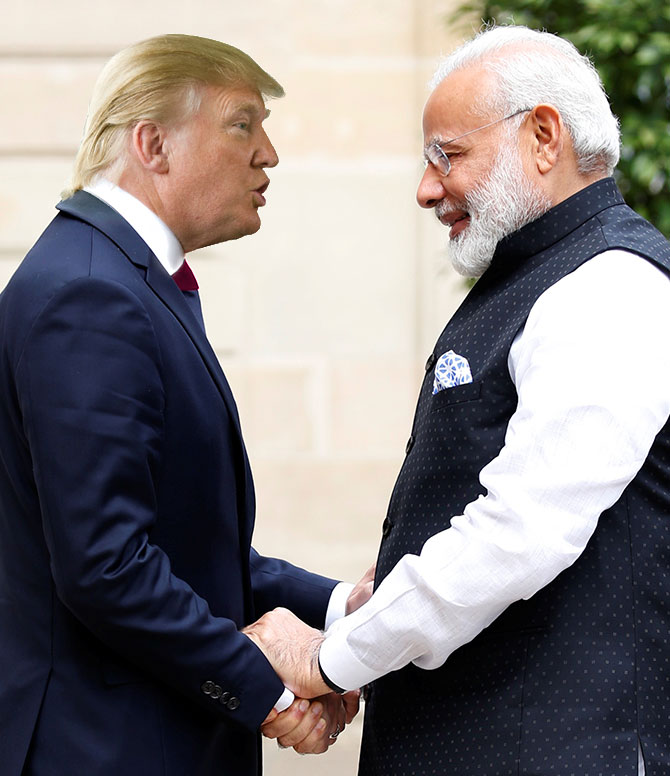 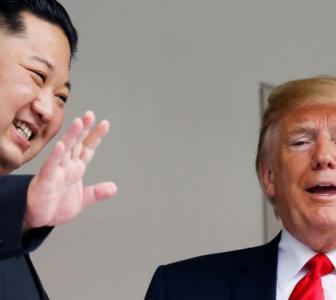 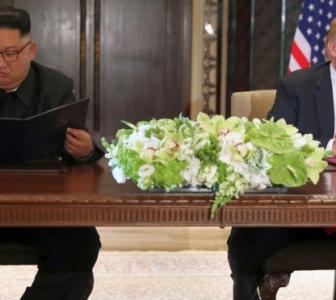 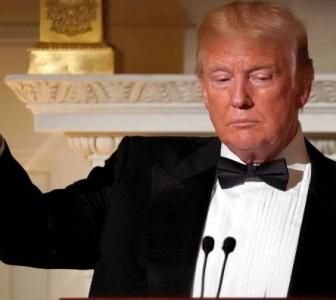 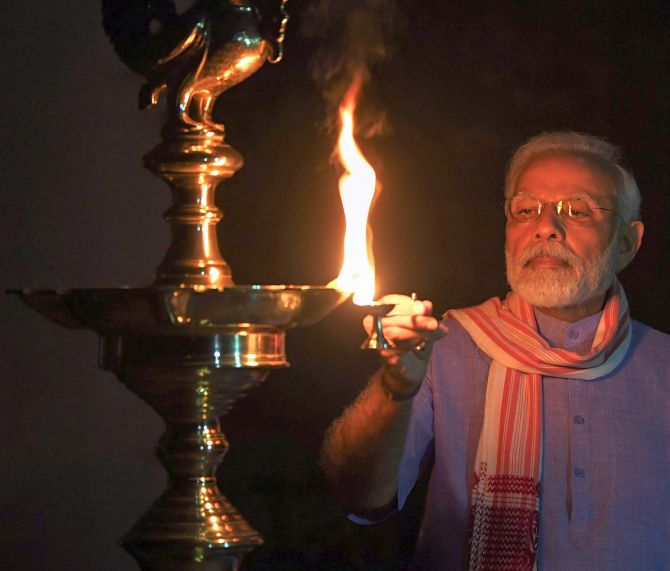 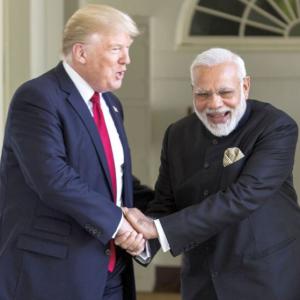 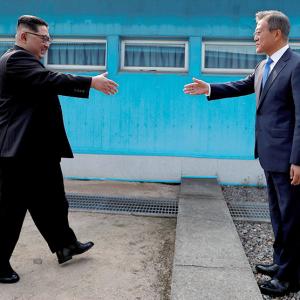