News
Business
Movies
Sports
Cricket
Get Ahead
Money Tips
Shopping
Sign in  |  Create a Rediffmail account
Rediff.com  » News » Why I fear for the future of Anna Hazare's movement

The campaign should have started as a demand for total revolution to usher in good governance of which probity in public life as a quintessential element, says Mahesh Vijapurkar.

For many reasons, I have backed Anna Hazare's campaign.

It did not matter that he was accused of attacking the supremacy of Parliament. For me, he was attacking the insouciance of the MPs who think that once they get the vote, the citizen doesn't matter.

It did not matter that they complained the task of drafting the bill was not with the people. I satisfied myself that by asking them to draft a law that was not going to create anarchy but curb corruption, it was in national interest.

It did not matter that the MPs claim breach of privilege at the words and actions of the leading lights of the campaign, in and around the Ramlila maidan. They were only expressing, I thought, what the common man pretty much thought of them. They know it but have always ignored it. This time, it was done in public glare, with television networks multiplying it to a vaster audience across the country.

It did not matter that the political class kept saying odd-ball stuff about the anti-corruption movement, worse stuff than what they had said about the politicians. They failed to realise that at no time was the institution of Parliament was denigrated. They were attacking the people inside Parliament. There was a distinction, I consoled myself.

I was happy that Parliament asked the presiding offices to convey the 'sense of the house' to the standing committee because the people prevailed. Because it was a landmark event where people asserted their role in conducting the affairs of the nation. It can't be left to fat cats alone, and their vested interests.

But I fear for this movement of Anna Hazare.

I fear it is possible that the people have misread the whole scheme. I suspect the people have begun to believe that moment the Lokpal bill comes to be, even a watered-down version of what was the Jan Lokpal, the malaise of corruption would forever end. As if a magic wand was waved.

This could well create a huge disappointment when the common man, who interacts with the state at the level of a police station that he would be respectfully heard without a bribe being asked when he wants to lodge an FIR. When he goes to get his driving licence, a birth certificate, his property registered, pick up his ration for which he pays. He would imagine now that when he goes to the primary health centre or a civic hospital, he would have a doctor attending on him without anything sought under the table. Any many such sundry thing which a common man need to deal with in his day-to-day life.

The impression does prevail that the corruption is out of the republic, all that remains is the hurrah!

It has not been explained that all laws are cumbersome to deal with, that there are lawyers who can add to the delays in securing justice and that the politicians in cahoots with the bureaucracy and contractors -- the latter, sometimes doubling up as politicians of rank -- are all the time hovering to subvert the best laws.

As they converted the CBI into a disreputable organisation, which always acted at the behest of the political parties in power. As they morphed the Enforcement Directorate into a political handmaiden, like they had men not of proven -- at least in one case -- integrity to head the Central Vigilance Commission. Like they set up lok ayukta in most states where they were limp organisations of no consequence, asking retired bureaucrats to its roster, who except in Karnataka did not earn their wages.

Now a Lokpal, which the political class with vested interest kept on the backburner for four decades and more, is expected to sweep the country clean. People also assume that it would do so in quick time; double quick time, in fact.

That is not going to happen and it is one serious lapse of the movement with Anna Hazare at the helm. Perhaps, by asking voters to ensure the corrupt don't get elected, he is expanding the movement's horizon but in the absence of quick resolution of the corruption issue, it risks being seen as a diversion.

It would not be a diversion, but it would be seen as one. The campaign -- and I confess to saying it in hindsight -- should have started as a demand for total revolution to usher in good governance of which probity in public life as a quintessential element. It was an aspect of marketing the campaign.

Retrofitting it would be difficult. Now that there is time between now and the time the parliament adopts a Lokpal law, the movement can pay attention to the larger issue and work out plans. Or else, what has been achieved -- the awe generated of people's might which cowed politicians down -- would be frittered away.

Once the steam is lost, a disappointed people could either fatalistically withdraw into a shell, or take to the streets in their worst form. These have to be avoided.

Mahesh Vijapurkar is a commentator on public affairs. 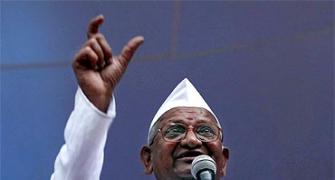 'By jailing Hazare govt looked inept, undemocratic'
When bribery became official in India
Prashant Bhushan tells MPs not to be too sensitive 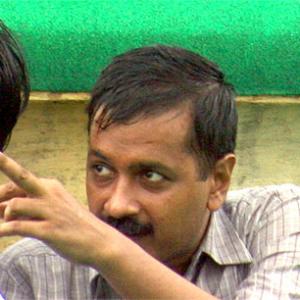 'The people are the masters of the country'