Trump's diatribe against India in his speech on the Paris Agreement is hard to explain, especially when a Modi-Trump meeting is supposedly on the cards, says Ambassador T P Sreenivasan. 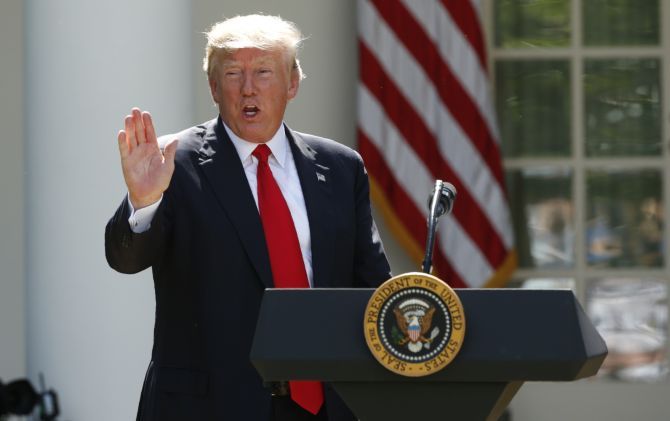 The hue and cry about the US withdrawal from the Paris Agreement on climate change announced by Donald Trump, together with the accompanying hyperbole, has made the Agreement appear like a Magna Carta of developing countries like India and China.

Nations, which were once sceptical and hesitant to sign the Agreement because of its departure from the global consensus in Rio and the Kyoto Protocol have declared their allegiance to the treaty with great vigour.

Trump has actually united the world in support of the Paris Agreement rather than undermine it. But the US today is in the dubious company of Nicaragua and Syria, who have opted out of the Paris consensus.

Rejection of the Paris Agreement on climate change was part of the bewildering array of election promises, which Trump had placed before the electorate.

He had characterised the whole idea of global warming as a hoax, as proclaimed by some scientists, who did not accept the generally held belief that anthropogenic greenhouse gas emissions are responsible for climate change.

He also added that the hoax was perpetrated by China and other developing countries, though he did not name India by name at that time.

Then he began talking about the huge losses to the US economy on account of the reduction in emissions volunteered by the US under the Paris Agreement.

Many had expected that he would eventually back out of the promise under pressure from developed and developing countries.

Even the Pope tried to persuade him not to abandon the Agreement, but he made a dramatic declaration that it was necessary to withdraw from the Agreement to make America great again and to stop other countries from laughing at it.

Nobody had ever suggested that the US was less great on account of Paris or laughed at it.

The main argument Trump used was that the Agreement would permit China and India to continue to burn fossil fuels, while the US would lose fossil fuel related jobs, which would be detrimental to the economy.

He also accused India and China of demanding billions of dollars as compensation for implementing the Paris Agreement.

He deliberately left out the vital point that the reduction of greenhouse gases was purely voluntary and that India and China had also submitted 'Nationally Determined Contributions' to reduce their own emissions.

The 'billions' of dollars promised amounted to only a vague offer of $100 billion after 2020.

The easy way for Trump, if he wanted to undo the Paris Agreement, was to declare that he was exercising his sovereign right to reduce his voluntary commitment to safeguard the vital interests of his country.

He would have been criticised as irresponsible, but not as having isolated the US by walking out of an international consensus, which was considered historic and as having given up the leadership of the world, particularly in developing clean energy.

Why he did not take that option would remain a mystery, except for his penchant for drama and shock treatment for the world.

The height of irony is that Trump has become the villain in the eyes of the developed and developing countries, while Barak Obama, who destroyed the Rio consensus and the Kyoto Protocol in Copenhagen, looks like an angel.

By insisting that the developed countries would not honour their obligations under the Framework Convention on Climate Change unless China, India and Brazil also accepted mandatory cuts on their emissions, Obama changed the whole architecture of environment and development built in Rio in 1992.

The basic principles adopted in Rio like 'common, but differentiated responsibilities', 'per capita emissions' and responsibility for 'incremental costs' were abandoned in Copenhagen and the Kyoto Protocol was buried.

Though India was part of the Copenhagen consensus, together with China, Obama worked secretly with China to shape the Paris Agreement, which was later forced on the other developing countries.

The financial commitment that the US had undertaken was only to change to new energy sources.

In other words, Trump has merely turned to defeat the victory handed to him by Obama.

Trump's diatribe against India in his speech on the Paris Agreement is hard to explain, especially when a Modi-Trump meeting is supposedly on the cards.

The allegation that India was demanding billions to implement the Paris Agreement was patently false, but he might be referring to the discussions between India and the US before India ratified the Agreement.

Speculation was that India linked its ratification to membership of the Nuclear Suppliers Group on the ground that India would be able to reduce greenhouse gases only if its nuclear power capacity was enhanced.

India's ratification of the Agreement was a trophy that Modi gave to Obama at the end of the latter's term.

The international reaction to Trump's declaration was predictable.

The main criticism was that the US was renouncing its leadership of the world, but Trump made it clear that he was more concerned about the growth of jobs in the US.

He has offered to enter into negotiations for a new agreement, but nobody is buying that for the moment.

Inevitably, however, there would be fresh negotiations because, without the participation of the US, the climate change agenda cannot be moved forward.

Significantly, the White House spokesman evaded a question whether Trump still believed that climate change was a hoax, leaving the possibility for future negotiations.

Although Trump's declaration has prompted universal condemnation, its real impact on the world and climate change may not be real.

The voluntary 'contributions' indicated to the UN will not suffice to stabilise average temperature to well below 2 degrees Celsius above pre-industrial levels.

The mechanism for a review of the 'contributions' every five years had held out some hopes.

Perhaps, the opportunity for negotiating the entire Paris Agreement may well be a blessing in disguise.

IMAGE: US President Donald Trump announces his decision that the United States will withdraw from the Paris Climate Agreement, June 1. Photograph: Kevin Lamarque/Reuters 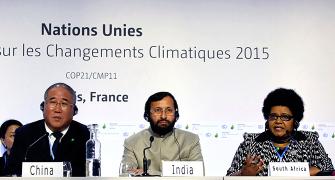 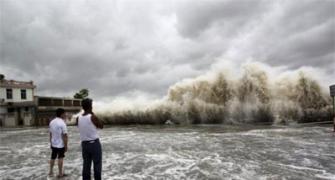 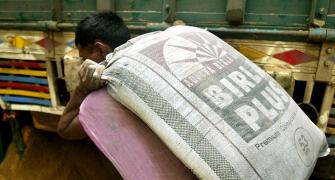 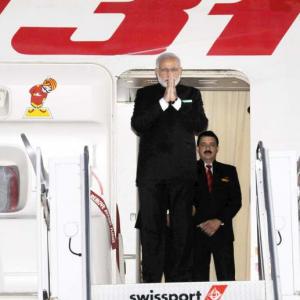 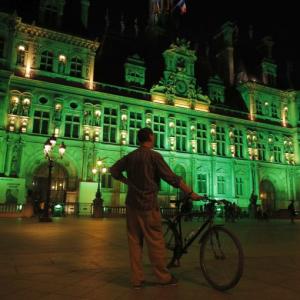 PHOTO: World goes green in solidarity with Paris climate accord