News
Business
Movies
Sports
Cricket
Get Ahead
Money Tips
Shopping
Sign in  |  Create a Rediffmail account
Rediff.com  » News » Who Got the Bofors Money?

Who Got the Bofors Money?

The Congress kept sheltering Quattrochi, and the BJP was more intent on shielding the Hinduja brothers.
The fact is that the two roads crisscrossed, and neither the truth prevailed nor did the law take its course, says Mohan Guruswamy. 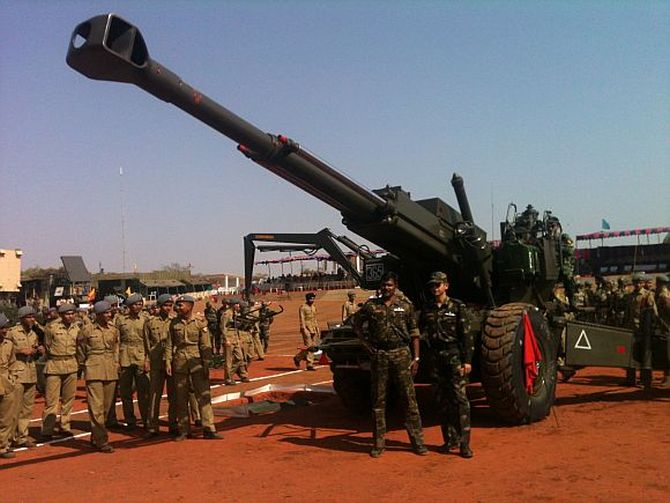 In 1987 soon after the Bofors story broke out, the late Ramnath Goenka persuaded me to visit Sweden to ferret out what exactly took place there.

I contacted Magnus Akerlund, a producer in Radio Sweden, which first broke the story.

Magnus invited me to visit Stockholm to talk to the reporters covering the story.

Radio Sweden had by then quite effectively nailed the Swedish Social Democratic Party of Olaf Palme as the main beneficiary of a bunch of pay-offs made by Bofors.

It was also clear that some money was paid to Indian parties.

One clearly was Win Chaddha, who for over a decade was the Bofors representative in New Delhi.

Another party was the Hinduja brothers.

But the last one was very interesting. It led to Austria.

I then proceeded to Linz in Austria to meet a man called Gan Eisenberger who had recently been fired as the marketing director of Noricum, the howitzer manufacturing arm of the giant Austrian government owned engineering company Voest Alpine, after an Austrian parliamentary committee found him guilty of flouting Austria's neutrality laws.

This committee also found some money missing in the accounts pertaining to this division.

In the late 1970s Voest Alpine purchased the design for a relatively light and rugged 155 mm howitzer from Gerald Bull, a Canadian weapons designer.

Bull had designed field guns for NATO, but was soon driven out of business by US arms manufacturers.

So he ended up selling designs and ideas to Saddam Hussein, then fighting a war with Iran.

Saddam liked the planned 155 mm howitzer and a deal was struck for Voest Alpine to make them.

The conservative party led by Kurt Waldheim, which was quite sympathetic to Iraq also, then governed Austria. (Waldheim was uncovered by the Jewish Documentation Centre of Simon Wiesenthal to be a former Nazi and driven out of office.)

But before the conservatives went, 160 numbers of the Gerald Bull designed howitzers, the Noricum GHN45 were manufactured and assembled for shipment to Iraq.

(Gerald Bull was killed by Mossad in Brussels in March 1990 as he had begun redesigning Scud missiles for Iraq to make them more accurate and nuclear capable. He was also putting together a supergun that could lob shells from deep within Iraq into Israel).

But the Iraqi plan came to naught when Bruno Kreisky became the Austrian chancellor.

Kreisky came from a prominent Vienna Jewish family and promptly scrapped the deal as it violated Austria's neutrality laws.

Kreisky was also a personal friend of Prime Minister Indira Gandhi and was instrumental in making the Congress party a member of the Socialist International during the Emergency, much to the chagrin of George Fernandes's German SDP friends.

Chancellor Kreisky persuaded Indira Gandhi to take those 160 guns readied for the Iraqis to help him out.

The GHN45 howitzers were indeed very good and with base bleed shells had the longest reach of all howitzers available then.

They were accurate, rugged and easy to maintain.

They came out best in all the trials against more expensive guns.

India would have benefitted greatly by entering into this deal as the Austrian government had also proposed to transfer the manufacturing technology and operations to India.

They just wanted to be rid of the arms business, given the embarrassment it caused to the country.

Like in all such deals a small something was also to be made to the Congress party's war chest.

In 1983 this money was also made over in advance, in anticipation of the formal order.

Mrs Indira Gandhi often made leader-to-leader deals of this kind.

In 1970 she bought the Sukhoi7 fighter-bomber on Leonid Brezhnev's say so.

In 1984 Indira Gandhi was assassinated and a new chapter began.

Olaf Palme too had an Indian connection.

His aunt Anna Palme was the father of Rajni Palme Dutt, at one time general secretary of the Communist party of Great Britain, and a good friend of Indira Gandhi and Jyoti Basu during their UK days.

Olaf Palme was a big and respected name in world affairs and had strenuously opposed the US war on Vietnam.

He inspired Rajiv Gandhi to take the initiative on nuclear disarmament.

The quid pro quo for facilitating Rajiv Gandhi's easy entry to the global high table was the purchase of the Bofors FH45 howitzer.

Palme was also facing a re-election and his party's coffers needed topping up.

The Indian howitzer order would do the trick.

The donation by the Bofors Foundation at Karlskrona to the Swedish SDP is proof of this.

This made the Austrians furious.

Eisenberger told the parliamentary committee that the funds they wanted accounted for were paid to the Congress party and that a kinsman of the Indian prime minister had received them.

This was the first time the new Indian prime minister heard about it.

A very powerful minister in his government was summarily sacked.

Now a way was sought to set this account right.

Bofors was required to close this hole.

This was being arranged via a Swiss banker Francis Laffont.

Laffont pays Voest Alpine and the money already paid in India stays where it is.

In all probability it was used up in the 1984 elections.

As was the well-established practice then, Unterweger also cut a deal with Quattrochi.

What Unterweger did not know was that Quattrochi had similar deals cut with Bofors and Sofma, the French howitzer manufacturer.

When the Voest Alpine deal collapsed, Quattrochi was required to close that account, as did the Congress party.

So one more pay off stream was organised by Bofors to Quattrochi to close this hole.

The Quattrochi method of cutting deals with all competing suppliers is a common practice in India now.

The best-suited item is chosen and it still keeps the Indian system and some palms greased.

But more than that it is a way of getting money out of foreign companies for their own executives.

Often more money goes to the foreigners than to the Indians.

The Hinduja brothers take this to the next level.

People like the Hindujas have friends in all parties and many countries.

Lest we forget, it was Atal Bihari Vajpayee who wrote to then prime minister P V Narasimha Rao seeking closure of the Bofors case against the Hinduja brothers.

And it was Srichand Hinduja who accompanied Brajesh Mishra to his meetings with then British PM Tony Blair and then French PM Jacques Chirac after the nuclear tests in 1998.

Vajpayee and Mishra were actively canvassing for approval of the controversial proposed Hinduja power plant at Vizagapatam.

The Russians have now become canny and have their own special Indian flunky to do the bribing and manage their share of the take as well.

When I came back with my story, Goenka was not too happy with it.

The person who knew most was sitting next to him (and V P Singh) plotting taking Rajiv Gandhi down.

After the conspiracy with Zail Singh lapsed, Bofors became the stick to beat Rajiv Gandhi with.

And Arun Shourie was his ever-willing henchman.

He had replaced his brother-in-law Suman Dubey as the editor of the Indian Express.

But Goenka was happy that I had linked up the connection with Quattrochi.

From Quattrochi to Sonia Gandhi was an inference.

The subsequent behaviour of successive governments did indicate that while there is something to hide, they were not in agreement on what to hide.

The Congress kept sheltering Quattrochi, and the BJP was more intent on shielding the Hinduja brothers.

The fact is that the two roads crisscrossed, and neither the truth prevailed nor did the law take its course.