News
Business
Movies
Sports
Cricket
Get Ahead
Money Tips
Shopping
Sign in  |  Create a Rediffmail account
Rediff.com  » News » Have you told your son about rape?

Following the sensational GS Road molestation case in Assam last year, blogger Local Tea Party wrote a blog post about what to tell your son on rape. Given its relevance against the backdrop of the recent Delhi gangrape case, we reproduce the post

Tell your son to go out with the girls. Tell him to give them hugs and high-fives and ask them to go out on day trips and have fun. Tell him that it is not important to get married before having sex and that if he feels like it, ask him to use that condom you just gave him. Tell him that the Health and Glow shop anyway has lots of varieties of them near the cash counter itself and that he need not be embarrassed to go buy them if he has to. No one will notice.

Tell him that he can talk about sex in your presence. And that you will not feel embarrassed about it.

Tell your son that it is okay to watch pornography. Don't ask him to watch it when you are around and all, that will be indecent, but still tell him that there is nothing wrong in watching two adults in action.

Ask him to log on to Chatrooms and have sex chat with a random girl on the other end. It could be a guy pretending to be a girl, but still that and all doesn't matter. Ask him to have it nevertheless.

Ask him to do sexting with this girlfriend, but tell him to do it discreetly. Tell him it is ok to have phone sex with her and that even if you overhear something from his room, tell him that you will pretend you have not heard anything. Promise him you won't embarrass him.

Tell him to relax and enjoy sex.

But before you do ANY of the above,

Tell him that real life pornography requires her permission. Tell him that if a woman agrees, no amount of erotica can match a woman's passion. But ask him to wait for the woman to agree first.

Tell him that a woman is a human being. Just like him. Not a piece of object. Tell him that while it is ok to admire her beauty, grabbing her body parts without her permission is worse than stealing food from rabies-ridden street dog. Tell him that just because he possesses a penis, it does not give him the right to mate with every vagina in the vicinity automatically.

Tell him that even broken hearts can be mended but he cannot break a woman's dignity at any cost.

Tell him that raping is a sin for which man will have to pay a heavy price. A very heavy price. 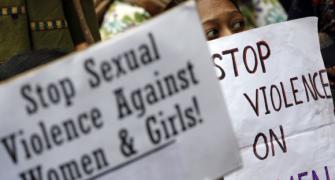 Ten things I hate about YOU

Why no law against rape will work
What drives the Indian male to rape?

What is chemical castration? Will it STOP rape?