News
Business
Movies
Sports
Cricket
Get Ahead
Money Tips
Shopping
Sign in  |  Create a Rediffmail account
Rediff.com  » News » What can India achieve at the SCO?

'Lingering border disputes and fierce geostrategic competition in South Asia between China and India are likely to temper any cooperation Beijing might hope to achieve with New Delhi in the SCO,' says P K Vasudeva. 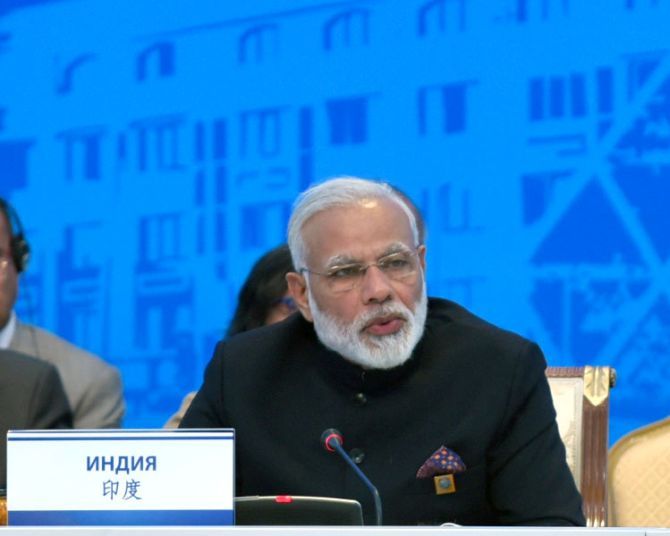 The Shanghai Cooperation Organisation is a Eurasian political, economic, and security organisation, the creation of which was announced on June 15, 2001 in Shanghai, China by the Shanghai Five group —-- comprising China, Kazakhstan, Kyrgyzstan, Russia and Tajikistan -- that was founded in April 26, 1996.

The SCO decided in Ufa, Russia, to admit India and Pakistan as full members.

Both signed the memorandum of obligations in June 2016 in Tashkent, Uzbekistan, thereby starting the formal process of joining the SCO as full members.

On June 9, 2017, at a summit in Astana, Kazakhstan, India and Pakistan officially joined the SCO as full-fledged members.

Membership of the SCO could bring India and Pakistan closer despite the Jammu and Kashmir dispute, rising geopolitical competition between the two Asian giants and their differing approaches to counter-terrorism, because of the healthy environment of give and take at the SCO.

According to Derek Grossman, senior defence analyst at the non-profit, non-partisan Rand Corporation of the United States, Beijing may not have even wanted India to join the SCO.

Russia first proposed India as a member to complement bilateral economic and security, mainly to contain China's growing influence in the organisation.

As China gains more clout in Central Asia, Moscow welcomed New Delhi by its side to occasionally strengthen Russia's hand at slowing or opposing Chinese initiatives.

Prime Minister Narendra D Modi's informal summit with Russian President Vladimir Putin in Sochi, Russia, on May 21 is part of the regular consultation between the two leaders with the objective of further strengthening the special strategic partnership.

Going forward, this strategy is likely to pay rich dividends.

New Delhi has a major problem with the activities of Pakistan -- sponsored by Beijing at the 2015 SCO summit to balance Moscow's support to India -- and continues to be highly critical of China's all-weather friendship with Islamabad.

New Delhi refused to send a delegation to Beijing's widely-publicised Belt and Road Initiative summit in May 2017, which was aimed at increasing trade and infrastructure connectivity between China and Eurasian countries, as the China-Pakistan Economic Corridor was not 'pursued in a manner that respects sovereignty and territorial integrity' -- it passes through Pakistan occupied Kashmir to link up with the strategically positioned Pakistani port of Gwadar.

Beijing can play a balancing act to bring sobriety between India and Pakistan by supporting the genuine demands of India on terrorism and counseling India on J&K for peaceful negotiations.

Another major issue for the SCO to contend with is the security of Afghanistan.

An integral component of the organisation is the Regional Anti-Terrorist Structure, aimed at combating China's 'three evils' -- terrorism, extremism, and separatism.

India, however, is likely to reasonably highlight the contradiction between China's stated anti-terrorism goals and the reality of its policy.

Most notably, Beijing has consistently looked the other way as Pakistani intelligence services continue to support terrorist groups in Afghanistan, including the Afghan Taliban and the Haqqani Network.

Moreover, India, being close to Afghanistan, could seek to sponsor Afghanistan to move from observer status toward full SCO membership.

This would give India greater strength in the group and could bolster Russia’s position as well.

Lingering border disputes and fierce geostrategic competition in South Asia between China and India are likely to temper any cooperation Beijing might hope to achieve with New Delhi in the SCO.

On the one hand, mutual suspicions in the maritime domain persist, with the Indian government recently shoring up its position in the strategically important Andaman and Nicobar Island chain to counter the perceived Chinese 'string of pearls' strategy aimed at establishing access to naval ports throughout the Indian Ocean that could be militarily advantageous in a conflict.

On the other hand, China has naval bases in the making -- Gwadar in Pakistan, Hambantota in Sri Lanka, Chittagong in Bangladesh, Kyauskpyu in Myanmar and Gan in Maldives -- for dominating the Indian Ocean.

Although India may be an unwelcome addition and an irritant to Beijing at the SCO, China does not necessarily need the SCO to achieve its regional objectives.

Even though India rejected Beijing's BRI overture, China remains India's top trading partner and a critical market for all Central and South Asian States, leaving them with few other attractive options.

Regardless of any bickering that may break out between countries, Beijing is expected to signal the importance of the SCO through considerable pomp and show at its summit this month.

China as the host can emerge as a peacemaker in the continent if it handles the summit tactfully by accepting members' genuine viewpoints and justified demands amicably.

P K Vasudeva is a retired professor of international trade. 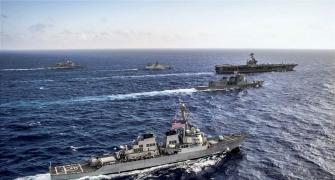 How Malabar 2018 will benefit Indian Navy