'Now with many itchy-fingered ex-bosses being raked through the mud, their marriages ruined, their careers trashed, their finances hit, the inclination of many male hiring managers will be to hire fewer women,' believes Rajeev Srinivasan. 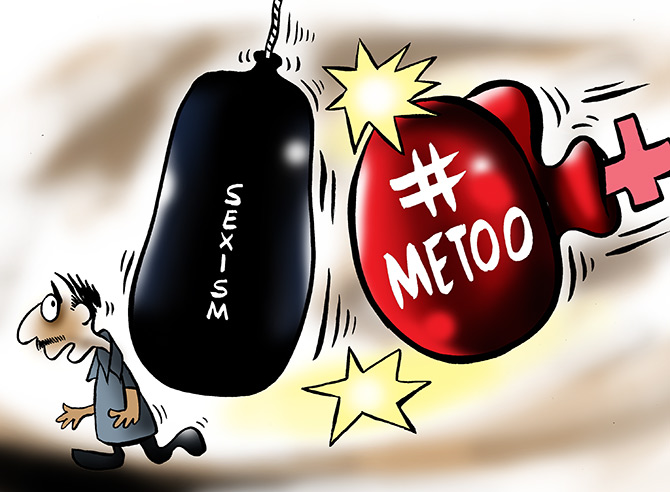 A virtual tsunami of accusations of sexual impropriety has come out in the US in the wake of the outing of Harvey Weinstein, a famous Hollywood producer and alleged serial sexual predator.

Every day yet another stalwart of industry or media or politics loses his job because of accusations about long-concealed acts.

Apparently, many women have been emboldened to come out with bitter tales of rape and molestation because they feel they will be taken seriously now, and also possibly because the man will suffer.

There is also, in parallel, the furore over the film Padmavati in India.

There is bitter irony in that many who unquestioningly support the American women are on the opposite with Rani Padmini: They ask whether she should have chosen suicide over the certainty of sex slavery, continuous gang-rape, and humiliation.

If you believe in the dignity of the individual and in freedom of choice you have to believe that a woman is entitled to choose about her own body.

Sadly, but not surprisingly, India's leftists have demonstrated that they, with their #MeToo hashtags, support the American woman of today, but do not grant the same right to the 13th-century Indian Rani.

I don't wish to equate the two instances, just to point out the wretched double standards of the dog-whistle virtue-signalers.

Of course, instances of men taking advantage of (often younger) women over whom they have power are legion in today's India as well as in the US.

Examples include the infamous Tarun Tejpal 'fingertips' episode, the story of unwanted attentions from Rajendra Pachauri as well as the many extra-curricular activities of Jawaharlal Nehru.

There have also been for years revelations of religious figures (especially from the church, as in #ChurchToo, but not only) involved in sexual harassment of women, as well as pedophilia.

There's also the remarkable case of Kerala movie star Dileep who allegedly issued a multi-crore rupee 'quotation' to have a young woman star sexually assaulted and video-taped, in an attempt to destroy her career and ruin her impending marriage, in revenge for her having revealed to his then wife that he was having an affair with his then girlfriend, now-wife.

Tales of men forcing their attentions on women are not uncommon in ithihasa either, although often said women managed to extract certain promises: See matysagandhi Satyavati and Shantanu.

In the Christian Bible, we have the aged King David 'ministered to' (whatever that means) by the young Abishag the Shunammite.

The work of sociobiologists like E O Wilson suggest that it is normal for males to want to spread their genes by impregnating as many women as possible, thus giving a pseudo-scientific justification to the ancient art of seduction, by force if need be.

There is also a related meme about the art produced by men. Claire Dederer wrote 'What Do We Do with the Art of Monstrous Men?' (external link)) in the Paris Review which suggests that men who are rapists and otherwise monsters to women should be ignored.

Dederer launches into a long discussion on Polanski who raped a 13-year-old girl, but produced masterpieces like Rosemary's Baby and Chinatown.

But her ire is even more pointed towards Woody Allen, whom she calls the ur-monster, for sleeping with teenaged Soon-Yi, the adopted daughter of his partner Mia Farrow; and for the film Manhattan where his middle-aged character sleeps with the 17-year-old Mariel Hemingway. I can see her point: How could he?

But I couldn't agree with the idea that because a man is a creep, his writing or his art should be boycotted.

It is not that some of these great artists are monsters only to women; they are monsters to everybody, including their children and parents and everyone else they encounter.

It's not just artists, either, it is leaders, sportsmen, businessmen too: An alarming number of famous men. And incidentally, some women too.

It would be a little counter-productive, in a sort of American overkill political correctness -- those precious snowflakes who need 'safe spaces' on campus -- to boycott them all.

I also felt a little protective about Naipaul partly because I consider him one of the greatest writers in English in the last few decades. So far as I know, he was a needy and obnoxious husband to his first wife, but his current (incidentally Pakistani) wife seems reasonably content, so why he is lumped with rapists is not clear (although I don't how monstrous many in Dederer's list are, or indeed, who they are).

However, all things considered, the outing of these sexual predators has one ironic unintended consequence: It is mostly lefties who have been caught doing all the raping and groping and exhibitionism.

Just look at the men who have been fired or lost their jobs: So far as I can tell, the vast majority of them are the odious types who piss off other men by being oily, unctuous 'feminists'. Now we know they are also hypocrites.

For instance, Weinstein himself was seen as some uber-leftie Hollywood bleeding-heart for all the right feminist causes while harassing all those women.

Or take a look at the list of 70-odd sex-abusers that Raya Sarkar, a young lawyer, crowdsourced from Indian women. Almost all, to a man, lefties.

There are also some darker, unforeseen consequences: Blowback to the current outrage may get women turned away from jobs.

Earlier, when the Indian government in its wisdom imposed a mandatory 6-month paid maternity leave provision, that also gave businesses a reason to not hire women.

Now with many itchy-fingered ex-bosses being raked through the mud, their marriages ruined, their careers trashed, their finances hit, the inclination of many male hiring managers will be to hire fewer women.

Let me hasten to clarify that I am not saying therefore that sexual predators should not have been identified and punished: They should have been, and they should be.

It's simply easier for a male boss to say, 'Why bother with hiring women, and invite trouble'? Easier to deal with only men.

There might even be genuine office romances which go sour, and one party or the other may wreak vengeance. A vengeful woman may make accusations of rape, when sex was in fact consensual; there was a wave of this sort of accusation, if I remember right, in Rajasthan.

Draconian laws concocted by #SJW mean that the man is jailed immediately merely on the woman's word. It's like the 498b law about dowry that are used by wrathful, wily, women to jail innocent husbands and in-laws.

I repeat, none of this is to gainsay that real crimes take place. But we need to think: Why are those most loudly proclaim their feminism and leftist sympathies for the subaltern also the most likely sexual predators?

And this whole situation should not be become a witch-hunt in which the shrill and the militant hijack the genuine anger.

For, both men and women will be losers. 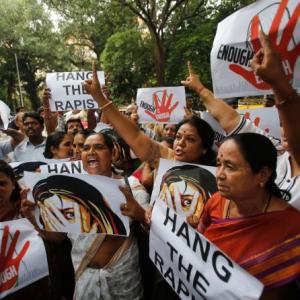