Warning: Security perils for India on road ahead

The apparent Indian smugness and inability to see the gathering clouds on the security horizon is at the heart of our problems, warns Colonel Anil Athale (retd).

As India approaches the end of the 60th year as a republic, bad news seems to be coming in an avalanche.

The neighbourhood is in turmoil as even the President and prime minister of our western neighbour seek 'foreign' bodyguards. If ever there was a sign that radical forces like the Taliban are about to come to power there, this is it. With Wikileaks threatening to reveal the names of Swiss bank account holders, there is panic in the political class. Thus the external and internal crisis seem to be coming together to create a crisis that may well endanger the existence of our country.

The Indian nation is likely to be in peril in the coming decade. Will India survive this turbulence unscathed? With all my patriotic instincts in tact, the unfortunate answer to this loaded question is may be!

Readers bombarded with the recent endorsement of 'Brand India' by the high and mighty nations of the world, with President Barack Obama declaring that India has already emerged as a superpower, may wonder and even question the author's sanity.

This apparent Indian smugness and inability to see the gathering clouds on the security horizon, is at the heart of the dire prediction about India. But to uncover the looming danger to the nation's security in the coming decade, a brief look at the decade that is about to end is necessary. For the seeds of our possible misfortune lie in the events and policies of the past ten years.

India has long cherished a myth that there is something 'special' in Indian civilisation that has ensured that it has survived. Mohammed Iqbal, the poet, gave expression to this by saying that there is something special in us that guarantees our existence as a nation. Realistically speaking, the 7,000-year-old Indian civilisation owes its continued existence to accidents of history.

A navigational error led Columbus to America and Europeans hordes destroyed Red Indians instead of brown Indians. In the middle ages rulers like Aurangzeb embarked on a sincere mission to destroy Indian civilisation but the limitations of technology of killing (no machine guns and no nuclear weapons thwarted his ambition and Chhatrapati Shivaji led the Marathas in a un-Indian like resistance). Today the 'intent' of our adversaries remains the same and modern technology has given them the tools to achieve it.

The closing decade can well be called a dismal decade as far security is concerned. The attack on Parliament in 2001, co-ordinated bomb blasts in Delhi/Jaipur/Ahmedabad/Varanasi and two horrific attacks on Mumbai (the 2006 train blasts and 2008 armed attack on the metropolis), all had direct or indirect connection to Pakistan.

In 2001 in response to the attack on Parliament, India mobilised its armed forces and threatened all out war, but retreated. In case of the Mumbai attack of 2008, again we took no action. The lack of action in 2008 was all the more surprising as since 2001 India has been working on an appropriate response for precisely such an event.

The obvious conclusion is that we lack the necessary military superiority to carry out our threats. Even more worrying, leaks emerged that Pakistan is engaged in furiously increasing its nuclear arsenal -- at a pace fastest ever in world history.

To counter this we seem to be at a loss. The closing year saw multiple failures of the Agni missile tests. Even our space programme (of dual use) also had a string of failures. With loss of satellites to monitor our adversaries we will be at a distinct disadvantage. The sum of it all is that Pakistan has a distinct impression that it has overtaken us in nuclear and missile fields. There is an ever present danger that this would encourage adventurism.

Indian emphasis right from independence has been on economic development and minimal expenditure on security. But in the last six years of the United Progressive Alliance rule the obsession with GDP growth has been marked with neglect of defence.

Defence and development are like two legs, if one remains too far back the person/nation falls. But even more worrisome is the directionless-ness that one witnessed in the near fiasco of the Commonwealth Games! Here was an international event in which the nation had invested its prestige, yet the government only woke up when the foreign media highlighted the shoddy preparations.

In a typical knee-jerk reaction, last minute efforts were made to rectify the situation with the prime minister, no less, inspecting the Games Village! Is this also trend in our defence preparedness? The memories of how a bunch of ten desperados held Mumbai to ransom for 60 hours are still fresh.

Some months ago a leading national newspaper reported that the top bureaucrats (home, foreign and cabinet secretary), three service chiefs and directors of IB and RAW have decided to meet over lunch every month to informally sort out the inter-departmental issues. This ought to have caused a huge embarrassment and a public furore. It obviously means that the Prime Minister's Office whose job this is; is not functioning.

We have been lucky so far that the terrorists have targeted mainly humans. What if the terrorists were to change their strategy and attack dams, industrial, chemical or nuclear establishments? Do we still sit back and 'investigate' the crime and then go to the superpowers with our complaint. This is something that may well happen in the coming year.

It is well neigh impossible to protect every dam, refinery, chemical plant or other industrial centres, many of them in the private sector. If the terrorists decide to adopt this strategy, they will cause much more damage in terms of lives as well as economic costs.

The year 2011 is likely to see great turmoil in South Asia. The impending American withdrawal from Afghanistan, heightened Taliban activity in Pakistan, uncertainty in Iran, tensions on the Korean peninsula!

The next two years are likely to see China jockeying for power in wake of American withdrawal from Afghanistan. It is already making its ground by claiming Arunachal Pradesh and upping the ante on Kashmir. It should be clear to India by now that what we face from Pakistan is in reality a Chinese proxy threat. Are we ready to counter this?

It must be acknowledged that many of us, including this author have been wrong in predicting the demise of Pakistan. The negativity in Pakistan is so strong that it will continue to survive. It is India that is unprepared that is in danger of major setback. Add to this the efforts of politicians to deepen the fissures (classic divide and rule), a coherent national response to threat is missing.

On 1962 Sino-Indian border clash, there was one very intriguing question -- why did the Chinese attack in October 1962? After all the tensions had been brewing since 1959, but why 1962? Even a detailed study of the (still top secret) Henderson Brooks Report (external link) gave no clue.

Militarily starting a war in October made no sense -- in less than one month the Himalayan passes were to close due to snow -- exposing the troops to grave danger of being cutoff from logistic bases in Tibet. What is it that triggered the war at that moment? This author helped establish a clear link between the Cuban Missile Crisis of 1962 and the Chinese attack. Sample this: On September 19, 1962, the first rumblings of Cuban crisis and China attacks Dhola post. October 20, 1962: US orders naval blockade of Cuba and China launches attack on India. November 20, 1962 Cuban missile crisis is over after the Soviet Union agrees to withdraw missiles and the Chinese declare a unilateral ceasefire on November 21 and halt their advance. Are we looking at 1962 like situation again?

The greatest worry is however that larger public and leadership is unaware of the looming danger. You could clean the Games Village at the last minute, but how are we going to rustle up the required military strength when already under attack.

The nightmare scenario when brand new 7.62 self loading rifles in crates were dropped for the soldiers at Dirang Zong (Arunachal Pradesh) on November 14 in 1962 when the Chinese were a few kilometres away comes to mind. Have we learnt nothing from 1962?

Colonel Anil Athale (retd) is co-ordinator of Initiative for Peace, Arms-control & Disarmament, former head of War Studies Division of the Ministry of Defence and Shivaji Fellow of the United Services Institution. 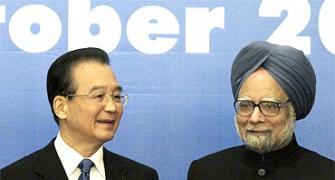 Amid China fears, Bhutan stands out