'Modi's abject capitulation will play out badly in his core constituency.'
'The bulk of our strategic community is under the impression that India under Modi has already become a superpower.'
'They don't even want to look at the country's emaciated limbs or its asthmatic problems,' says Ambassador M K Bhadrakumar. We are living in extraordinary times when every word uttered by the leadership must be carefully studied.

No Indian government since Independence made a fine art of manipulating public opinion.

Thus, Prime Minister Narendra Modi's warning that more measures against black money can be expected after December gives a new twist to the tornado of 'demonetisation' sweeping the country.

Will Modi now put aside all pretence and specifically target the political class, who is, arguably, one of the single biggest beneficiaries of 'black money'?

It is a proven fact that only politicians keep black money in cash in such bulk.

The middle class and the corporate guys put away black money in Bahamas or Canary Islands, and in benami holdings or through the stockmarket.

In the normal course, the months of January and February would have presented a carnival of black money when Uttar Pradesh goes to the polls.

Now, what if the tornado triggered by Modi reaches the doorsteps of Mayawati or Mulayam Singh Yadav by then?

Modi says he is the ultimate truth digger who will go right back to Independence. The Congress party, too, must worry.

Conceivably, the BJP is the only major party in the upcoming UP election that wouldn't have to look over the shoulder to lavishly fund its campaign.

On the other hand, just as development agenda was Modi's main plank in the 2014 poll, he will find it expedient to make a new cocktail mix of 'surgical strikes' in Uttar Pradesh.

Beware the Ides of March!

Therefore, when Modi or his senior colleagues say something, weigh it carefully. Why they said something is invariably more important than what they said.

Alas, the Communist Party of India-Marxist and my good old friend Manoj Joshi failed to observe this golden rule. They rushed into judgment upon hearing that Defence Minister Manohar Parrikar said India's 'No First-Use' nuclear policy makes no sense to him.

The CPI-M Politburo said, 'This (Parrikar's remark) has serious implications both for India's security concerns and for India's standing in international relations. This statement represents a complete reversal of the long standing position of India as a country that champions a nuclear weapon free world and consistently stood by its commitment for peaceful use of nuclear energy.'

'The defence minister's statement clearly indicates that this government is negating India's established stand on use of nuclear weapons in war. It jeopardises India's security concerns by undermining the declared good neighbourly relations approach. Further it undermines India's efforts for membership of international bodies like the UN Security Council and the Nuclear Suppliers Group.'

Both CPI-M and Manoj could have held their breath. After all, Parrikar, although the butt of jokes among the fauji community, is a politician too, who has run a state government, who knows the art of spin.

An investigative journalist on the foreign affairs beat, an increasingly rare breed in Indian media, may have just thrown light on why Parrikar deliberately made a patently irresponsible remark.

Shubhajit Roy of the Indian Express, who travelled to Kobe -- disregarding Modi's nyet to people of his profession accompanying him -- has unearthed (external link) that the much-vaunted India-Japan nuclear deal, which was supposed to be the icing on the cake of Modi's Japan visit, had an important sub-text to it, and that this could be one of those startling moments in international diplomacy when the sub-text dominated the main text.

Of course, the government nicely hid the sub-text from public view, because it shows Modi in unflattering light as having negotiated the nuclear deal on Japan's terms, finally.

No doubt, Modi bent delightfully low, as that iconic British soccer star David Beckham used to do in his halcyon days, to get his way to the goal post. (And, to my mind, he did future generations a great favour by tying down all future governments in India to the commitment not to test nuclear weapons except at the cost of an unaffordable price.)

However, Modi's abject capitulation will play out badly in his 'core constituency.'

The bulk of our strategic community is under the impression that India under Modi has already become a superpower. They don't even want to look at the country's emaciated limbs or its asthmatic problems. With the dexterity of a soccer player with Salgaokar, he kicked the nuclear ball soaring high in an altogether different direction that only highlights that Modi is made of stern stuff.

Who cares about esoteric issue of nuclear tests, when Modi threatens to actually use nuclear bombs upfront against Pakistan and China, which the two cowardly Indian prime ministers before him -- Atal Bihari Vajpayee and Manmohan Singh -- didn't have the guts to contemplate?

To be sure, Parrikar resorted to trademark BJP-Modi bravado. As for the CPI-M, succinctly put, it too should develop an inquisitive mind like Mamta Bannerjee's to figure out the meaning of the black money raids.

After all, Modi is the Salvador Dali of Indian politics. 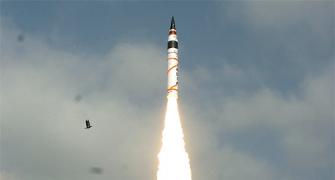 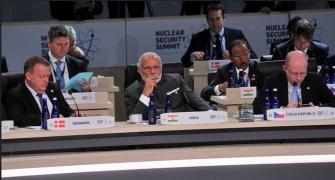