Why Ashis Nandy was wrong!

If Professor Nandy was analysing our mentality to digest specific forms of corruption based on caste, why did he leave out other criteria like religion, region, sub-region, sub-caste and language, asks senior NDTV journalist Ravish Kumar.

India's political class represents different aspirations of castes, religions and regions, but can the rampant corruption in our nation also be differentiated on these bases?

It is this distinction made by Ashis Nandy -- whom I consider one of the finest and most challenging professors of our time -- that I find difficult to accept.

Corruption is a by-product of the fact the India was politically dominated by a single party for many decades after its Independence. Since the Congress was India's first ruling party, this is where you will find the seeds of the all-pervasive corruption in our nation -- if you are doing research on the roots of corruption in India, that is.

It is also clear the anti-corruption movement led by Jayaprakash Narayan in the 1970s had to be anti-Congress in nature.

Corruption is all pervasive today. The anti-corruption movement has targeted both the ruling United Progressive Alliance at the Centre and the Opposition, the Bharatiya Janata Party. Saare neta chor hain (All politicians are thieves) is the refrain today.

The early seeds of corruption have grown into a huge banyan tree today. It is not right, however, to identify one branch (as, say, Dalit corruption) from another (as, say, Thakur corruption).

If Professor Nandy was indeed analysing our mentality to defend or digest specific forms of corruption based on caste, why did he leave out other criteria such as religion, region, sub-region, sub-caste and language? All of these also provide a fertile ground for corruption.

The truth is, the network of corruption has become so complex that it is difficult to isolate any one dimension of this web.

Irrespective, however, of whether we agree or disagree with his argument, I certainly wish his timing had been different!

He could have said this when former Bihar chief minister Lalu Prasad Yadav cried hoarse saying that, in being accused of corruption, he was basically a victim of caste prejudice.

The truth is a corrupt Yadav could only be replaced 15 years later, when the same other backward classes and Muslims turned to another OBC leader, Nitish Kumar, for better governance.

Professor Nandy has defended former Uttar Pradesh chief minister Mayawati and other OBC leaders and analysed how the upper middle class could not digest their ascent.

But this is not as relevant today as it perhaps would have been at the time when Kanshi Ram, the founder of the Bahujan Samaj Party, complained of lack of support by industrialists. This is why, the BSP claimed, they had to invent the gift scheme on the occasion of Mayawati's birthday.

span style="font-size: 18px;">Professor Nandy's statement has come at a time when the aam aadmi has started thinking of corruption as a systemic problem and not something specific to a particular political party; the ordinary Indian citizen sees all politicians as corrupt.

I am not worried about his statement being misrepresented. It is however, very painful to watch him being labelled anti-Dalit.

Mayawati, and many other OBC leaders, were quick to denounce his statement, though Akhilesh Yadav and Nitish Kumar perhaps missed this opportunity.

Professor Nandy and his defenders must accept the brickbats his statement has generated; unfortunately for him, it was not worded right so people have not understood what he was trying to say.

I am not saddened by the way television has converted his discourse into a spicy byte. These things are not accidental. In the era of 'pulp television', this is the least that can be expected.

As far as television news is concerned, catchy bytes are the demand of the day. Television journalists, in their search for eyeballs, will create 'bytes' out of any boring seminar if it can lead to a provocative debate.

I was attending the discussions where Professor Nandy made his statement. The audience laughed and shook its collective head in disagreement. And that is the ideal way to disagree.

But what does a television journalist do when a leader from Delhi calls within half-an-hour of Professor Nandy's statement, requesting me to have a debate during Prime Time (NDTV India's popular show, anchored by the columnist)? Clearly, the news channels had already started flashing Professor Nandy's quotes.

The leader who spoke to me sounded very agitated. 'How can he brand Dalits, OBCs and tribals as corrupt? Ravishji, kuch kariye (do something),' he requested.

I refused and requested him to not to go by the news flashes on television. 'Please read the transcript of his conversation the JLF (Jaipur Literature Festival),' I told the leader.

When I turned after taking this call, I saw Professor Nandy in the authors lounge. We were all sitting there, under the shadow of grand tree in a compact courtyard in Diggi Palace, enjoying our cup of tea.

It was just a matter of time before some groups arrived at the JLF gate and started shouting slogans, "Jiski soch gandi hai, uska naam Nandy hai (rough translation: A man named Nandy has bad thoughts)"

Ravish Kumar
Related News: Ashis Nandy, NDTV India, OBC, JLF, Congress was India
Print this article
From Indian Express: Call it censorship, not social justice
From The Hindu: No room for nuance in this fragile republic 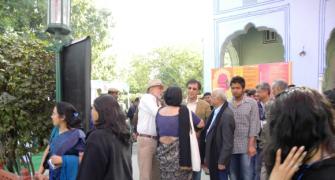