Even as the prime minister's office and the foreign ministry deepen ties with Washington, the defence ministry cold-shoulders the Pentagon, notes Ajai Shukla.

US Deputy Secretary of Defence Ashton Carter's ongoing tour to Japan, Thailand, India and South Korea illustrates Washington's "rebalance toward the Asia-Pacific region" that President Barack Obama first enunciated on January 3. In that momentous policy speech, India alone was mentioned as a strategic partner that had to be courted.

Since then, New Delhi has presented an increasingly ragged spectacle, deterring prospective suitors with strategic foot-dragging, non-governance and a decelerating economy. And so Japan, not India, was Carter's first destination. In Tokyo, Carter hailed Japan as America's "central and anchoring" ally in Asia. "Naturally I come here first, to Tokyo," he proclaimed. Was this just diplomatic hyperbole?

But New Delhi hardly cares! Even as the prime minister's office and large chunks of the foreign ministry deepen ties with Washington, A K Antony's defence ministry systematically cold-shoulders the Pentagon.

Antony has ignored Ashton Carter's appointment as Defence Secretary Leon Panetta's point man on India, charged with cutting through red tape in Washington and New Delhi and facilitating joint development and production. Like Panetta, Antony has a competent deputy, M M Pallam Raju, who could join hands with Carter to channel defence high technology to India.

But Antony, as many know, opposes the US on a dual count: ideology and inertia. His left-of-centre political roots in Kerala predispose him towards a distance from capitalist America. And his personal aversion to decision-making kicks in with double strength when the proposed decision is contested. In this case it involves a strategic relationship with a country that has confronted India during the Cold War, socked us with technology sanctions, and played ball with Pakistan and, hell, China.

But there is also a counter argument, since a defence relationship with the US offers incontestable advantages. These include weaning our military off its crippling reliance on Russia and a dubious dependency on Israel.

Can there be a more equal relationship with Washington? That would involve mastering the US technology control regime, a legislative maze seemingly custom-designed to provide employment to an army of lawyers and bureaucrats in the US capital.

For most of India's strategic elites, navigating their way around these regulations is too cumbersome. And so they prefer to air grievances, castigating America for denying us technology.

A common complaint in India is: "The Americans want to sell us weaponry, but not to part with technology." This is now being challenged by US officials as senior as Leon Panetta and Ashton Carter, who insist that the US is willing to partner India in the joint development of high-tech weaponry. What, then, does it take for Washington and India to become security partners? It is important to understand the mechanics.

All US-India policy discussion on defence technology is conducted through the Joint Technology Group. The Indian side of the JTG consists of the Defence R&D Organisation, or the DRDO. On the US side is the OUD (A,T & L), the cumbersome abbreviation for the office of the undersecretary of defence for acquisitions, technology and logistics.

Unlike the DRDO, whose discussion team consists mainly of scientists, the OUD (A,T & L) brings to the table a formidable combination of managers, lawyers and scientists.

While the JTG handles policy, the DRDO processes any joint R&D proposals with its three counterpart laboratories in the US defence department. But the crucial factor on the US side is funding. An American laboratory can only pursue an R&D proposal if one of the US armed forces is willing to fund the project. In India, the DRDO is pre-allocated funding through the defence budget.

This could also be done on a government-to-government (G2G) basis. If a DRDO laboratory wants to adopt the G2G route for a joint project with a US laboratory to develop state-of-the-art underwater sonar, the proposal would be mooted through the JTG. The JTG would allocate the project to a suitable US agency, which would then have to persuade the US navy to fund their share of the development cost.

This means that the US military must see some practical utility in financially sponsoring joint R&D. With Antony bent on keeping the US military at arm's length, and unwilling to sign even a logistical support agreement for fear of being sucked into America's wars, the American military has little reason to view their Indian counterparts as friends who deserve technological support.

If there is likelihood of early change, it is in the maritime domain where America's "rebalance to the Asia-Pacific" seems likely to boost interaction between the two navies. Meanwhile, Washington has undertaken a major review -- called the Export Control Reform Initiative -- of its export control system. There is consensus that the current system is "confusing, rigid, and controls too many items for the wrong reasons", to quote Ashton Carter. Washington's export control horizon is set to change and India must prepare to benefit from these changes. 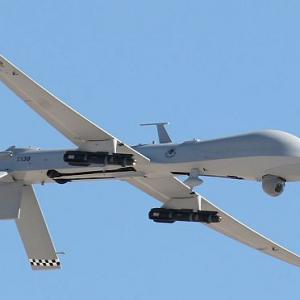 Let us do the dirty job, US drones can watch: Pak offers

'US moves new forces to Persian Gulf to ward off Iran'