'Mental health experts are concerned because when you see so much negativity, even if it is confined to social media, your perceptions change.'
'You begin to feel that the real world is also this way.'
'And the sense of optimism and positivity -- traits that build resilience and wellbeing, both physical and mental -- begins to slip away,' warns Veenu Sandhu.
Illustration: Uttam Ghosh/Rediff.com 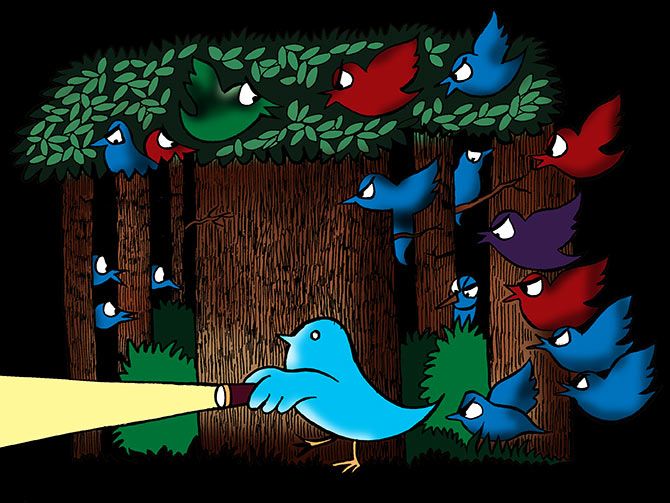 When I was younger and when computers weren't central to our existence, I had never imagined one day I would find myself looking into a world full of hate.

Had someone told me then that this world would exist in a virtual realm but that it would spill into our flesh-and-blood lives, like in a horror film, I would have shuddered. But I would have also brushed it off as imaginary nonsense or fiction.

I remember when we were first introduced to this exciting new creature, how carefully we thought about what we wanted to say to the world. The mental brief was: Say the smartest or funniest or most impactful thing you can in those measly 140 characters.

My first tweet was something about Shah Rukh Khan. How I laboured over the tweet before tentatively posting it.

Thereon, every follower gained was an ego boost, read as acknowledgment and validation from the mysterious world out there.

Who would have thought then that Twitter would evolve into such an angry space?

The first time I found myself the object of attack after a tweet, the shock was as though somebody had physically struck me.

What had I said that had angered some people so much, I wondered. I evaluated my tweet and then reevaluated it. I couldn't understand.

Now wiser, I know that no matter what you post, someone somewhere will find reason to be angry about it.

Have I learnt to ignore it? To some extent.

Have I become used to it? No.

What's more, even if we are not participants but mere observers to the exchanges on Twitter, it still affects us.

It is too early to say how this negativity will impact society at large. But impact it will, and we will find out how in 10 to 20 years.

Will the kind of language and behaviour we see on Twitter become acceptable in physical social spaces? Possibly.

Mental health experts are concerned about this because when you see so much negativity, even if it is confined to social media, your perceptions change.

You begin to feel that the real world is also this way. And the sense of optimism and positivity -- traits that build resilience and wellbeing, both physical and mental -- begins to slip away.

So, course correction is in order.

Like WhatsApp, which has limited the number of forwards and eliminated a good deal of nonsense from the platform, Twitter needs to step up.

That it is targeting and removing bots is a welcome step. It also needs to target fake accounts and demand profile authentication.

But until that happens, it might be wise to self-correct the situation.

I, for one, have stopped engaging with entities that simply lurk mysteriously in that space. I find no reason to. I have no clue who they are. Their profiles are ambiguous.

Are they real people? Or are they bots? Are they who they say they are? What are their motives? Who knows?

And then I have turned to the happy side of Twitter. Believe it or not, there is one.

It exists in the form of Twitter handles that leave me with a smile or with a tinge of nostalgia, or even a little wiser about the world.

Like the one that leaves on my timeline classic and rare pictures from across the globe. And another that is operated by an 82-year-old actor whose smile hasn't shrunk with the years, which is something to say.

He is called the He Man of Indian cinema: Dharmendra. His tweets, which often appear in the form of videos and pictures, are sometimes funny, at times a tad silly, but always endearing.

When I need a Twitter detox, I turn to these handles.

And I am thankful for them, because deny it as we may, we humans need to feel good about the world.

For that to happen, positivity as a narrative, even in our social domain, needs to be not just sustained but also ensured.