Nishad Avari pays tribute to M F Husain, who passed into the ages on Thursday morning.

Impressively long and poetic, the name Maqbool Fida Husain conjures up many associations for me, dating from my days in school to the present. Growing up in Mumbai, Husain's work, the legends that have always surrounded him, and the distinctive figure he cut striding around the city with a long paintbrush tucked under his arm were ubiquitous.

Everybody seemed to have a personal anecdote about the artist or had encountered him on one or more occasions, and it was almost as if we children took his presence for granted. From the famous, and probably exaggerated story about him offering to paint the walls of our school hall when his children studied there, to the prancing horses painted between Pundole Art Gallery and the American Dry Fruit store in Fort, and the framed napkin drawings and photographs that adorned the walls at his favourite Irani Cafe in Cuffe Parade -- he was everywhere.

It was only later, as I became more involved with modern and contemporary Indian art personally and professionally, that I understood that M F Husain actually represented the fact that nothing could be taken for granted. What he had managed to pack into a single lifetime, apart from creating a prolific body of work, many of us would need several to achieve.

From his humble beginnings in the village of Pandharpur in Maharashtra, his move to Mumbai at the age of 19, and several years spent as a struggling movie billboard painter supporting a young family, Husain rose to the task of defining a truly Indian idiom for our young nation's modern art, and representing it to the rest of the world.

Since the early 1950s, Husain's confident line and unique artistic vocabulary has acknowledged both the various trends in international modern art and traditional Indian sensibilities, on several occasions using classical Indian aesthetics as a substrate on which his images could be constructed. Employing popular artistic traditions, cultural icons, historical events and myth in his work alongside subtle satire and references to high culture, Husain's body of work was as accessible as it was provocative, firmly ensuring his place at the forefront of India's most popular and critically acclaimed artists for more than half a century.

Travelling and exhibiting around the globe, from China and the Czech Republic to Italy and Switzerland, Husain managed to court admiration and controversy in equal measure wherever he went. In Berlin, his short film Through the Eyes of a Painter won him a Golden Bear at the city's film festival. In Mumbai he created an epic mural for the impressive lobby of the Tata Institute of Fundamental Research, after winning a competition to design one. In Sao Paolo, he showed his paintings alongside Picasso's at the city's Biennale.

In New Delhi he was awarded the Padma Shri, Padma Bhushan and Padma Vibhushan by various Indian governments. In Rome, he was a frequent guest at the house of Roberto Rossellini and his second wife Sonali Dasgupta, who first met with his help. In New York, Harry Abrams published a book on his work, one of the first international monographs on an Indian artist. In Dubai he raced his fleet of expensive sports cars across the city.

And every time his audiences thought that they had seen it all, Husain would offer up something new to ensure the continued relevance of his art, and, of course, his continued place in the spotlight. From working with canvases of unimaginable proportions to impromptu live painting performances on any imaginable surface, from designing houses, museums and site specific installations to making a full-blown Bollywood film starring one of his many 'muses' Madhuri Dixit, Husain seemed the most comfortable when he was creating and when he was the focus of attention.

Unfortunately the attention his work and his outspokenness attracted was not always positive. On several occasions over the last few decades, Husain's paintings, particularly those of deities and mythological figures, have invited the ire of various right-wing religious groups in India and abroad. Violent protests were staged, fatwas were declared, property was destroyed, and eventually, after his life was threatened repeatedly, Husain was forced to leave the country.

It was in this self-imposed exile, spent between the United Arab Emirates, the United Kingdom and Qatar, that Husain passed away early on Thursday morning in a London hospital. Husain's passing marks not only the loss of a fundamental presence in the Indian art community, but a personal one for many people around the world whose life he was a part of. Even so, Husain will continue to live with us through his art, and his body of work will always hold immense relevance in the contemporary history of our nation and its art. 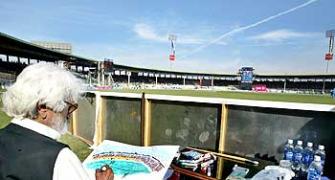 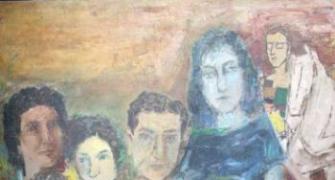 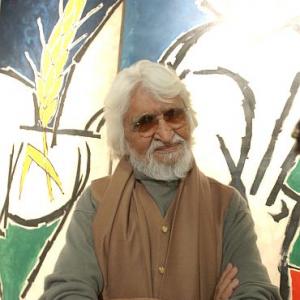 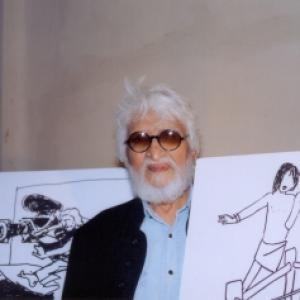