News
Business
Movies
Sports
Cricket
Get Ahead
Money Tips
Shopping
Sign in  |  Create a Rediffmail account
Rediff.com  » News » This is opening the door to mob rule

This is opening the door to mob rule

'Once such conduct becomes legitimate through political and popular sanction, then the ordinary citizen will have no defences left,' warns Shyam Saran.
Illustration: Dominic Xavier/Rediff.com Amidst the vulgar outpouring of accolades for the Hyderabad police killing four rape suspects in an 'encounter', it was reassuring to hear the Hon'ble Chief Justice of India sounding a note of caution.

While acknowledging the need for swift and efficient justice, he said: 'But I don't think justice can ever be or ought to be instant and justice must never ever take the form of revenge. I believe justice loses its character of justice if it becomes revenge.'

Put this alongside the statement reportedly made by Telangana Chief Minister K Chandrasekhar Rao who claimed that the encounter is a 'message for the entire country'.

He justified the encounter killing by pointing to 'pressure for immediate action'.

It was doubtful, he said, if justice would have been served through the courts since the 'Indian judicial process will go on forever'.

The Telangana government, far from distancing itself from this illegal act, publicly took credit for it even suggesting that the encounter killing had the sanction of the state political leadership.

Even the pretence of this being a case of security forces firing in self-defence has been abandoned.

The criminal justice system has to be made more responsive and policing of our streets must be made more effective, but to avoid the hard work and urgent reforms this requires in favour of arbitrary dispensation of punishment is reprehensible and dangerous.

Those who belittle the criminal justice system are themselves responsible for its infirmities.

In 2006, the Supreme Court had directed the central and state governments to 'set up authorities to lay down guidelines for police functioning, evaluate police performance, decide postings and transfers and receive complaints of police misconduct'.

These directives remain a dead letter.

Politicians regard the police as instruments of patronage and for targeting rivals.

There has been a steady erosion of professionalism and a sense of public service not only among the police but in the governance system in general.

India has one of the lowest density of police personnel in relation to its population.

The quality of personnel is poor and declining.

In Telangana, where the horrifying rape and killing occurred, the vacancy rate is 26% against the national rate of 24%.

And political leaders who are screaming the loudest about protecting our women go around with a security complement which often run into hundreds.

This includes several Members of Parliament who have cases of rape and murder pending against them.

Should they be subjected to summary justice on grounds that the 'Indian judicial process will go on forever'?

Instead of improving public security and enforcing laws, public anger is sought to be assuaged by resorting to deliberate and arbitrary killing of suspects, throwing all legal norms by the wayside.

Once such conduct becomes legitimate through political and popular sanction, then the ordinary citizen will have no defences left.

It is argued that in this case the guilt of the suspects was not in question.

Be that as it may, they should not have been deprived of their right to life without due process.

A dangerous precedent is being set, which exposes all the citizens of this country to the arbitrary violation of their Constitutional rights.

This is a fit enough case for the Supreme Court to take suo motu cognisance and bring to justice those involved in the encounter killings and the political leaders who self-professedly instigated it. 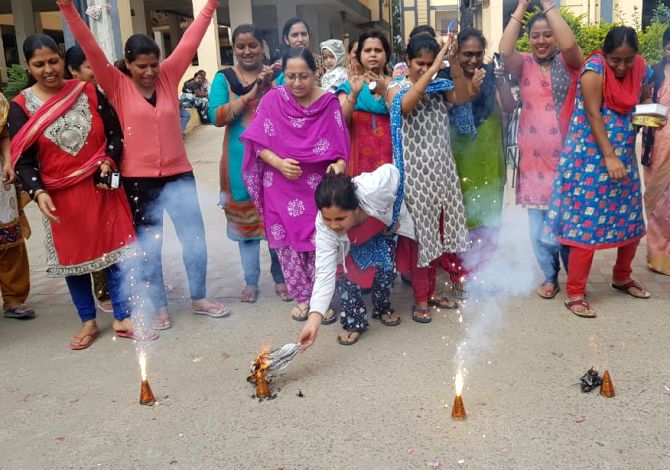 IMAGE: Neighbours of the veterinarian, who was raped and murdered, burst crackers after receiving the news that the accused were killed in a police encounter. Photograph: SnapsIndia

Popular sentiment and public outrage are cited to somehow justify recourse to instant and drastic "justice."

This is opening the door to mob rule.

Responsibility of political leadership lies not in pandering to such popular sentiment, but in ensuring that the law of the land is always upheld.

Electoral victory gives political leadership the privilege of serving the people of the country in accordance with both the letter and spirit of the Constitution.

There are well-meaning people who have applauded the encounter killings because of a genuine sense of outrage and even frustration.

But they need to step back and reflect that it is precisely those who have failed us in every aspect of governance who are being given the authority to deprive citizens of even their right to life without any legal safeguards whatsoever.

There is a tendency to think that what is being visited upon a fellow citizen today will never happen to us, law abiding as we think we are.

Until it happens to us.

The shortsightedness of the applause that greeted the denial of freedoms to our fellow citizens in Kashmir is depressing.

Each such case sets up precedent for the same being enacted elsewhere in the country.

If this is done arbitrarily by the State, then the door is wide open to the unscrupulous exercise of power.

In recent cases courts appear to accept that the State may impose any restrictions it wants on grounds of national security without spelling them out.

Reference may be made to vague terrorist threats or apprehensions of breach of law and order.

Often the aim is not to achieve conviction of suspects on the basis of tangible evidence.

The harassment through the investigation and incarceration process itself is punishment.

In the lawns of the Supreme Court there is a bronze sculpture of Mother India sheltering a child.

The latter represents the young Republic of India.

On his lap lies an open book of the laws of the land.

Etched on it is a balance representing equality of justice.

The message is clear: For the young republic to grow into a proud and enduring democracy, the child must never stray from the laws of the land.

The protective embrace of the mother will remain only so long as the laws are respected and observed.

Shyam Saran is a former foreign secretary and is currently senior fellow, CPR and a Business Standard columnist.