News
Business
Movies
Sports
Cricket
Get Ahead
Money Tips
Shopping
Sign in  |  Create a Rediffmail account
Rediff.com  » News » These Indo-Pak games have gone on for a long time

'There are retaliatory incursions, ambushes, captures and killings by Indian forces along the 700 km border; alleged spies are caught on both sides, then mutually traded as pawns; envoys are summoned in both capitals to be routinely given dressing downs.'
'And there is always a handy courier pigeon, like Sajjan Jindal, sent over to test the troubled waters,' says Sunil Sethi.
Illustration: Dominic Xavier/Rediff.com 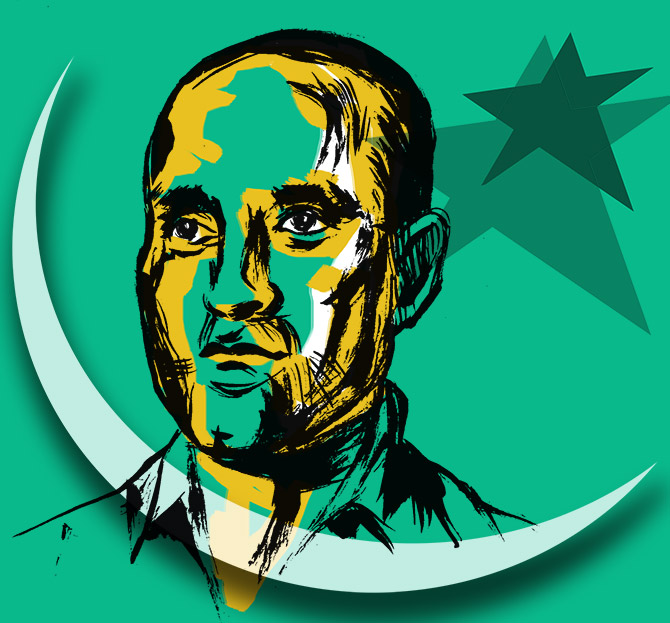 Was he perhaps enjoying a glass of chilled beer proffered by Mr Sharif from the hill station's famous brewery far from the heat and dust of the plains, the mud and blood of the LoC?

The gorier the killings, cloak-and-dagger ambushes and spy vs spy kidnappings of secret service operatives, Indo-Pak war games are shadowed by grotesque sideshows.

So it was last October when the jingoistic jungle cry of surgical strikes reverberated through the country, the tremors were felt in distant Bollywood with farcical force -- filmmakers and movie stars were made to cringe in apology and pay guilt money for hiring Pakistani actors.

Hawks and trolls are par for the course, but here's a comment posted by a retired IAS officer after the beheadings: 'May I urge the Indian government to order the forces to march upon Islamabad after capturing Lahore?' he demanded after asking 'What is this renowned mehman nawazi (hospitality) in reverse?'

Tragically, the memory of Narendra Modi dropping in uninvited to avail of 'Mian Sahib's' hospitality and wish him a happy 66th on Christmas Day 2015 is all but erased.

A few days later, Pathankot's air force base was attacked by terrorists; Burhan Wani was killed in Kashmir in July; then Uri happened in September.

Kashmir has been on a slow burn since, and Indo-Pak relations have plunged into a deep hole. The Indian Express reports that the army lost 60 soldiers in 2016 nearly -- twice the number killed in 2014 and 2015 -- to a combination of Pakistani gunfire and terrorist attacks.

The last time there was a ghastly beheading, of soldier Hemraj in 2013, Sushma Swaraj, breathing fire and brimstone, demanded 10 heads from the other side.

Today, the response is measured, of old platitudes such as 'We will give a befitting response.' Yes, retaliation is necessary, but what deeper surgery does the BJP have in mind after the spent fusillade of surgical strikes?

It's a little facile to wholly blame Pakistan for fuelling the fire in Kashmir. The turnout for the Lok Sabha by-poll in Srinagar last month was an abysmal 7.14 per cent; the Anantnag by-election has been postponed; and the BJP-PDP alliance itself is a battered victim of the unceasing volleys by stone-pelting protestors.

New Delhi is a town that seethes with Indo-Pak conspiracy theories and among the stories afloat are that link the beheadings to Pakistan's chief of army staff General Javed Bajwa.

If so, then given his appointment by Mian Nawaz Sharif last year as a less hawkish successor to General Raheel Sharif suggest a deteriorating relationship between Pakistan's political and military leadership.

This has always been a delicate balance in Pakistan; it could be that given the Pakistani premier's troubles in explaining away his family's illegal overseas fortune, the balance is shifting.

And why did the violent beheadings come in the aftermath of Mr Jindal's warm reception by the Pakistani premier?

All these suggest an intricate ongoing cat-and-mouse game, a decoding of complex ciphers.

Add to this the secret agent drama, of the proposed execution of captured naval commander-turned-sea merchant Kulbhushan Jadhav, versus the sudden disappearance last month, of former Pakistani army officer Lieutenant Colonel Mohd Habib from the India-Nepal border, and you have a sub-plot worthy of a John Le Carré espionage thriller.

Cooler-headed observers of the currently fraught India-Pakistan relationship will tell you that these games have been going on a long time.

There are retaliatory incursions, ambushes, captures and killings by Indian forces along the 700 km border; alleged spies are caught on both sides, then mutually traded as pawns; envoys are summoned in both capitals to be routinely given dressing downs.

And there is always a handy courier pigeon, like Sajjan Jindal, sent over to test the troubled waters.

However, the political and strategic reality is this: Narendra Modi's Pakistan policy is wayward, inconsistent and unplanned. It is running out of options.

The ruling party has no tangible solution to lower temperatures in Kashmir either.

The media carried a curious little item two days ago. A group of 47 blameless schoolchildren from Lahore invited by a Delhi NGO for a visit were hastily sent back hours after their arrival.

The foreign ministry spokesman said their visit was mistimed. A tiny window had opened, but it was slammed shut.

Apart from excellent PR, if the Indian government had provided them security and hospitality, it would have spelt India's confidence and maturity and perhaps touched a few hearts and minds on both sides of the border.

But in the tortured Indo-Pak relationship -- of one step forward and two backwards -- the gruesome and grotesque go hand in hand.