'India, he announced, is a "free, open, inclusive region" committed to the "common pursuit of progress and prosperity".'
'Prosperity yes. But free? Open?'
'Ask the Dalit tanner, the Muslim butcher, the Christian priest who writes pastoral letters.'
'Ask cattle traders of any religion or a Delhiwallah who enjoys a juicy steak.'
'Ask a Muslim who falls in love with a Hindu or vice versa,' says Sunanda K Datta-Ray. 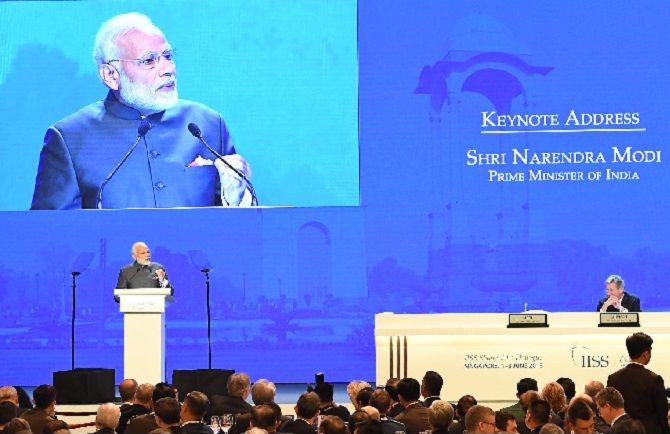 Yesterday's Nehru jacket wasn't transformed into a fashionable designer garment when cut out of expensive weave instead of plain khadi and marketed as the Modi jacket.

Nor did P V Narasimha Rao's 'Look East' policy become passé just because the no-longer-so-new regime announced with fanfare that it would 'Act East'.

Indeed, apart from some high-powered personal publicity, Act East hasn't realised the railway that was going to link Ho Chi Minh City with London via Delhi while the promised roads, pipelines and ports are still pies in the sky.

Donald J Trump’s 'Indo-Pacific' is an inexpensive compliment to a country where Trump Towers make money.

That might explain why international news channels virtually ignored Narendra D Modi's keynote address at Asia's premier security conference, the Shangri-La Dialogue in Singapore. They focused entirely on the US defence secretary's speech.

Of course, the voice of America always commands attention but he also had something to say -- a stiff warning to China. India's media barely reported James Mattis' address. But then ours is an Indocentric world.

Anyone reading Indian newspapers in the 1950s could have been forgiven for supposing that Jawaharlal Nehru ruled the world. Now, the view seems to be that the very act of globetrotting at public expense makes Modi a global statesman.

This is inevitable when reporters covering foreign events rely heavily on briefings by their own government's spokesmen who naturally have a nationalist agenda.

I remember the BBC's Indian correspondent being ordered out of a briefing abroad where State secrets were to be imparted to Indian journalists for the edification of domestic audiences.

I was familiar with the treatment for I worked part-time for a British newspaper. On one such occasion, India's ambassador invited me to dinner after an official reception for the visiting external affairs minister.

The minister didn't know me, but the minders from Delhi escorting him around the lawn did. Every time they glimpsed me, they swung the minister round to safer terrain.

Eventually, they must have run out of lawn to escape to. Or, maybe, the minister smelt a rat.

The ambassador drew me aside, apologised profusely, and said it would be easier for him if I left and returned later to dine with him and his wife.

The minister might say something for the ears of Indian journalists only. I didn't count as one, certainly not to the minister's press party. Whatever they might say in private, publicly they were jingoists to a man.

There was none of that dissimulation about a Chinese Singaporean editor who carried patriotism to the extent of sticking to Singapore time on his frequent trips abroad.

He would be fast asleep in bustling Kampala if Singapore was sleeping.

He would be up and about in somnolent Kharkov if it was daylight in Singapore.

I tumbled to his unique lifestyle when he had an assignment in Karachi and I tried to help with introductions to Pakistani friends. He didn't need them, thank you.

His hours ruled out local socialising. Moreover, his Singaporean readers weren't interested in what foreigners thought.

All this came to mind as loyalists trumpeted that no Indian prime minister, not even Narasimha Rao whom Lee Kuan Yew hailed as India's Deng Xiaoping, had been singled out for the honour of delivering the keynote address at the Shangri-La Dialogue.

True enough, but what did Modi say to justify that honour? His listeners can hardly have been astonished to hear that 'the foundations of the global order appear shaken' and 'the future looks less certain'.

Or that 'we live on the edge of uncertainty, of unsettled questions and unresolved disputes; contests and claims; and clashing visions and competing models'.

Modi concluded sagely that this contentious world 'summons us to rise above divisions and competition to work together'.

'Is that possible?' he asked and answered himself with a resounding 'Yes!'

The world is waiting for his secret prescription.

India, he announced, is a 'free, open, inclusive region' committed to the 'common pursuit of progress and prosperity'.

Ask cattle traders of any religion or a Delhiwallah who enjoys a juicy steak.

Ask a Muslim who falls in love with a Hindu or vice versa.

The bigger failure is the absence of any coherent policy on China.

Sycophants at home may applaud waffling as statesmanship. Abroad, it looks like timidity, recalling Pope's lines about being 'willing to wound, and yet afraid to strike'.