News
Business
Movies
Sports
Cricket
Get Ahead
Money Tips
Shopping
Sign in  |  Create a Rediffmail account
Rediff.com  » News » The PM has been reduced to levels never seen before

The PM has been reduced to levels never seen before

The prime minister should resign with the admission that he is not fit for the job assigned to him. He and his party must realise that there cannot be a government of any merit, without a prime minister to guide it, says Seema Mustafa.

The Washington Post in its story 'India's 'silent' prime minister becomes a tragic figure' with the headline saying it all, is really a repetition of what has been appearing in sections of the Indian media for years now. There is little new in the report that has sent ripples of consternation down the government and the Congress party hierarchy, except for the fact that the American media has finally decided to end the honeymoon with Prime Minister Manmohan Singh in recognition of the fact that his honeymoon with the Indian middle class ended a long time ago.

Dr Singh does cut a sorry figure as he sits motionless, and expressionless, through the Parliament sessions and has more and more started appearing as a leader who has given up, or one should say given in. Nothing seems to move him, and the post of the prime minister has, in the process, been reduced to levels never seen before.

He does not meet people any more, he barely travels within India, and seems unaware that he is sitting on top of one of the most corrupt governments this country has ever seen. Scam after scam rolls by without the weak doctor blinking an eyelid, as the government remains unaccountable and the institutions of democracy shake under the pressure.

The government's response to the newspaper report is again a case of over-reaction, as surely it cannot be anyone's case here that the media cannot write freely and independently. Particularly the world media that follows its own laws, and clearly perceives the prime minister to be far from functioning. The fuss, and the strong reactions seeking an apology from the Washington Post, arises from several factors, and unfortunately, none of them complimentary to the UPA government.

One, the report that is really a repetition of all the Indian media has said several times before hurts only because it is from the Washington Post. And this government cares more about the opinion there, than the opinion here as has been demonstrated over and over again by Dr Singh and his cabinet cronies before, and since, the India US civilian nuclear energy agreement. In short, it hurts and the government is finding it difficult to ignore it as it does the Indian media.

Two, the Post report also reflects the inability of this government and the ruling party to introspect. Instead of taking the criticism on board, and taking measures to revive the sagging image of the prime minister, the government and the Congress party have emerged fists flying in the belief that this will work in silencing the 'opposition.'

It is not as the Washington Post, unlike the big media here, might not be as easily retract what it has reported as it has little to lose. And for every one report there will be several such reports as these cats, when out of the bag, have a tendency to multiply with increasing rapidity.

" but as the image of the scrupulously honourable, humble and intellectual technocrat has slowly given way to a completely different one: a dithering, ineffectual bureaucrat presiding over a deeply corrupt government," read the Washington Post report, brutal and frank in its assessment.

What it does not add is that the bureaucrat seems to have given up, as Dr Singh gives a pretty good demonstration of the civil servant who, pulled in all directions, is resigned to being a dummy. He does not have the politician's courage to strike out for whatever he believes in, and seems to have resigned himself to servility on the one front, and abject inertia on the other.

In the process he has become the Washington Post headline, silent and tragic, more so perhaps for those who had expected great things from him at one point in time.

Those who have worked closely with Dr Singh when he was just a bureaucrat decades ago seem to have a better judgment of his personality and character. And see him as a bureaucrat who has managed to work the system to his advantage. His apparent humility has made him a favourite of the politician who are not threatened by his presence, and impressed by his knowledge. Unfortunately these qualities do not work for a prime minister who is required, and expected, to lead from the front and steer the complicated ship to some level of governance.

It is true that his cabinet colleagues are more loyal and responsive to their respective party presidents than to him. But surely it was for Dr Singh to crack the whip. He failed to do so, and now cannot really sit back and cry about the fact that no one listens to him. If that is true, as it appears to be, the prime minister should resign with the admission that he is not fit for the job assigned to him. He and his party must realise that there cannot be a government of any merit, without a prime minister to guide it. And a leader who believes in sitting it out, under a party that feels less threatened if he does exactly that, is not going to be able to manage this complex country, in or outside Parliament.

Governance is not about clever tricks, and the Manish Tiwari kind of rhetoric. These cannot replace decisions and action, but unfortunately this is all that seems to be happening. The flurry of activity over the Washington Post report is precisely this, a great deal of noise from empty vessels who are scared of introspection, and hence a recognition of the hollowness within. Thus, it is always better to beat the messenger in the hope that his news dies with him. It does not work, but then the Congress party and its government is too self absorbed to realise this. 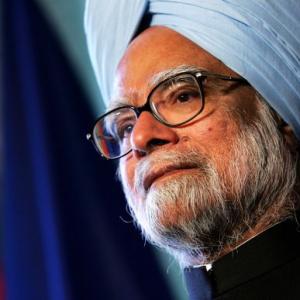