The mistakes Shashi Tharoor made

Shashi Tharoor has left South Block unsung and unwept. Whoever thought that it would be such a short career for the high-profile minister? However, he had brought it upon himself by his own follies.

Would Shashi, as his friends know him, have survived if he had been more careful? Does he have the qualities of a successful politician who should have base, support and clean image? He began well with the blessings of Congress President Sonia Gandhi and also the prime minister. They had shown their support and tolerated his mistakes these past 10 months. The media too liked him for his telegenic face.

What is Shashi's background? He had been a bureaucrat in the United Nations for many years. He had come close to then United Nations Secretary General Kofi Annan. Once Annan became the UN chief, Shashi's career also bloomed. Annan, who even supported his candidature to succeed him, fully backed him. Shashi persuaded Sonia Gandhi and Manmohan Singh to support him as India's candidate despite the negative reports from the ministry of external affairs. He lost to the Korean candidate Ban Ki-moon. Now after the present scandal about Shashi's close friend's sweat equity in the IPL-Kochi franchise, many wonder how India could have supported his candidature.

What were Shashi' mistakes which came in the way of his success? First of all, he continued to live in the past and behaved like the international bureaucrat while had had moved on in life to become a politician in India and also a minister. Although he switched over to wearing an angavastram and Nehru jacket, his lifestyle did not change.

Without realising that the Congress culture would not allow him to live an opulent life, he occupied a suite in a five star hotel after his election instead of staying in Kerala Bhavan or any other place allotted to him by Parliament.

When this came under the media glare, Finance Minister Pranab Mukherjee had to tell him to move out of the hotel.

Secondly, Tharoor did not learn any thing from his past mistakes and continued to think that no one can touch him. He should have realised what a politician's life in India is, particularly from a highly political state like Kerala. He was being watched through a microscope but he did not notice this.

Many other politicians use their clout for various things but they are careful about how they do it. Tharoor used his personal clout as a minister for the high-profile Kochi IPL negotiations. The 'sweat equity' given to his friend Sunanda Pushkar is seen as an impropriety, which as a minister he could ill afford.

Thirdly, friends and supporters are very essential for a politician. It is their pressure and support, which helps a politician to flourish. The local people resented Shashi because they felt he has been brought from outside and thrust on them. The Congress went out of the way in ensuring his success in the Lok Sabha election.

Kerala politicians know how to nurture their constituency but in Tharoor's case, he neither befriended his colleagues nor was he available to his constituents with the result he had no support from his state.

Fourthly, having won the seat with a handsome majority, Shashi was lobbying for the post of Cabinet minister for the external affairs ministry. However, he had to be content with becoming a junior minister in that ministry. Once he started going to his South Block office, he began to make embarrassing statements on his ministry and often had to be told to keep quiet. He neither befriended his officers nor his senior minister (S M Krishna) who began to see him as a threat. Ultimately, whenever he put his foot in his mouth, there was no support from them.

Fifthly, Tharoor did not make sure that as a minister he should leave no trail even if he was indulging in financial bargains with the IPL managers. His biggest mistake was to get the 'sweat equity' to his close friend Pushkar, who had no credentials to get such a bonanza. Even his party leaders did not believe that he had no financial involvement in the IPL deal. That is why the prime minister and Sonia Gandhi let him go, bowing to party pressure.

Sixthly, his continuous efforts to bring the government and the party to embarrassment were not liked by the party bosses. His calling the economy class as the cattle class was jarring for a party, which was claiming to fight for the 'aam admi'. His frequent tweets also became an embarrassment.

Tharoor added to these by speaking out of turn when he had gone with the prime minister to Saudi Arabia recently. The party did not take any action on all these but when the IPL controversy came, it was beyond the party and the prime minister to defend him any more. This was visible when the party distanced itself from the controversy asking Tharoor to defend himself.

Seventhly, he adopted a brazen attitude towards the IPL controversy going to the extent of even declaring that he would not resign even as the party bosses were watching his every move. Subsequently, he had to eat his words and put in his papers.

Last but not least, Tharoor took on somebody like IPL Commissioner Lalit Modi who had some powerful backers. When the scandal broke out, Tharoor was left without any backing from any quarters and had to defend himself.

The lesson Shashi should learn now is that he has to play by the rules of the game and cannot have his own rules. At least now he should realise the mistakes and lie low for some time if he proposes to continue in politics. If he feels enough is enough, then he has other options to choose. He has opened the IPL can of worms. One has to see where it leads him. 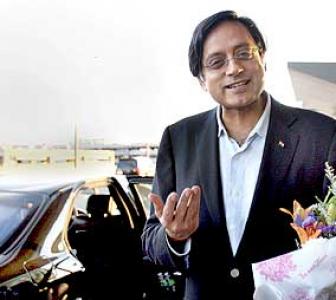 'Politics is no place for humour' 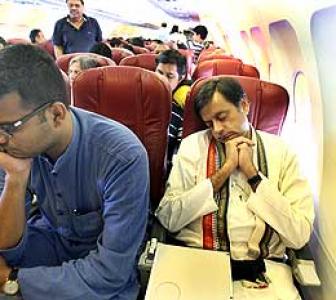 Holy cow! Congress and the power of 71 characters
Twittering about Shashi's tweet

Tharoor was made a sacrificial lamb 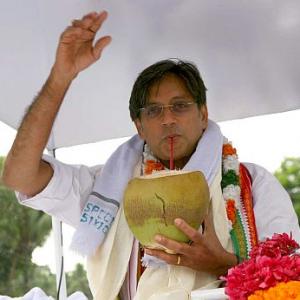