News
Business
Movies
Sports
Cricket
Get Ahead
Money Tips
Shopping
Sign in  |  Create a Rediffmail account
Rediff.com  » News » The clock in Kashmir has been reset to 1993

'This was the worst phase yet in the state's human rights history.'
'Notorious interrogation centres were set up, large numbers died in firing on civilian mobs.'
'This is what today's generations might identify better as the Haider phase in Kashmir's history,' says Shekhar Gupta.

The United Nations Human Rights Council's report on Kashmir is so fatally flawed that it was dead on arrival.

Debating its accuracy, fairness, methodology or motive is a waste of time.

Its fatal flaw is political. It is one thing to let NGO-type activists take over the world's premier human rights body, but quite another to exercise no political oversight.

At one level, it tells you how incompetently the UN is being run.

On another, it shows the damage you can do to those you have set out to defend.

Does this report embarrass or shame India or Pakistan? Not in the least.

Both treat Kashmir as a blood feud. India will not be shamed by its human rights record: It believes it is only fighting a nasty, cross-border terrorist assault.

Pakistan won't be embarrassed by just another report stating that it is funding, feeding and arming this mega terror operation.

It believes it's engaged in a moral campaign for justice.

It also wears much nastier descriptions such as 'International Migraine' and 'University of Jihad' like badges of honour.

Both will fight to the last Kashmiri if that is what it takes.

Will they bother about this idiotic UN report where the 'researchers' haven't even been on the ground in Kashmir once, any side of the Line of Control? They won't.

But that is not the biggest problem.

We call it idiotic not because of the quality of its research, but for its expectation that it will help the people of Kashmir.

On the contrary, it will harden India's approach.

It will also encourage Pakistan to shove more Kashmiris and its own expendable youth into a jihad in the renewed hope that one day, someday, it will drive India away in shame, fear or pain.

We can exchange notes on it a decade from now when the current high commissioner for human rights has retired to play golf on his generous UN pension.

The quality of successive secretary-generals over three decades tells us that the UN doesn't necessarily hire its bureaucrats for intellect or ability. It is no surprise if the current lot doesn't even bother to look at the history of its own interventions.

In so many unfortunate ways the Kashmir situation is back to the perilous 1990s. That is also when UN and Western human rights pressures were the greatest on a much weaker India.

How did it respond then? It passed a unanimous resolution in Parliament, resolving to recover all of the territory in Pakistan occupied Kashmir.

A bipartisan delegation led by Opposition leader Atal Bihari Vajpayee, with then minister of state for external affairs Salman Khurshid as his deputy, won a historic vote at Geneva. Never mind that they had to make common cause with human rights rogues like China and Iran.

This UN report will achieve a similar closing of ranks.

Remember, even before the ministry of external affairs's official condemnation was out, Congress spokesmen were on TV, backing the government.

Shujaat Bukhari's assassination took our minds away from the most toxic parts of this report. On both sides, maybe it is deliberate.

India cannot take notice of a provocation as grave as a UN body formally asking for self-determination in Kashmir and not declare war over it.

It should break the Pakistani hearts too because self-determination enlarges the choice to independence.

Pakistan has never accepted that. Nor did the UN resolution of 1948.

In any case, the UN has not talked of self-determination or plebiscite since the 1972 Simla Agreement, which redefined Kashmir as a purely bilateral issue.

Pakistan may have invoked the resolutions occasionally, but never insisted on it in any bilateral agreements and other joint declarations since then -- in Lahore, Islamabad or Sharm El Sheikh. These have only talked of resolving the dispute bilaterally.

Since we treat the 1989-1994 period as the worst five years in the Kashmiri insurgency, we need to debate if we are back to that square.

There is bitter alienation, politics has lost credibility, human rights pressures have built up, the Pakistanis are emboldened, the LoC is alight and our national politics is broken.

Remember the two things that brought India together in anger then: Pressure from Western human rights organisations and that disastrous statement from then US assistant secretary of state Robin Raphel questioning the validity of the instrument of Kashmir's accession to India.

Now this irresponsible UN report has brought in both these provocations.

Having vented at the stupidity of the UN repeating its own and the Western powers' blunders (as personified by Robin Raphel in 1993), we should also reflect on how we got here.

Simple answer: By making blunders very similar to those of the past.

The trouble began in 1989, when India was in political transition and an ideological curiosity came to power under V P Singh. Curiosity because it was the government of a minority coalition kept in power by the Left and BJP support from outside.

The BJP wanted a 'muscular' approach to Kashmir. So Jagmohan on the BJP's say-so was sent as governor to crush the militants. But the government also had an aggressively pro-Muslim core and depended on the Left as well.

We had one centre of power causing injury and another applying balm. As to where the home minister's heart was, we don't need to guess.

The result was disaster.

Later, as a wiser, ruthless and more clear-headed Narasimha Rao took over, the armed forces were given unlimited resources, a free hand, and the mandate to crush it.

This was the worst phase yet in the state's human rights history.

Notorious interrogation centres were set up, large numbers died in firing on civilian mobs, and the Bijbehara firing massacre and the Kunan Poshpora mass rape allegations all came up in that period as did the Charar-e-Sharief crisis.

This is what today's generations might identify better as the Haider (Vishal Bhardwaj's film) phase in Kashmir's history.

By the end of Rao's term, however, militancy had been crushed at great cost to public sentiment. Essentially, it was the price India paid for the V P Singh government's woolly-headedness.

We've seen some of the same confusion lately.

The difference is, unlike V P Singh's minority coalition on daily wages, this is a strong nationalist government with a sweeping majority.

But what has it done? It aligned with the PDP, ostensibly to bring opposite ideologies and the valley and Jammu together.

It was never able to mould its own instincts accordingly. So, you again played with the gun and the bandage at the same time. It was again like having Jagmohan and George Fernandes in the same establishment.

The missing elements -- human rights pressure and Robin Raphel questioning Kashmir's accession -- have now been brought in by this unthinking UN report.

The clock in Kashmir has been reset to 1993. 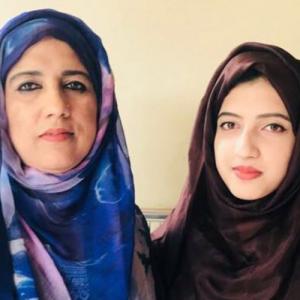 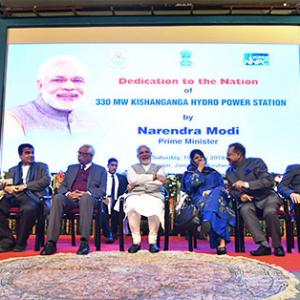