Tamil bloc may hold the key in Lanka's power struggle

In a Sri Lankan House of 225 members, the cut-off figure comes to 113. With Wickremesinghe side touching 102 and Rajapaksa’s team at 101, the three-party Tamil National Alliance with 16 members and the left-leaning Sinhala-Buddhist nationalist Janatha Vimukthi Peramuna with 6 members hold the key.

But with the latter declaring that they will not support either formation in a vote count,that leaves the TNA as the deciding factor, says N Sathiya Moorthy. 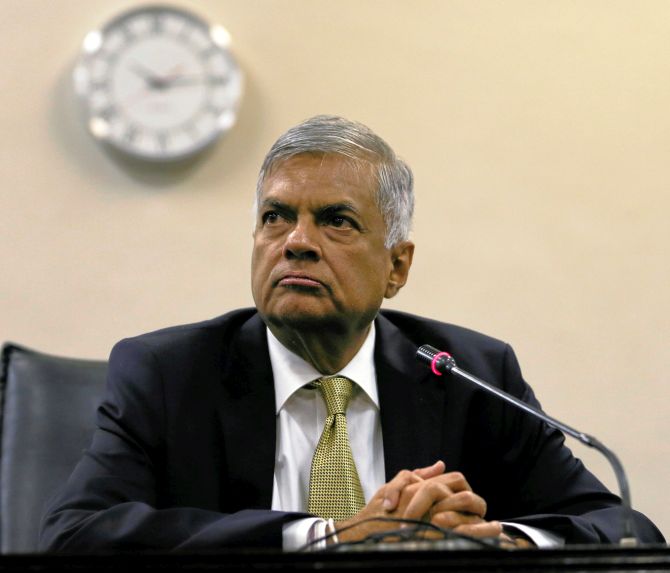 The continuing ‘democracy-deficiency discourse’ notwithstanding, in the evolving political situation facing neighbouring Sri Lanka, the 16-MP Tamil National Alliance may be holding the key just now.

This comes in the footsteps of the historic elections 2015 which incumbent President Mahinda Rajapaksa lost to ‘rebel’ Maithripala Sirisena, as ‘minority’ Tamils, Muslims and Upcountry Tamils of recent Indian origin (all three considered separate ‘ethnicities’ alongside majority Sinhala-Buddhists) voted almost en masse for the latter.

Northing explains the electoral hold of the 20-25 per cent minority voters in the country than the way Rajapaksa readily conceded defeat once the final results from the Tamil majority Northern Province and multi-ethnic Eastern Province, where again the minorities hold a two-thirds sway, were known before crack of dawn on January 9, 2015, about 12 hours after voting ended. The final polling figures from the seven ‘Sinhala-majority’ provinces would come only another 12 hours later, but the Tamil-Muslim ‘minority mood’ had sealed the electoral fate of Rajapaksa and in a way that of the presidential polls, too, then.

Today, when the die seems to be cast in favour of ‘sacked’ Prime Minister Ranil Wickremesinghe of the United National Party, the Sri Lankan GOP, figures however tell a different, touch-and-go story. This is despite the massive demonstration that the UNP organised, protesting against President Sirisena’s ‘massacre of democracy’, in the national capital of Colombo, on Tuesday.

The ‘constitutional coup’ of last Friday evening saw Wickremesinghe being replaced by former president Rajapaksa, as prime minister -- Sri Lanka’s very own Vladimir Putin in the making, moving from one constitutional position to another but keeping power and votes intact.

At the end of the day, the current constitutional crisis has to find a resolution only in Parliament, where the odds are equally-placed, or at least seemingly so. Wickremesinghe has a point that the issue has to be finally settled in Parliament, but then his reluctance to move the Supreme Court has also lent greater credence that the president had the power to sack him, at least under the ‘original’ Sinhala version of the tri-lingual constitution, an area that elitist UNP drafters seemed to have ignored or overlooked in the formulation of the crucial 19th Amendment after the duo came to power in 2015.

Otherwise, in a House of 225 members, including Wickremesinghe’s UNP Speaker Karu Jayasurya, the cut-off figure comes to 113. At present the three-party TNA with 16 members and the left-leaning Sinhala-Buddhist nationalist Janatha Vimukthi Peramuna (JVP) hold the key, as these are the only two parties/groups that have not identified with either of the two stake-holders.

The JVP has six members in Parliament, and the party has declared that they will not support either Wickremesinghe or Rajapaksa in a vote count in the House, whenever and however held. That leaves the TNA as the decisive and deciding factor, if the alliance could stay together, as it has been thus far -- despite on-again-of-again internal squabble.

Figures speak for themselves. In Parliament, Wickremesinghe’s UNP has 87 members. He also has the re-assured and continuing support of the Sri Lanka Muslim Congress with seven members; the All-Ceylon Makkal Congress’s (earlier ‘All-Ceylon Muslim Congress) five; the Tamil Progressive Alliance of some Upcountry Tamil parties, six; and the centre-right Sinhala Buddhist-nationalist Jathika Hela Uramaya (JHU), two. The total adds up to 102, including the speaker, 11 short of the ‘magic figure’ of 113.

Against this, the Rajapaksa team starts with his original strength of 62 MPs from the breakaway SLFP-UPFA, otherwise known as the SLPP-JO. He now has the backing of Sirisena-led parent SLFP-UPFA,’s 33. An anti-LTTE Sri Lankan Tamil party, namely, the Eelam People’s Democratic Party of former Minister Douglas Devananda (one), and five defectors from the Wickremesinghe camp, of whom at least four of have been sworn in as ministers, are also on the Rajapaksa side. The defectors include at least two parties representing Upcountry Tamils, or ‘Indian Origin Tamils’ (IOT). The Rajapaksa total adds up to 101, only one short of Wickremesinghe’s, but neither can touch the base-line, as yet.

Sri Lanka does not have an anti-defection law, and all those talking democracy in that country and for that country have never encouraged a law of the kind, which has done some good in and for larger neighbour, India, the world’s largest democracy. Even as the nation is engaged in an unproductive exercise of formulating a new constitution, no party or leader has even remotely talked about the urgent need for an ‘anti-defection’ law in Sri Lanka. They are not expected to do so any time soon either.

It is not without reason. Under the 1978 constitution, which introduced the controversial ‘proportional representation’ scheme for parliamentary and provincial council elections, akin to those for Indian states but with powers equivalent to that of India’s Union territories, no party is expected to sweep the polls. It has always been a coalition that has won parliamentary polls. The president is elected through direct elections, but given the numbers game that is evenly packed in the Sinhala majority constituency, the minorities count even more than is readily acknowledged.

It is in this context that the absence of an anti-defection law is keenly felt. Barring the ‘out-going’ Sirisena-Wickremesinghe ‘coalition of inconvenience’ , almost every other ruling combine has survived and grown in strength only by encouraging post-poll defections, at times of individuals but mostly of smaller parties, especially of two of the three ethnic minority communities, namely Muslims and Upcountry Tamils. The hard-core Sri Lankan Tamil community and their TNA, and its predecessors, had often survived such an onslaught, from time to time.

In the unveiling scenario, the Wickremesinghe camp has 102 MPs and Rajapaksa, 101. With the six-member JVP declaring its ‘neutrality’ in vote, the required number for a majority comes down from 113 to 110, excluding the speaker with his ‘casting vote’ in times of a ‘tie’. In the past, including the post-war 2010 parliamentary polls, some of the Muslim parties that had won in the UNP’s company, casually walked over to the Rajapaksa side, on the permissible, specious plea that they could serve their constituency interests only that way.

If not as yet this time, the tendency is also for the leaderships of some of many of the ‘minor parties’ to yield to pressure from their constituencies and/or to that of their MPs, many of whom felt deprived by a high-handed Wickremesinghe when he was prime minister until last week.

Even more is the tendency of some UNP back-benchers, who too have been feeling left-out from the party’s decision-making process. It is even more so in the case of many aspirant, second-line leaders waiting to draw out the daggers for Wickremesinghe, but then the way the Sirisena-Rajapaksa duo did it has forced them to stay together, in the party and for the party -- rather than for the leader. Their unfulfilled leadership aspirations, once the current crisis blows over, should be the deciding factor.

It is in this context that the TNA’s 16 MPs become the deciding factor, if it came to that. TNA’s Leader of the Opposition, R Sampanthan, has since met with both Wickremesinghe and Rajapaksa. He was also reported to have said soon after the ‘Friday developments’ that the TNA was not bothered about the intra-Sinhala prime ministerial race, but only about what either of them can promise the larger Tamil community in terms of post-war rehabilitation, power-devolution and political package -- and also the terms of delivery.

The TNA has since clarified that Sampanthan’s meeting with Rajapaksa bordered on a courtesy call, and did not amount to the alliance recognising his ‘prime ministership’. The party said further that the two leaders did not discuss any substantive issue, including the TNA continuing with the status of the ‘Leader of the Opposition’ in the changed circumstances.

Though the 16-member TNA can make or break a new government in the country, it is still unclear if all 16 MPs would travel together from now on and would vote as the leadership commands. The tendency to believe that none of them would want to be seen as supporting a Rajapaksa dispensation is there, but that does not automatically mean that all of them would rather have Wickremesinghe back and firmly in the saddle. They may just decide to look the other way, individually or collectively.

For the TNA and the Sampanthan leadership, the constitutional crisis could not have come at a worse time. Only a week earlier, the TNA’s ‘rebel’ chief minister of Northern Province, C V Wigneswaran, had walked out, to float the ‘Tamil People’s Alliance’ -- which is different from the ‘Tamil Progressive Alliance’, another, already existing party of Upcountry Tamils.

The TNA leadership has not had the time to assess the Tamil people’s mood after the Wigneswaran act. Now, one wrong step by the TNA, and ‘hard-liner’ Wigneswaran could hijack the traditional ‘Tamil constituency’, substantially, if not wholesale!