'Pakistan's trump card is that it is the only credible guarantor on the horizon who can reasonably assure the Western world that Afghanistan will not again become the revolving door for international terrorism.'
'Trust Pakistan to play this card optimally,' explains Ambassador M K Bhadrakumar. 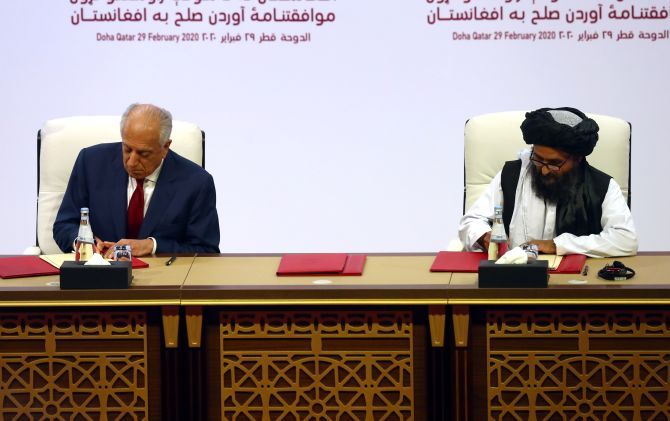 IMAGE: Mullah Abdul Ghani Baradar, leader of the Taliban delegation, and Zalmay Khalilzad, the US envoy for peace in Afghanistan, sign the agreement at a ceremony in Doha, Qatar, February 29, 2020. Photograph: Ibraheem al Omari/Reuters

The chasm between illusion and reality in politics remains perennial.

Wars seldom ended according to the script of peace agreements. The fall of Saigon in April 1975 ending the Vietnam War, with the defeated Americans hastily retreating in helicopters from the rooftop of their embassy, was not anticipated in the Paris Peace Accords of January 1973 that was painstakingly negotiated by Henry Kissinger and North Vietnamese politburo member Le Duc Tho.

Therefore, the US-Taliban peace agreement signed in Doha must be put in proper perspective. Indeed, there can't be two opinions that the curtain is coming down on what President Trump called the 'endless war' in which America squandered away over a trillion dollars and lost thousands of lives with no victory in sight.

Equally, without doubt, this is the finest hour of Pakistan's statecraft since the country's creation in 1947.

The odds may seem loaded against the dawn of peace in Afghanistan. After all, it is a hopelessly fragmented country, desperately poor with a subsistence economy where opium production is the principal source of income, a critically important geopolitical fulcrum for the Eurasian supercontinent (full of very valuable resources and also a pipeline route for oil and natural gas) and, most important, a playpen for al-Qaeda and Islamic State.

No doubt, each of these variables will surge in the coming weeks and months. President Ashraf Ghani has already put a question mark on the release of over 5,000 Taliban prisoners from prison, which has been an important pre-condition that finds specific reference in the Doha pact.

However, in such pacts, what is more important is often what is not mentioned.

Clearly, Ghani fears that the formation of an interim government becomes unavoidable to steer the inter-Afghan negotiation, and that he is expected to walk into the sunset shortly.

Ghani won't like that prospect. But can he hold the peace process ahead to ransom?

Power flows through the barrel of the gun in conflict situations, but in Afghanistan, there is the added reality that Ghani's government will collapse the moment the US ends its funding. Which means Washington calls the shots in calibrating the implementation of the Doha agreement.

And Washington will not tolerate 'spoilers' -- Afghan or non-Afghan -- on an enterprise where its core interests are at stake. Therefore, the Afghan peace process cannot be stopped even if turns out to be tortuous and protracted.

On the other hand, the Doha pact is a step forward, because it rests on a 'foundational agreement”' in the nature of the matrix of mutual understanding between Washington and Islamabad, which provides its underpinning and also creates a road map for the period ahead.

This matrix surfaces in Trump's startling disclosure on Saturday that he will be 'meeting personally with Taliban leaders in the not-so-distant future', as also in the cryptic remark by Pakistani Foreign Minister Shah Mehmood Qureshi in Doha on the same day that 'We want a responsible (American) withdrawal (from Afghanistan).'

The legitimacy that Trump has given to the Taliban even before the inter-Afghan dialogue has commenced, and Pakistan and the Taliban's consent to a 'responsible' US withdrawal from Afghanistan form two key templates of the peace process.

Trump, in essence, has already determined that the US can do business with the Taliban even before the latter gets mainstreamed.

Trump also signals the inevitability of the Taliban being in a leadership role in Kabul in the very near future. Put differently, Pakistan becomes a stakeholder in the continued US presence in the region, as hinted by Qureshi.

We may, therefore, expect a smaller US footprint in Afghanistan with beefed-up intelligence capabilities, but quite obviously, the Trump administration still doesn't plan on a full withdrawal.

Pakistan and the Taliban are apparently quite amenable to that idea.

Fundamentally, the Afghan war is mutating. No surprises here, since this has been at its core all along a Clausewitzean war -- continuation of politics by other means.

The US intends to keep select military bases in Afghanistan, which it rebuilt and equipped at very considerable costs, anticipating a long-term military/intelligence deployment.

What we may expect is that Afghanistan and Pakistan will be a pivotal turf of America's Indo-Pacific strategy. The frontal assault recently on the CPEC by Alice Wells, acting assistant secretary of state for South and Central Asian affairs, and the unveiling of a new US strategy toward Central Asia by the White House are significant pointers in this direction.

Having said that, to be sure, a continued US involvement in Afghanistan is in the Taliban's interests too, which keenly sought all through the past quarter century, with active Pakistani support, an engagement with Washington to mutual benefit. That is why, Sirajuddin Haqqani's recent op-ed in The New York Times 'What We, the Taliban, Want' becomes an important signpost.

For the benefit of the uninitiated, the Haqqanis and the US security establishment go back a long way. The well-known journalist and academic Steve Coll has given a graphic account in his masterly work The Bin Ladens (2008) of how in the 1980s, Jalaluddin Haqqani (Sirajuddin's late father) was cultivated as a 'unilateral' asset of the CIA.

Jalaluddin was the only Mujahideen leader among the resistance commanders of the Afghan jihad whom Zia-ul Haq permitted the CIA to mentor directly.

The Americans were generous in funding Jalaluddin and, surely, when the time came, it was to him that the US would turn for help to protect Osama bin Laden, who was relocated from Yemen for building his own militia to fight Soviet-backed Afghanistan.

Sirajuddin's mainstreaming (with US acquiescence) is a guarantee for Pakistan that India's influence with Afghan security agencies will be terminated and its capacity to inflict damage on Pakistan's national security interests will be rolled back.

The US, arguably, has no quarrel with the legitimacy of Pakistan's security concerns in this regard.

Pakistan's main objectives are 3-fold: A friendly government in Kabul so that peace and tranquility prevails on the Durand Line; strategic depth vis-a-vis India; and a regional security paradigm where the US geo-strategy remains critically dependent on Pakistani cooperation for a foreseeable future.

Pakistan's trump card is that it is the only credible guarantor on the horizon who can reasonably assure the Western world that Afghanistan will not again become the revolving door for international terrorism. Trust Pakistan to play this card optimally.

The peace dividends are already appearing for Pakistan to garner. On Friday, February 28, the IMF announced the agreement to allow Pakistan to access $450 million out of a $6 billion bailout package. So much for the Paris-based Financial Action Task Force's grey lists and black lists of 'Non-Cooperative Countries or Territories'. 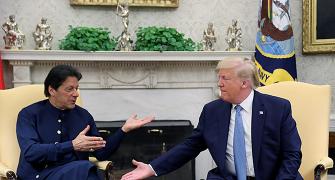 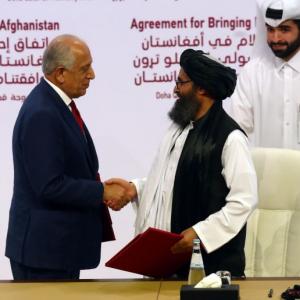 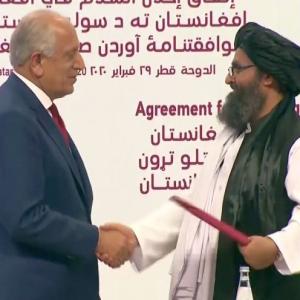