News
Business
Movies
Sports
Cricket
Get Ahead
Money Tips
Shopping
Sign in  |  Create a Rediffmail account
Rediff.com  » News » Some advice and a word of caution for the next Army Chief

'Pakistan thinks it is winning this low intensity conflict. It is a serious observation.'
'Half the battle is convincing your adversary that he cannot make headway.'
'A lot depends on how the internal professional management of the army and the handling of situations that are bound to rise sooner than later in his command, are done,' says Lieutenant General Syed Ata Hasnain (retd). 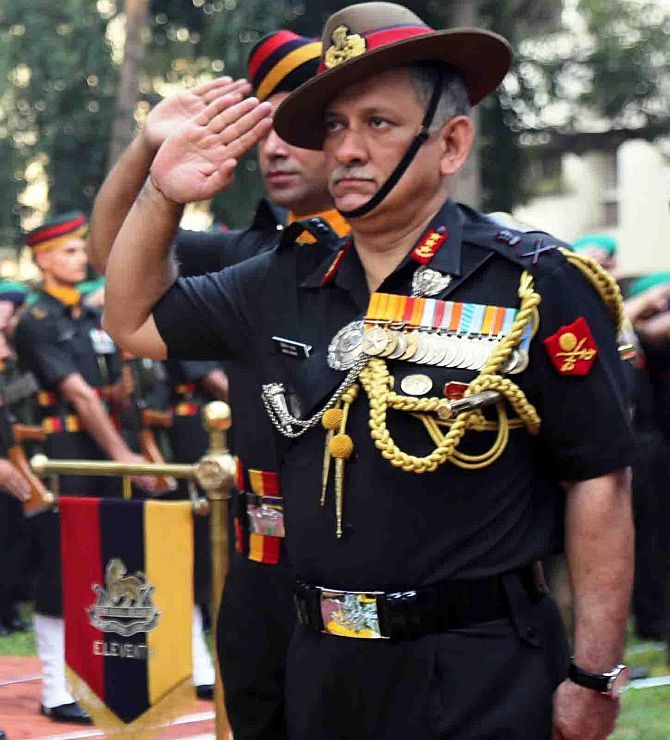 Lieutenant General Bipin Rawat, the current Vice Chief of the Army Staff, has been appointed the new army chief and will assume the appointment on General Dalbir Singh Suhag's superannuation on December 31, 2016.

His appointment is not without controversy because he supersedes two of his seniors to become the chief. In a tradition bound army which keeps itself completely outside political influence of any kind it is not easy to have such a situation where insinuations are flying around and allegations of even regional parochialism are being made.

This article will only briefly delve into the controversial part and explain the procedural aspects and the government's rationale. It will take no sides in this awkward game and focus primarily on the professional challenges before the new army chief.

The selection procedure for the army chief requires the shortlisting of the five senior most -- qualified officers -- and their record and dossiers are sent through the MoD to the Appointments Committee of the Cabinet.

The ACC scrutinises the records and makes the selection with additional inputs from vigilance and intelligence.

In the case of the army only once have we had supersession with General Arun S Vaidya being promoted over Lieutenant General S K Sinha.

Not an eyelid batted when Admiral R K Dhowan was promoted over Vice Admiral Shekhar Sinha in 2014.

It was under Vice Admiral Sinha's watch that the submarine INS Sindhurakshak met its doom, but there was nothing personally against him to merit his being overlooked. The UPA government did its cherry picking.

In the current context the shortlist was submitted to the ACC which then picked General Rawat as the next chief. No aspersions on the outstanding officers who have been overlooked. Yet, General Bipin Rawat clearly stands out if the government criterion was to have a hands on chief with operational experience in handling threats as perceived today.

The challenges before the new chief

To avoid making this too complex I have decided to limit this to only two domains for now and promise to expand this in a subsequent essay.

It starts with the thing for which General Rawat has probably been selected as the chief.

This relates to Jammu and Kashmir, counter-terrorism and the situation at the LoC.

Briefly, 2016 was a bad year from the perspective of India's security managers.

Pathankot, Uri and Nagrota, three major terror attacks showed Pakistan and its Deep State cocking a snook at India; the casualties were high.

Rear area security has suddenly taken a hit almost as bad as the first time we were targeted in 1999 by the so-called fidayeen (suicide attack) squads.

Garrisons are extremely vulnerable and in turn families, schools, clubs and officer messes.

The Kashmir valley has witnessed increasing alienation along with vigilantism and radicalism and currently only a tenuous peace based on dilution of stamina is holding.

The terrorist strength is low, but infiltration has been higher this year placing question marks on the efficacy of counter infiltration grid.

Lastly, the LoC is becoming the location where Pakistan plays its games when it has no other options.

Thus, the ceasefire of 2003 is known more by the breaches than the peace and tranquility it was to promote.

Lastly and most importantly, there appears in Pakistan a perception that it is winning the low intensity war against India without any timelines.

The problem for India's defence and security establishment increases with the expectation of muscularity of response due to the successful surgical strikes.

The army is obviously central to the entire strategy against Pakistan and the new army chief will be expected to evolve a winnable one.

The resources at his command are the maximum; it is a question of how they are harnessed.

I would attach highest priority to garrison security and LoC management for now even as the valley is quietly addressed.

General Rawat's ability to sit across the table and professionally advise the NSA, RM and the PM would be the clincher.

He must also be able to convince the J&K political and civil hierarchy to take professional advice from the army. It is already happening, but it must become institutionalised.

For garrison security a hard approach will have to be adopted as in 1999.

On both sides of the border/LoC there are new military hierarchies; both are experienced in handling security affairs related to Kashmir and both will take time to evolve new strategies.

General Rawat will have to have to work fast and win confidence of the security hierarchy.

As the prime mover in the entire national security matrix the army has to show the direction.

Lastly, on this aspect I would advise General Rawat to take stock of my words that Pakistan thinks it is winning this low intensity conflict. It is a serious observation.

Half the battle is convincing your adversary that he cannot make headway.

A lot depends on how the internal professional management of the army and the handling of situations that are bound to rise sooner than later in his command are done.

The internal management of the health of the army, as many former army chiefs have termed it, takes the next priority and much higher over all aspects of procurement, equipment, training and doctrine.

His own elevation is not being taken too kindly by a segment of the officer cadre.

It is being perceived as political interference or the stage is being set up for that. The fact that so many officers of the Gorkha Rifles are packed into the Army HQ does no good to perception.

General Rawat is a second generation 11 Gorkha Rifles officer and his predecessor, the current chief General Dalbir Singh too is from the 5 Gorkha Rifles.

My advice is that among the 'do-ables' a more equitable distribution of posts between Arms and Services must be done at the earliest.

His vice chief must be an officer from a different Arm. He has very little choice for this as both General Bakshi and General Hariz if they choose to serve on will surely not wish to be his number two.

If the two seniors decide to resign there will be more officers who will be elevated to army commander status and the choice may increase.

For very long the rivalry between the Armoured Corps and the Infantry has been a matter of friendly banter. I now sense this is becoming more serious than that.

It is the worst thing for the army if such light hearted rivalry gets reduced to professional competition of the worst kind.

That reduced the number of officers getting promoted from the Armored Corps and Mechanized Infantry to only the proportionate vacancies which accrued.

To top it, the distribution of vacancies of colonels then went in favour of the Infantry and Artillery on a skewed policy flowing out of the additional vacancies from the Ajay Vikram Singh Committee recommendations. Further description of this will only confuse readers no end.

Suffice to say that the Military Secretary Branch policies on promotion have been the cause of even a Supreme Court case.

It is difficult to take sides on this as there are pros and cons but these issues need early resolution.

It is little known that General Bipin Rawat handled the Military Secretary Branch (Policy) and is fully aware of issues which take army chiefs some time to grasp.

He should use the repertoire of his knowledge and experience to bring about a fair system of promotion; a system which must be perceived by all as fair and above parochialism.

The army appears to have tied itself in knots on some of these personnel related policies which definitely need a relook.

Gen Rawat will have to prove that he is his own man and that the promotion and appointment by the government was no favor to him.

To that extent his approach on dealing with Seventh Pay Commission issues and OROP will be under deep scrutiny by the veteran community which in today's world is an important opinion maker through social media.

On issues of equipment, procurement, doctrine including such aspects as theatrisation, welfare of jawans and financial management perhaps a separate piece will need to be written at an early date.

This ends with a note of caution. General Rawat's biggest handicap for some time will be the presence of his own batch mates and some senior to him in other Arms and Services. It does cause awkward moments and will need full maturity and firmness to handle.

My last advice to the new chief. Somewhere the happiness associated with the profession of arms appears to be dwindling.

It may well be worth mulling this and deciding how within constraints of political pressure and demands of operational situations can the Indian Army restore to its rank and file the concept of happiness it has always been known for.

Lieutenant General Syed Ata Hasnain (retd), a former General Officer Commanding of the Srinagar-based 15 Corps, is now associated as a senior analyst at the Vivekanand International Foundation and the Institute of Peace and Conflict Studies. 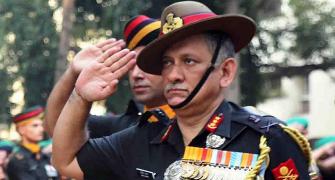