Should India be condemned to suffer vote bank politics forever?

We must make politics that uses demographic identity as a wedge, less and less relevant, says Shashi Shekhar.

That was Dr B R Ambedkar speaking in the Constituent Assembly on November 4, 1948 while introducing the Draft Constitution. In the same speech, Dr Ambedkar went on to lay out a vision for an assimilated India where identity based demographic faultlines cease to exist.

'To diehards who have developed a kind of fanaticism against minority protection I would like to say two things. One is that minorities are an explosive force which, if it erupts, can blow up the whole fabric of the State... the minorities in India have agreed to place their existence in the hands of the majority... they have loyally accepted the rule of the majority which is basically a communal majority and not a political majority.'

Dr Ambedkar's vision of an assimilated India where communal distinctions become irrelevant is neither utopian nor alien to India.

In fact this kind of fusion is what resulted in the way of life that we today broadly label as Hinduism. Without getting into a detailed discourse it would suffice to pin point the Intellectual Thought Leaders who made that fusion possible by reconciling ancient animosities through a compact that created a new way of life -- modern for its times.

Vashishtha who lost his son and Pulastya who lost his many kinsmen found it within themselves to forge that compact. A testimony to that compact which is the foremost of Puranas -- the Vishnu Purana that has Vashishtha's grandson Parashara overcoming his victimhood (for his father's murder) to receive insights from Pulastya.

The process of assimilation and fusion over the years in this way of life is best appreciated by the vast pantheon of symbols and icons where there is always room for the modern and the ancient.

Unfortunately over the past few decades no serious and sincere attempts have been made to accomplish such an assimilation or fusion. While one has seen many government initiatives in the name of 'national integration' they have been superficial at best. The 'National Integration Council' has become a vestige, as was exemplified by charade that played out in Delhi last weekend.

If there is one lesson we can take from that charade it is that government cannot be the vehicle to deal with what is essentially a socio-cultural phenomenon. This, however, puts us in a quandary for identity based demographic faultlines have been the basis for a perverse culture of politics.

Should India be condemned to suffer vote bank politics forever?

We lament corruption, yet we fail to recognise that when immoral politics are accorded moral sanction using identity as a wedge, such corruption is an inevitable outcome.

Make no mistake -- this week's orders by the Supreme Court on the 2002 Gujarat riots, will be twisted to pursue even greater fear mongering, in upcoming state elections -- especially the all important Uttar Pradesh assembly election.

The moment calls for creative and imaginative political moves to ensure the process of reconciliation takes a visible and concrete shape. A dialogue must begin on why the Indian Muslim community must always condemn itself to voting out of fear. A dialogue must also begin on why the Indian Muslim community, in doing so, must continue to hurt its economic interests while patronising vested interests who use that fear as a wedge to sustain themselves politically.

Truth and Reconciliation have become a buzzword lately in a different part of the country. But as we have seen with the 'National Integration Council', the effectiveness of such a process is highly questionable if government is seen to be the vehicle. Ultimately this is about leadership by personal example and social change where government has a limited or no role at all.

Let me close with an anecdote from a visit to a Parsi family during which I discovered Ganesha and Zarathustra sitting next to each other in a sacred corner in that home. There on that sacred personal bench was assimilation and fusion blurring a 4,000-year-old civilisation faultline.

In keeping with our ancient ethos of assimilation and fusion through inclusivity we must heed Ambedkar's words so the distinction between Majority and Minority ceases to exist. We can do so with a small beginning that costs nothing.

Let us dedicate an empty corner in our own private sacred bench for a formless god. Perhaps that may give sincerity to this mission to reconcile our true feelings -- Sadbhavana. 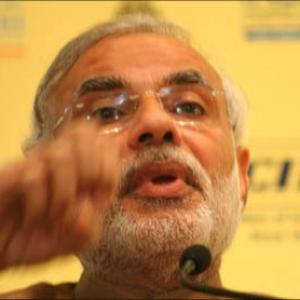 'Hate campaigners against Modi have lost'

Should Modi's burden be India's too?