Awful religious practices need to be abolished. But by social and political reformers, not the courts, argues Shekhar Gupta.
Illustration: Uttam Ghosh/Rediff.com 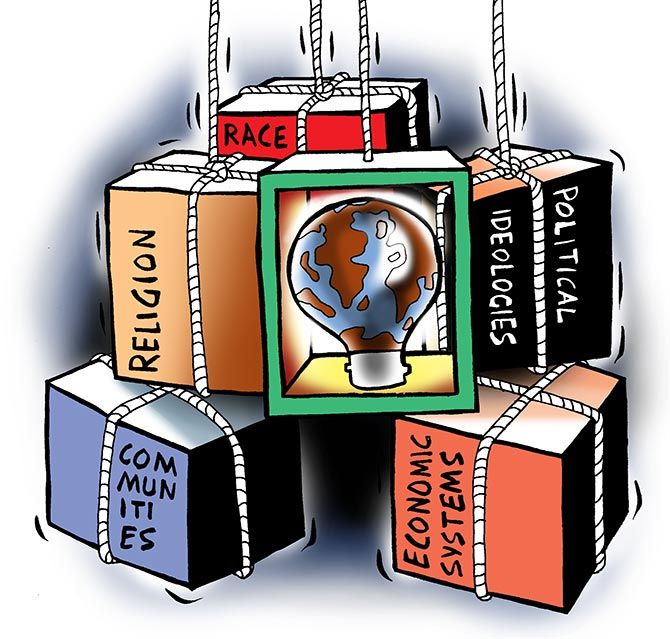 The Hindutva leaders in Kerala must be daft. Or gifted with a wickedly brilliant sense of humour. Why else would they protest against the Supreme Court's order to allow the entry of all women, including those in the menstruating age of 10 to 50 years, into the Sabarimala temple of Lord Ayyappa, the son of Lord Shiva and Mohini, the female manifestation of Lord Vishnu? Instead, they should be sending the judges bouquets and blessings.

Because, with one 4-1 Constitution Bench order, however well-meaning, the Supreme Court has gifted Hindutva something two generations of RSS-Jan Sangh-BJP leaders had failed at: Creating a base, a political justification to grow in Kerala. This court has brought them to their last frontier.

The last frontier, because in Tamil Nadu, any of the two contending parties, the DMK and AIADMK, can partner the BJP in a coalition.

The RSS has been fighting for a foot-hold, and its activists have been caught in a murderous blood-feud with those of the Left. Yet, barring the constituency of Thiruvananthapuram, where it came close to surprising Shashi Tharoor of the Congress, it was unable to build a Hindu vote.

This court order has given Kerala, and the RSS/BJP, their first issue over Hindu sentiment. Can they exploit it to build a mass appeal, or will the redoubtable Malayali scepticism see through it? You will need to talk to people more knowledgeable about Kerala's unique politics.

What you can see, however, is that the Hindutva forces have seen an opening. The RSS and its affiliates have rallied women workers from all over the region and beyond -- not just Kerala -- to build this furious protest in Sabarimala.

If many of these women seem to speak Hindi with Sanskritised purity and diction, you know they have been schooled in the RSS system. They are in Kerala in force now, and why should they not be there!

Politics and democratic competition can't just be confined to one Left and the other to the left of this Left. Welcome the Hindu Right in Kerala! And thank you so very much, Your Libertarian Lordships!

Sabarimala is a lesson in how unintended consequences can follow an intervention by an all-powerful institution which clinically applies principles of the law and Constitution -- or as it interprets them -- even to issues of faith.

Such an application would have to presume that faith, any faith, is rational. That's a tough one.

Is the idea of divine avatars rational?

Or hundreds of manifestations of the same God or Goddess?

It can get so complex that even the handlers of Prime Minister Narendra Damodardas Modi's social media end up describing Kali as Goddess Durga. Of course, She won't mind, and, in any case, it is the same Goddess.

But can you produce a peer-reviewed research paper backing the idea of multiple manifestations of any divine figure? Or virgin birth? Or a God, namely Ayyappa, born out of the union of Shiva and Mohini as the female manifestation of Vishnu?

Will a court ask for evidence if the Holy Quran was actually Allah's word to the Prophet?

Or the many tribal faiths, animism, worship of the sun and the moon, the customs of sacrifice?

We are a complex society where countless faiths, beliefs and customs co-exist, where somebody paints a little lime or saffron on a tree or a rock, or puts a few asbestos sheets over an abandoned grave, and countless start praying to it.

Will the courts entertain questions about these?

Can a Christian woman approach the Supreme Court, asking it to order the Catholic faith to give women equal rights and positions in their clergy? A UPSC-style body to select Christian priests?

Can a Hindu woman ask that the judges order the RSS that women should be admitted to its highest all-male councils? It will be wonderful to see a woman heading the RSS, a 'Sarsanghchalika', and, who knows, it may happen someday. It would never happen on any court's orders -- you can be sure.

The reason we are able to co-exist, mostly peacefully, is that as a people, we Indians let our neighbours be. And as a State, by and large, we have been minimally invasive on issues of faith.

The Hindu Code Bill followed enormous debate and still remains contentious. I say with great humility that the reform in Hindu personal laws and customs that Jawaharlal Nehru brought in through parliamentary debate and majority, the finest Supreme Court benches over generations would not have been able to.

The Shah Bano judgement was overturned by Parliament. The same court has now proclaimed triple talaq illegal and because the politics of the ruling party today is different, it is making it a criminal offence.

But do you really see police in our various states entering households, arresting and prosecuting people? The mayhem it will cause in an already insecure community that finds itself under siege?

Triple talaq is a terrible, medieval idea. Many Islamic countries and societies have dumped it. Indian Muslims too should do it. But the impetus must come from reform within, not from police armed with criminal law sanctified by a 'liberal' court.

We understand the justification behind the order on Sabarimala, that this was about individual liberty.

How can you deny women the right to pray to their favourite deity just because they are in the fertile age group and may distract the Virgin Him with their sexuality?

Good point, and you struck a blow for equality, to glowing praises from editorialists and prime-time, rent-a-quote activists who have meanwhile moved on to the next cause.

Is there one research paper, or a public debate on unimplementable court orders? We've long had one oft-repeated court order, making helmets compulsory for all women riding two-wheelers, irrespective of the faith, again overruled in the face of protests by Sikhs.

On the quiet, however, more and more sensible Sikh women are using helmets and mobs aren't stopping them.

I do not believe you will find Gul Panag, who loves biking, ever without a good helmet. She didn't need a court order, nor does she need to bother about conservative prohibitions. More and more Sikh women are doing it, out of good sense, not compulsion.

The court is now dealing with female genital mutilation (FGM) among some Muslim sects. The court can outlaw it, but can they implement that order?

I promise you that even the BJP-run states of Maharashtra and Gujarat, where most of this sect lives, will refuse to get their police prosecute people for FGM. You know what, politicians are sometimes smarter than judges.

Even Modi and his government, so outraged over triple talaq, are mum on FGM. The PM actively courts the Bohri Syedna and his clergy. Remember also, that the Supreme Court stayed its own 40-year-old order on a Shia-Sunni dispute over a Varanasi graveyard because the state government said it was unimplementable.

The danger with an unconventional view on any contentious issue anything other than the missionary position (sorry about this!) on a principle of political correctness is bound to be misconstrued. So, I must, must idiot-proof this again.

Should women not be allowed in Sabarimala? My answer is, they absolutely must be allowed.

Should Sikh women go vrooooming around on motorcycles without helmets? The answer is a firm 'no'.

Triple talaq? It is awful injustice to Muslim women, just as FGM is an abomination?

All these need to go. But leave it to social and political reformers from within.

Can you fix it all, purely through judicial intervention? My answer would still be a respectful, but determined, 'no'. Unintended consequences will follow.

Like the court, in the quest for the perfect world ushering, instead, the BJP into Kerala, with a cause that is as political as it might be moral or spiritual. 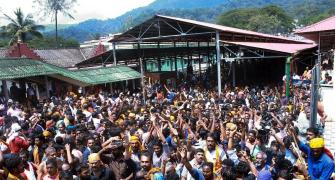