Will he take Modi's 'sab ka saath, sab ka vikas' route? Or will he turn UP into Egypt under Morsi, asks Syed Firdaus Ashraf. 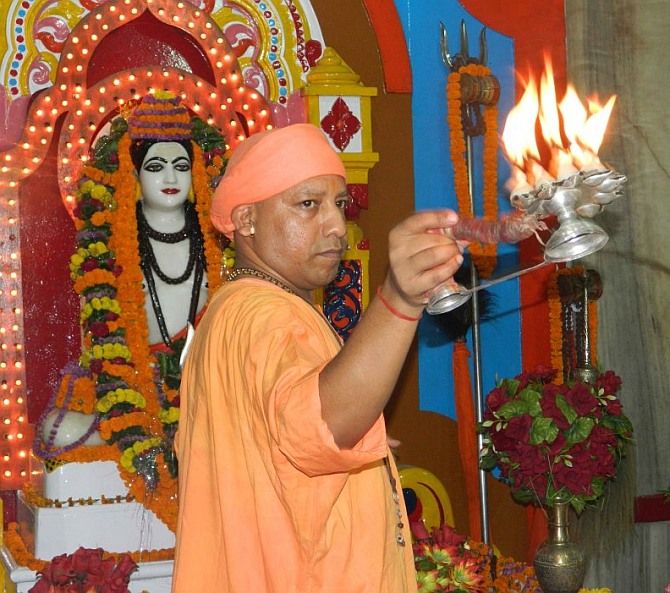 When Yogi Adityanath was sworn in as Uttar Pradesh chief minister on Sunday many secularists and Muslims in my circle exclaimed, "This is it, this is the end of secular India!"

Some Muslim friends called it the end of the Ganga-Jamuna tehzeeb (composite culture) they were brought up in.

Another friend commented that the Muslim vote has become irrelevant in India if you are voting against the Bharatiya Janata Party or Prime Minister Narendra Modi.

Social media was abuzz with videos of Adityanath's speech in which he said if a Muslim marries one Hindu woman and converts her, Hindu men will marry 100 Muslim women and convert them.

According to his election affidavit filed in 2014, the UP chief minister has been charged under the Indian Penal Code's Section 435 (mischief by fire or explosive substance), Section 506 (criminal intimidation), Section 307 (attempt to murder), three charges related to punishment for rioting under Section 147, Section 148 (rioting, armed with deadly weapon) and two charges under Section 297 (trespassing on burial places).

Given this long list of 'accomplishments,' a secular friend asked if it was right to appoint such a man to a high Constitutional position.

"It is the will of the people of UP that they want a BJP government to lead them," I replied. "And it is the BJP that decided that Yogi must lead them. So there is no option for Muslims and secularists but to accept him as chief minister."

"Oh, so you have sold your soul to Yogi," my friend taunted me.

I didn't know how to respond to my friend's taunt, but a lecture I attended about Africa some months ago came to mind.

Muslims and secularists confront three possibilities of how things can unfold:

a. The Algerian way (not possible).

b. The Morsi way (possible).

When elections were held after three decades in Algeria in the early 1990s, it was clear that the Islamic Salvation Front would win the people's mandate.

Unhappy with the outcome, the Algerian military stalled the electoral process, thwarted the Islamists, and triggered off a brutal civil war.

Closer home, when the Muslim United Front complained in 1987 that the Jammu and Kashmir state election was rigged by Farooq Abdullah's National Conference and its ally, Rajiv Gandhi's Congress party, its protests went unheeded.

Disillusioned by the rigged election, one MUF candidate, Syed Mohammed Yusuf Shah, crossed over to Pakistan, took the name Syed Salahuddin, and formed the terrorist organisation Hizbul Mujahideen to wage war against India.

Recalling all this is merely by way of background. I am sure no one in UP would ever tread this path nor is it a viable option for anyone. Violence is abhorrent and can never be accepted.

Which takes me to the second possibility.

Will the UP chief minister do what Mohammed Morsi did in Egypt?

In January 2011, Egyptian President Hosni Mubarak was forced out of power in the wake of the Arab Spring.

In a subsequent election, the Muslim Brotherhood and its leader Morsi were elected to rule Egypt.

Morsi soon started implementing divisive policies, tinkered with the Egyptian constitution to give it an Islamist slant.

Angered by the Muslim Brotherhood's antics, General Abdel Fatah el-Sisi and the Egyptian army forced Morsi out of office, jailed him and the Brotherhood's top leadership where they stay till this day.

I asked a friend, then working in Egypt, why Morsi wanted to change the constitution.

"All fundamentalist parties are thick skinned," my friend explained, "they will never compromise on their ideology."

"Even if that ideology results in destruction," he added. "And this is exactly what Morsi did."

Adityanath, like Morsi, has ridden to power in the wake of a provocative and divisive election campaign.

'Love jihad,' 'kabristan versus shamshan,' 'Hindu exodus,' 'triple talaq' were issues the BJP highlighted in the UP election.

The first and most divisive decision Adityanath could take is shut down all mechanised slaughter houses in UP as the BJP promised before the election.

If that step is taken, it would lead to thousands of job losses, affecting UP's economy.

Meat exports would suffer and many businessmen would go bankrupt.

Will Adityanath take Modi's 'Sab ka saath, sab ka vikas' route? Or will he turn UP into an Egypt under Morsi?

We will know in a few weeks from know. Until then, both secularists and Muslims need to accept the people's mandate for what it is. 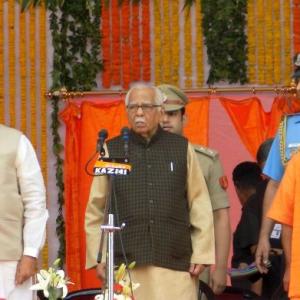