Although the Malabar is a routine exercise which has been carried out for several years now, security experts attach a lot of traction to it in view of China's assertive behaviour in the South China Sea, observes Rup Narayan Das. 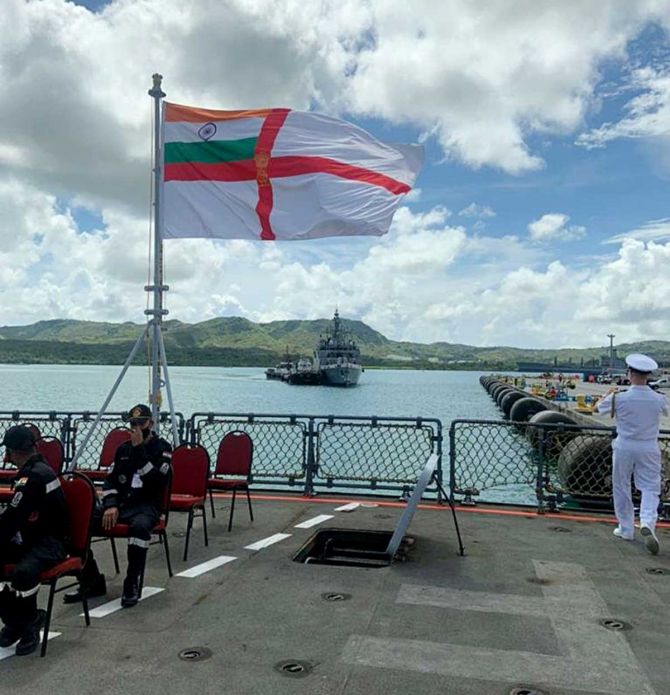 IMAGE: INS Shivalik and INS Kadmatt arrive in Guam to participate in MALABAR-21, the annual exercise among the navies of Australia, India, Japan and the United States, August 22, 2021. Photograph: ANI Photo

Yet another edition of the Malabar naval exercise comprising the Quad countries -- India, the USA, Japan and Australia -- kick starts from Thursday, August 26 in Guam, an American island territory in the Western Pacific. This will be the 21st exercise, which started at a bilateral level between India and the USA in 1992.

On August 12, senior officials from the Quad nations held talks on advancing practical cooperation to achieve the goals of a free and open Indo-Pacific, an euphemism to deal with China's belligerence.

Although the Malabar is a routine exercise which has been carried out for several years now, strategic and security experts attach a lot of traction to it in view of China's assertive behaviour in the South China Sea, where India has also invested in hydrocarbon exploration in Vietnamese waters.

The India-China military standoff in Ladakh has also emboldened India's resolve to shed its earlier hesitation to give a further impetus to the Quad and the Malabar naval exercise.

China's Foreign Minister Wang Yi had scoffed at the Quad ridiculing it as 'building of small circles in the name of multilateralism which was in fact group politics.' 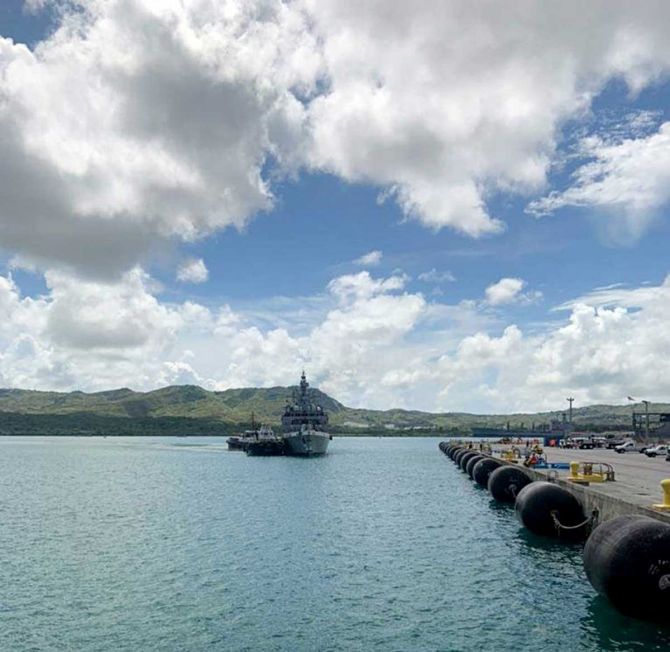 Simultaneously, India is also carrying out naval exercises with littoral countries of the Ocean Rim including Vietnam, the Philippines, Singapore and Australia at the bilateral level.

India has regular naval deployments with the Singapore navy under the nomenclature SIMBEX, Samudra Shakti with Indonesia, and AUS-INDEX with Australia. Between India and Japan there is a bilateral exercise called JIMEX.

These deployments and exercises are aimed at enhancing India's profile in the sea-lanes and highlights India's peaceful presence and solidarity with littoral countries in India's extended neighbourhood in terms of a maritime order.

In pursuit of India's Act East Policy and to enhance military cooperation with friendly countries, a task force of the Indian Navy's Eastern Fleet has been deployed in South East Asia, the South China Sea and the Western Pacific since early August.

The Indian Navy undertakes regular deployments to friendly countries in the Indian Ocean and the Pacific regions in furtherance of Modi's initiative of Security and Growth for All in the Region (SAGAR). These maritime initiatives enhance synergy and coordination between the Indian Navy and friendly countries based on common maritime interests and commitment towards freedom of navigation at the sea.

Strategic and security experts attach great significance to India's defence cooperation and naval engagement with Vietnam in particular in view of China's assertive behaviour in the South China Sea.

As a part of India's naval engagement with Vietnam, early this month, the Indian Navy deployed a naval task group comprising frontline warships for a two month voyage.

The two ships -- INS Ranvijay and INS Kora deployed in Cam Ran Bay since August 15, are part of the task group. Regular interaction between the Indian Navy and the Vietnamese navy over the years have enhanced their inter-operability and adaptability.

The Malabar exercise and India's deployment of naval assets in the waters of friendly littoral countries should not be and need not be seen as aimed at targeting any specific country.

What is important is maritime security which has to be protected and promoted.

India has always advocated a free, open and inclusive Indo-Pacific and a rule based maritime international border. The Malabar exercise is perceived by strategic observers as a demonstration of collective resolve to support an open and prosperous Indo-Pacific.

Modi in his address at the UN Security Council very thoughtfully emphasised that our sea resources are the lifeline of international trade and that the biggest thing is that these oceans are very important for the future of our planet.

At a time when China is pitted against the coalition of democracies under the rubric of the Quad, one is reminded of the Samudramanthan of Indian mythology when Bali (read China) gained control over the universe (the South China Sea); and the Devas (Quad) sought the help of Lord Vishnu (USA), who advised them to treat the Asuras led by Bali in a a diplomatic manner and Vishnu offered to obtain the nectar himself.

New Delhi should envisage the emergence of such a scenario in its calculus of its extent of insolvent with the Quad. 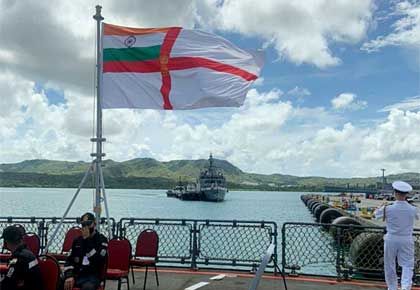 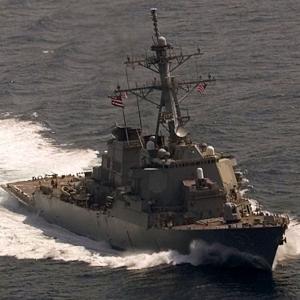