By Saisuresh Sivaswamy
January 20, 2011 12:05 IST
All those castigating the government for a feeble reshuffle are missing the point. Which is that the exercise was not meant to be anything more than a message, says Saisuresh Sivaswamy.

Social networking sites have their use. They give you a sense of public sentiment over any hot topic. But being majoritarian in nature, the debate often swings the way of those who speak the loudest. Listen to them, but not necessarily to take them as the vox populi.

If you don't do that, on hearing the Internet chatter you will tend to believe that the United Progressive Alliance government is rudderless, even clueless that it is rudderless, and lacks a strategy -- all of which is proven by the reshuffle, inasmuch as that word applies to Wednesday's portfolio reallocation exercise by the prime minister.

It can be no one's case that UPA II is going about its task bright as a button, and it certainly isn't mine either. The thumb of rule for governments is that their honeymoon phase lasts for one or two years, after which it descends into a holding operation till the next election is called or forced on it.

The UPA II is unique in that it almost never had a honeymoon period with the electorate -- which is a tragedy, considering the enormous goodwill that propelled it into office.

To know a government is to know its political compulsions. To know a Cabinet shakeup is to know the prime minister.

We have known the UPA II for one-and-a-half years now, and its political compulsions were sought to be given a sheen recently by Rahul Gandhi, the Congress general secretary who is anything but that. Coalition governments have their limitations, he said, in a sorry attempt at deflection of the all-round criticism UPA II has been subject to.

For instance, following the Supreme Court's observations on various issues involving the government, which have become a sort of a daily sermon, are an eye-opener. Never before has a government in India been lectured and harangued by the apex court in so regular a manner, which makes you wonder, just who is in charge?

That, in my opinion, is the problem behind UPA II. Things were okay with UPA I, because it was a surprise victory even for the Congress. The prime minister and his political superior, Congress President Sonia Gandhi, hit upon a modus vivendi that didn't cut too much into each other's space. So while he could focus on governance, she could focus on the party.

But things seem to have changed with the 2009 electoral victory. The Congress, surprise surprise, improved on its previous Lok Sabha tally, and the party bosses suddenly seem to have woken up to the fact that maybe, just maybe, it could improve further and reach a position where it would form the government on its own.

Inherent in that belief is that it would see the return of the Gandhi family to the top political job in the country.

The problems of UPA II, then, stem from the classic case of party versus government. It was all hunky-dory when the party had less numbers and therefore was less assertive. This doesn't apply only to the government -- it applies in equal measure to the Congress's relations with its allies too. Hence the uneasy equations with its various partners, from the Dravida Munnetra Kazhagam to the Nationalist Congress Party to the Trinamool Congress.

Indira Gandhi foresaw this and wore two hats, of prime minister and party president. So far Sonia Gandhi has resisted the impulse, choosing to be the power behind the throne instead. The irony cannot escape her, the prime minister or us: Power can have only one source. When there are more, as it does now, it causes confusion at best and demoralisation at worst.

And the UPA II is at its worst phase now. If it does well, Sonia Gandhi gets the credit; if it fails, it will be laid at Manmohan Singh's door. The soft-spoken prime minister was aware of this when he agreed to take up the job which had no other claimant. And Wednesday's reallocation of portfolio reflects his style of operation.

I am not one of those fortunate enough to be on familiar terms with the prime minister or his office, that's a privilege reserved for a few for whom the downside was revealed recently in tapped telephone conversations. I have encountered the incumbent only twice, both on overseas visits he made. During these visits, contrary to public perception that the media gets to wine and dine with the high and mighty, all you get are a few minutes of interacting up close with the prime minister.

But these are precious minutes, where you get to observe, and even confirm your perceptions. From what I believe and know, this prime minister is not given to pomp and show -- not because he knows his job was given to him -- but because that is simply not his style. So no overt displays of either style, or authority. Why use a howitzer when a kirpan is enough, that could easily be his motto.

So all those castigating the government for a feeble reshuffle are missing the point. Which is that the exercise was not meant to be anything more than a message. And the recipients for whom it was intended, have all got it. Just a few examples will suffice:

Sharad Pawar has retained agriculture, but has lost the crucial civil supplies ministry. Plus, his foe Vilasrao Deshmukh is now in his trajectory with rural development portfolio.

His party colleague Praful Patel has been given a leg up, but only after paying the price: Civil aviation.

Kamal Nath has been moved out of highways to urban development.

The Congress party's interests have been kept in mind, too, with Sriprakash Jaiswal and Salman Khurshid, both from Uttar Pradesh, getting promoted to Cabinet rank.

You can always ask why did the prime minister not go the whole hog if his intention was to clean up his administration? Why have laggards and looters been allowed to remain?

It is for those who refuse to read the signs that Manmohan Singh issued a statement later that a more expansive exercise will be done after the Budget session of Parliament.

Why after the Budget session?

For the government, clearly, the first imperative is to tide over that period -- already facing the combined Opposition ire and the threat of Jaganmohan Reddy's MPs pulling out and endangering the government, neither wisdom nor survival instinct advise the opening of a Third Front of disgruntled ministers by sacking them.

This, to me, fits in with the prime minister's style. Another leader from another era I think said it better: Speak softly and carry a big stick. That's what I think Dr Singh has done. 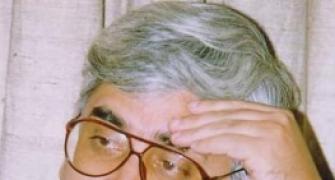 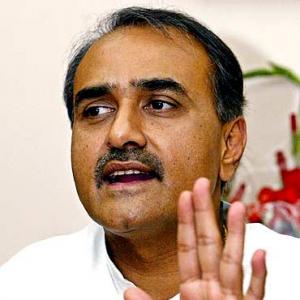