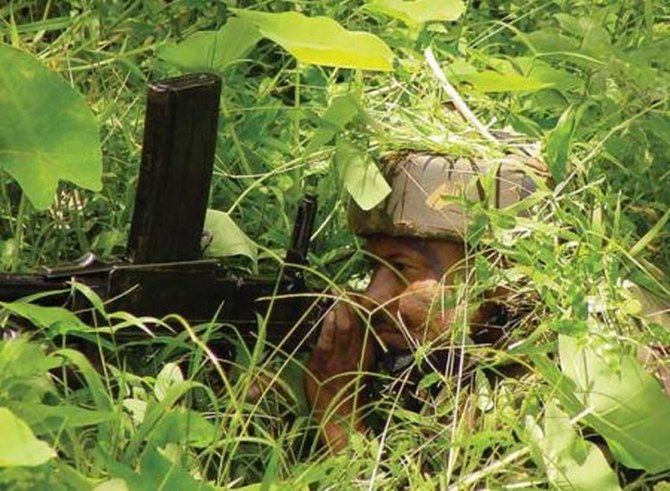 Veteran journalist and columnist Praful Bidwai passed away in Amsterdam on Wednesday. A regular columnist for Rediff.com, Bidwai's has always been a voice against extremism and communalism. Throughout his long career as a journalist, Bidwai did not hesitate to articulate his concern over the creeping forces of intolerance and communalism.

In his last column for Rediff.com, he joins issues with those lauding India's covert operation against Naga rebels based in Myanmarese territory.

We will miss his writings. The debate over the June 9 raids by the Indian Army’s special forces unit against two northeastern insurgent groups on Myanmarese territory has produced two main reactions.

The first reaction, from Prime Minister Narendra Modi’s diehard supporters, is triumphalist and holds that the retaliatory operation’s ‘great’ success against the National Socialist Council of Nagaland-Khaplang rebels must be trumpeted.

The second reaction defends the present covert operation, but believes that publicising such operations is unwise, even self-defeating.

The proponents of the first view defend bellicose rhetoric and hashtags such as #ManipurRevenge and #56inRocks by junior information minister Rajyavardhan Rathore, who wanted to tell all countries, including Pakistan, that India can and will strike ‘at a place and at a time of our choosing’.

They hold that it was necessary to make the operation’s details public -- against strict military rules -- because India needed to send out a signal not just to the NSCN-K, but to all the ‘hostile elements in the neighbourhood’, that its national security approach has undergone a sea-change under its new ‘56-inch-chest’ leader, who wants to end ‘a thousand years of servility masquerading as civility’.

This argument is puerile. It comprehensively misunderstands both history -- India as we know, was not one nation for a thousand years -- and contemporary geopolitics.

Confident and prudent nation-States don’t casually violate their neighbouring States’ sovereign borders; they know that healthy relations with their neighbours are key to their own security.

The ‘hot pursuit’ doctrine has little validity in international law. It originated in efforts to control pirates/smugglers. If they commit a crime in your territorial waters, you can chase them into the high seas, which are normally free to all vessels. Its extension to land has been generally rejected.

‘Self-defence’ is a more plausible argument, but it too has been carried to an absurd extreme by the United States in declaring war on Afghanistan after the September 2001 attacks.

After 18 of India’s Dogra Regiment troops were killed on June 4 by a coalition of Khaplang-led separatists in Manipur, India could have conducted a joint operation against such guerrillas with the Myanmar army, with which it had good relations even during the long years of Aung Sang Suu Kyi’s detention.

India entered into ceasefire agreements with both the Isak Swu-Thuingaleng Muivah and Khaplang factions of the NSCN respectively in 1997 and 2001. It had ample opportunity to renew the ceasefire with the Myanmar-based Khaplang when it ended in March.

Alternatively, it could have roped in Naga civil society groups to persuade Khaplang to explore peace with India. Nagaland Chief Minister T R Zeliang has said such groups have the requisite credibility. Indian intelligence agencies did neither.

They failed to keep the Manipur and Nagaland governments in the loop, and ignored the new emerging coalition between Khaplang, the United Liberation Front of Assam’s Paresh Barua, and the tiny Meitei and Bodo factions, which launched the June 4 attack.

India’s retaliation was hastily conceived. It chose to attack rebel bases close to the border for ‘political’ reasons -- and not because they harboured a large number of insurgents. Contradictory claims were made about the number killed: 20, 50, even 100; but only seven bodies were recovered, according to The Indian Express.

The main reason why India didn’t even try to do so derives from the Modi government’s jingoism and its domination by super-hawks such as National Security Adviser A K Doval and Defence Minister Manohar Parrikar, who believe in devious means and cloak-and-dagger methods -- eg, ‘neutralising’ one terrorist with another terrorist.

Doval, a former Intelligence Bureau director, is a firm believer in coercion, not diplomacy, to resolve external security problems and domestic ethnic conflicts. He’s on record as saying that peaceful co-existence between India and Pakistan is virtually impossible.

Imagine the implications of this, considering that both States are nuclear-armed, with such close geographical proximity between them that a nuclear exchange would lead to large-scale devastation and irreversible climatic change in the region.

As South Asia’s post-Pokharan-II history suggests, escalation of conventional war rhetoric has a real potential to lead to nuclear sabre-rattling, with consequences too horrifying to contemplate.

The second, seemingly more sober, reaction argues against chest-thumping jingoism. It recommends discretion: let covert operations remain covert and speak for themselves; don’t talk about them and reveal your hand to your adversaries.

Yet, it fails to understand that protracted conflicts aren’t decided by covert operations, but need strategic foresight and sustained, astute diplomacy. So it holds that a modern State must practise deception, skulduggery and lawless conduct in exceptional circumstances.

Implicit here are three assumptions: first; covert operations are usually successful in neutralising asymmetrical threats like those from insurgents or terrorists; second, it’s legitimate for States to use extreme and inhuman methods such as summary execution in special circumstances; and third, democratic States know where to draw the line; once the moment of crisis has passed, they can return to normal political and social negotiation processes.

All three assumptions are open to question. Take India’s own experience. In the 1950s, India collaborated with the Central Intelligence Agency in training and arming Tibetan guerrillas to instigate the so-called Khampa Rebellion against China. The CIA abandoned the operation after sacrificing thousands of Tibetans. India earned China’s hostility, with dire consequences, which were revealed in 1962.

An even more dangerous CIA-sponsored covert operation was launched in 1965 to place espionage equipment energised by a plutonium power-pack on the Nanda Devi peak to monitor Chinese nuclear activities. An avalanche prevented its placement. It has remained untraceable, raising fears of radioactive contamination of glaciers, and eventually, the Ganga.

In 1987, India in another covert operation air-dropped ‘humanitarian’ aid (food and medicines) in northern Sri Lanka, and imposed the India-Sri Lanka accord on Colombo, and later on the Liberation Tigers of Tamil Eelam.

This drew India into a terrible ‘peace-keeping’ misadventure, in which it lost 1,200 soldiers -- more than in all other wars cumulatively -- and invited the LTTE’s revenge through Rajiv Gandhi’s assassination.

There are countless instances of highly sophisticated Western covert operations having gone sour or become ineffective, including drone-bombing in Afghanistan, Iraq and Syria.

Secondly, it is extremely difficult to draw the dividing line between military attacks calculated to kill, and methods like torture, hostage-taking and arbitrary executions/fake encounters.

They are always rationalised in the name of ‘compulsion’, necessity to ‘deter’ further attacks, choosing ‘the lesser evil’-- all as one-time exceptions. They together form a slippery ethical slope, which permits increasingly brutal acts; ultimately, all limits collapse.

If torturing one person saves a hundred lives, wouldn’t that be justified? This argument may seem attractive, but it’s dangerously wrong. Not only does it permit the violation of a person’s fundamental right to life; it often produces unreliable or false results. People lie only to escape torture; that might lead to yet more gratuitous violence by security agencies.

If a democratic State indulges in gross human rights violations, it undermines its own claim to following legality or a higher principle; it loses popular legitimacy. That’s why ‘fake’ encounters end up causing more resentment and adding to the cesspool of discontent and grievances that fuel militancy and extremism.

That has happened for decades in the Kashmir Valley and the northeast.

In Mizoram, the Indian State created Malaya-Vietnam-style ‘strategic hamlets’ by grouping villages under the threat of the gun. In Nagaland, Manipur and Assam, it waged war on its own people. This bred more resentment and fuelled militancy.

The more ruthlessly the militancy was repressed, the greater were the civilian casualties. Hundreds of civilians were dehumanised through torture, forced labour and arbitrary arrest in ‘Operation Loktak’ in 1999 in Manipur, declared ‘successful’.

Finally, the State doesn’t know when to stop. The Armed Forces Special Powers Act was introduced in 1958 as a ‘temporary’ measure. It gives impunity to officers who kill anyone suspected of the intention to break the law. It continues to operate in Kashmir and most Northeastern states barring Tripura, including Assam (except Guwahati).

The Indian police is responsible for an annual average of 1,400 custodial deaths, but still wants more powers through laws such as the Terrorist and Disruptive Activities (Prevention) Act, Prevention of Terrorism Act and the Unlawful Activities Prevention Act -- despite a conviction rate of one percent under the TADA.

The Myanmar raid forms part of the same vile pattern. This must end. For real long-term peace, India must talk to its alienated citizens in good faith and without coercion. 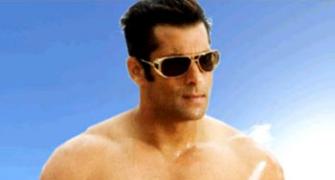 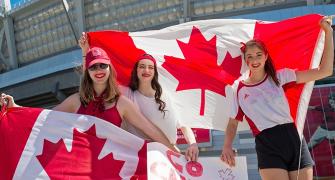 Canada focussed... no time for fun 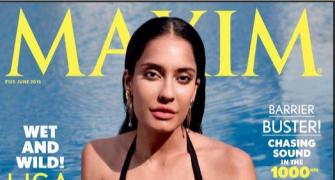 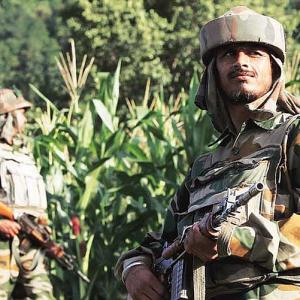 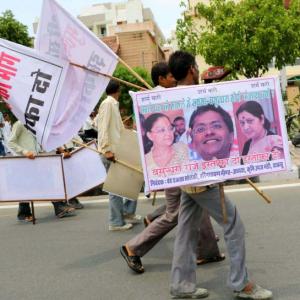 How Modigate has transformed the Modi sarkar into UPA III