Patels and the politics of 'sensitive areas'

'When you read that for the first time, areas in Gujarat dominated by Patidars/Patels have been declared 'sensitive' for the civic polls that were held this week, you sit up and take note,' says Jyoti Punwani. 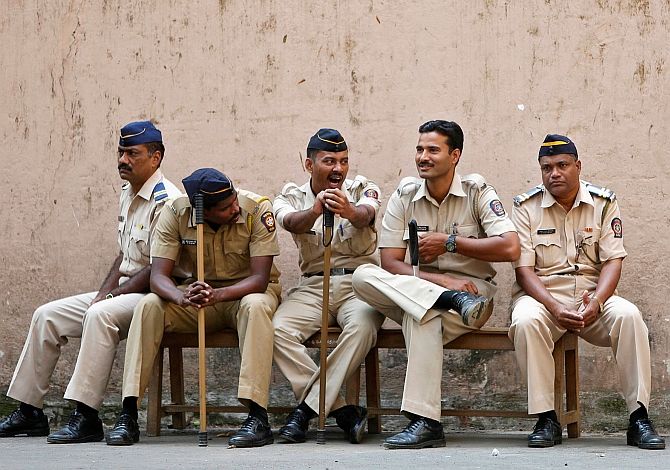 There cannot have been one polling day in history without the phrase 'Bandobast has been spruced up in sensitive areas' being on page one of every newspaper. Everyone knows what areas those are, even without having to read the report.

At any rate the stock photograph -- of cops standing in front of a mosque -- makes it obvious that where Muslims live is by definition sensitive in our police's dictionary.

So when you read that for the first time, areas in Gujarat dominated by Patidars/Patels have been declared 'sensitive' for the civic polls that were held this week, you sit up and take note.

Gujarat's Patels have always been staunch BJP supporters. In the many riots that the state, specially Ahmedabad and Baroda, have seen, some Patels fought against Muslims and Dalits, with the BJP (the Jan Sangh earlier) on their side. Some Patels have been extremely violent, not just against Muslims and Dalits, but also against the police, specially in the anti-reservation agitations of 1981 and 1985.

Yet, the 2015 civic polls is the first occasion that Patel areas have been declared 'sensitive'.

The situation is similar in Mumbai. For decades, police bandobast has been 'spruced up' in Mohammed Ali Road, Nagpada, Govandi, Kurla... all Muslim areas, not just on polling days, but during festivals too, specially when important religious occasions of both Hindus and Muslims have fallen on dates close to each other.

In one unforgettable photograph after the Mumbai 1992-1993 riots, Muslims were seen offering namaaz on the road ringed by rifle-bearing policemen -- almost like an open-air jail.

Namaaz itself has always been seen as a 'sensitive' practice for the Mumbai police. This came out clearly in the affidavits filed by them before the Srikrishna Commission set up to investigate the 1992-1993 riots. 'Bandobast was heightened for Friday afternoon namaaz and it went off peacefully' was a sentence found in police affidavits.

The assertion implied that the Friday afternoon namaaz, the one time in the week when Muslim men congregate in large numbers to pray collectively, was a potentially explosive occasion, one that needed policing, and its peaceful occurrence was noteworthy.

Yet, when asked to list the occasions when Friday afternoon namaaz had created a dangerous situation, the police could come up with no answer.

The only conclusion to be drawn was that any outdoor gathering of Muslims was a red rag for the police. So it isn't surprising that Muslim ghettoes would by definition be considered 'sensitive' by them.

This categorisation has been accepted universally (by non-Muslims, for no one has asked Muslims what it feels to have their neighbourhoods labelled 'sensitive'). It therefore came as a shock to discover, during the hearings of the Srikrishna Commission, that rioting often began in Hindu areas, specially those where the Shiv Sena or the BJP had a strong presence.

In fact, the very first incident of violence in December 1992 was initiated by Shiv Sainiks in Dharavi, where their cycle rally held to celebrate the demolition of the Babri Masjid passed outside a mosque raising slogans of hate.

Similarly, the very first incident of violence in January 1993, on the 1st, was perpetrated by Hindus in the Sena stronghold of Nirmal Nagar, Bandra East, in which the police were the target.

This pattern was repeated throughout January -- areas that had been peaceful in December such as Ghatkopar, Gamdevi, Kalachowkie and Bhoiwada, turned into battle zones in January, battles that were mostly one-sided, since Muslims were few and the violence was started by Shiv Sainiks.

The Sena bastions of Kalachowkie and Bhoiwada saw the largest number of rioters out on the roads, their numbers going up to 10,000.

All this information was given by the police themselves in their affidavits. But it was left to Justice Srikrishna and his team to connect the dots and realise who started the violence, who was at the receiving end, and most importantly, who got shot in police firings.

If these discoveries came as a shock, it was because not a hint of this was given by newspaper coverage of the riots. The image they gave was one of armed Muslim mobs against the police in December 1992, or of the Radhabai Chawl incident in January 1993 (in which six Hindus, five of them women and children, were burnt alive), or of the commando raid on Suleman Usman Bakery, aimed at flushing out AK-47 wielding terrorists. The stereotype of the violent Muslim was perpetuated by the press.

Police affidavits too made no mention of Hindu rioters, referring always to Muslim mobs. It was only when they listed the names of those dead in police firing that it came out that Hindus too had been shot.

What were they doing in a supposedly all-Muslim violent mob? Burly policemen would start fumbling and rifling through bulky affidavits for answers to this question. It took a series of yes-or-no questions put by Justice Srikrishna himself for one senior inspector (Ghatkopar) to admit that it was the Hindus who had initiated the violence there.

Yet, how many times has Ghatkopar been declared sensitive? It saw some of the worst incidents of violence. Or Antop Hill, where Muslims were herded into an open space, surrounded by cops and Shiv Sainiks for three days, rescued only by the army which too faced firing from the Hindu-only buildings?

The incident there of three Muslims being burnt alive inside their Maruti made Page One news, but at least four other Muslims were burnt alive there, under the nose of the police.

Similarly, many violent incidents started after the Sena conducted maha-aartis at temples. Yet, the police bandobast then was never repeated, for how could a temple need policing?

In fact, during localised area riots, this reporter has seen Mumbai's cops sipping tea leisurely outside temples, even as Hindus around them break curfew; while across the road, fearful Muslims peep out of curtained windows, wondering whether they can venture out during curfew and face patrolling armed cops.

The Bajrang Dal started its membership drive inside a temple in Goregaon; and as late as 2002, Bajrang Dal activists congregated at temples during a bandh.

Yet, as news reports of last year's Maharashtra assembly elections show, police bandobast continues to be spruced up in 'Nagpada, Govandi, Kurla, Dharavi'... The one area added was Bhandup, probably because Shiv Sainiks there had clashed with their erstwhile colleagues, now in the Maharashtra Navnirman Sena.

Forget Hindu-Muslim riots, Shiv Sainiks in Parel and Dadar have run amok whenever it has suited them. Remember the time Meenatai Thackeray's bust was reportedly vandalised? Or when Raj Thackeray's 'boys' thrashed North Indians alighting at Kurla Terminus to sit for all-India competitive exams? But catch the cops listing these areas as 'sensitive.' Why, like temples, Shiv Sena shakhas are the other resting ground for the police.

Ironically, in the government's 'guidelines on dealing with communal disturbances' issued to the Mumbai police in 1986, the Shiv Sena has been classified as a communal organisation.

Like the Maharashtra police, the Gujarat police are also notorious for their leniency towards Hindutva groups. How come then that Patel areas in Gujarat have been termed 'sensitive' now?

It's not because they've attacked cops, because that they've never hesitated to do. Patidar leader Hardik Patel's advice last month to the Patel boy who wanted to commit suicide to instead 'kill 2 to 5 policemen' only confirmed their contempt for the men in uniform.

Is it because they've come out in open opposition to the BJP? But that too has happened before, in 2012, when Narendra Modi as chief minister sidelined state BJP stalwart Keshubhai Patel.

But they were soon co-opted by him. Perhaps his successor Anandiben, ironically a Patel herself, lacks his skills, and has allowed this powerful community to remain angry with the BJP.

During election times, Patel anger could be a dangerous thing indeed -- enough to earn their neighbourhoods the label 'sensitive' and 'spruce up police bandobast' there. 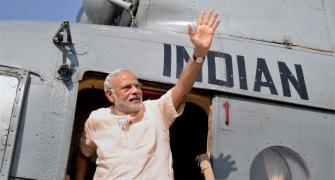