'Of course, I would like a world in which candidates don't ask for my vote on religious (etc) grounds.'
'But will we ever live in a world free of such appeals?'
'More important, will a Supreme Court verdict, by itself, ever deliver such a world?' asks Dilip D'Souza.
Illustration: Uttam Ghosh/Rediff.com 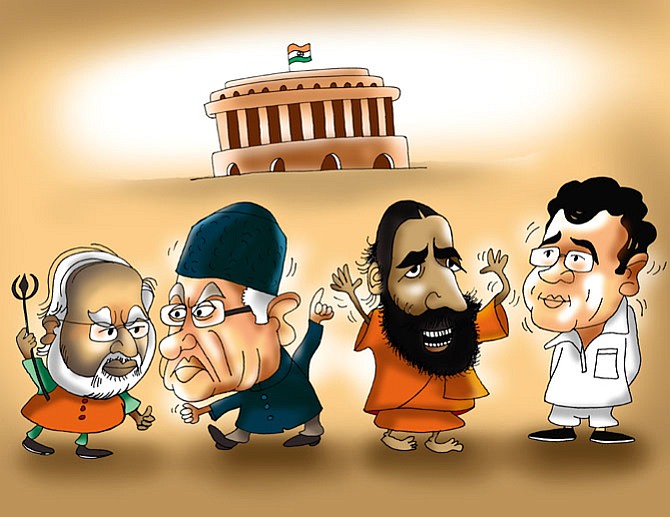 Not long ago, a bright young film student dropped in to have a chat about the way religion influences our lives. It was well-timed, because I was still seething over a line I had heard in a sermon just two nights earlier.

After rattling off some (shaky) observations about his faith, this man concluded: 'And this is why our religion is greater than every other.'

I mentioned this incident to the student, saying it encapsulates so much that bothers me about every religion. There's the constant yearning to feel superior -- check the use of phrases like 'only way' and 'most tolerant.'

That is always coupled with the urge to belittle other faiths -- check the derogatory connotations of terms like 'infidel' and 'philistine.'

There is the assumption that you can say these things in public. Admittedly, most of the sermoniser's audience shared his faith, but there were others present, including agnostics like me.

What is such language supposed to make us feel?

Yet despite the distaste I feel, I'm also fully aware that religion is never going to disappear, for it speaks to and expresses some deep, fundamental, ineluctable human longing.

The challenge for agnostics like me -- and it is a stiff challenge -- is to understand and live with that.

All of which might hint at the spirit in which I react to the recent Supreme Court decision holding that asking for votes on the basis of 'religion, race, caste, community or language' is a 'corrupt practice.'

I mean, on the face of it, of course, I would like a world in which candidates don't ask for my vote on religious (etc) grounds. I think it is offensive and absurd for a candidate to say in a campaign speech: 'Vote for me because I am Christian.'

Just as offensive would be: 'Vote for me because you are all Christian.' (If I need to say it: You can replace 'Christian' in those two sentences with 'Muslim', 'Parsi', 'Hindu', 'Jewish', 'Bah'ai' or your own favourite or not-so-favourite faith).

Offensive, because these make the same empty assumption I heard in that sermon. What about your merely being Christian, I'd like to ask such a candidate, makes you deserving of my vote?

Why should a Christian vote for you merely because you are one?

Why don't you tell me about your record, or your plans for my constituency?

But will we ever live in a world free of such appeals?

More important, will a Supreme Court verdict, by itself, ever deliver such a world?

You might as well ask, will we ever live in a world free of religion?

There's a human reality out there that this Supreme Court judgment ignores. Simply put, we are naturally drawn to others of our kind.

Throw a group of French speakers in the same room as a group of Hindi speakers, and even if everyone is comfortable with a common language like English, you will find Hindi gravitates to Hindi, French to French.

Our matrimonial ads and sites tell the story of what's truly important to us when we select spouses. I'm yet to see a category like 'Long-haired' or 'Between 1.65m and 1.80m tall' or 'Car mechanics', like I see 'Kayastha' or 'Muslim' or 'Roman Catholic'.

No: If I'm a Kayastha, somehow I'm persuaded that my spouse must be one as well.

And political parties know these sentiments well. Which is why those that speak to caste, language, region or religion attract far more fervent support than those that pretend to cast wider nets.

These realities won't change, and certainly not because of this Supreme Court judgment. Again, that's the challenge for agnostics like me.

But finally, let's also remember that the judgment was actually a narrow 4-3 verdict. What that was about itself speaks of how far removed from our daily lived experience this judgement is.

The split judgment hinged essentially on the meaning of the word 'his' in Section 123(3) of the Representation of Peoples Act.

The Act makes it illegal for a candidate to ask for votes 'on the ground of his religion, race, caste, community or language' (emphasis mine).

Question: Does 'his' refer to the candidate alone? Or to the electorate as well? You are flabbergasted that I'm asking? Well, the Court's dissenting minority judgment went with the former; the majority with the latter.

To me, the language in the Act is clear. 'His' used like that is unambiguous. It refers to the candidate, just as it does in 'The candidate drove his bicycle into the river.' I can't imagine interpreting it any differently.

Yet the Supreme Court majority judgment -- and thus the binding one -- has effectively suggested that in that sentence, the bicycle belongs to us all.

This is the stuff on which I must rest my agnostic hopes of election campaigns free of religious appeals?

Forgive my lack of enthusiasm. 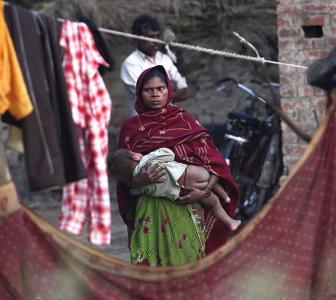