The Congress forgets Modi has demigod status in Gujarat and there is no way he can be defeated in the state, argues Syed Firdaus Ashraf. 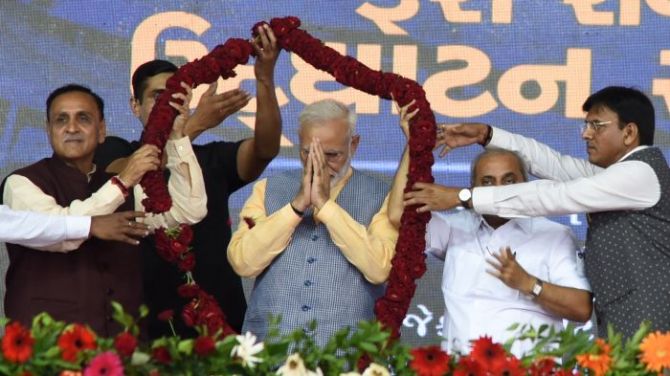 While covering the 2007 Gujarat assembly election, I interviewed a well-known social scientist known for his anti-Modi views.

"The BJP (Bharatiya Janata Party) will do badly," he declared, adding, "(then Gujarat chief minister Narendra) Modi could lose his seat from Maninagar."

I wondered if he was in the right frame of mind, but I kept quiet.

After lecturing me for half-an-hour, he asked, "What feedback do you have from the ground?"

I couldn't restrain myself, and told him, "Sir, with due respect, you are completely out of touch with reality. Modi will win the election and in Maninagar, he will win by a huge margin."

Using a Gujarati phrase which I had heard many voters saying, I said, "Ek sau ek takka the BJP will win (101 per cent the will win)."

"What makes you say so?" he asked.

"The answer is in one word: Trust," I told him. "Gujarati voters trust Modi."

Whoever I spoke to in Gujarat, I told the social scientist, had immense faith in Modi's leadership and they felt he could do no wrong.

When the election results were out, Gujarati voters proved once again that they will only vote for Modi.

Ten years later, I hear the same kind of analysis that I heard from the social scientist from different people and intellectuals. Modi and the BJP, they declare, will lose the 2017 election:

'The youth in Gujarat led by Alpesh Thakore, Hardik Patel and Jignesh Mevani, will annihilate the BJP in the state.'

'Caste will overtake Hindutva and that will be the end of the BJP.'

'The Congress which used to win the Gujarat elections on the KHAM (Kshatriya, Harijan, Adivasi, Muslim) vote in the 1980s will make a comeback,' and so on.

The Congress is making the same mistake which it made in Uttar Pradesh.

Its leaders feel caste alliance will boost the party's chances in Gujarat just as they thought a tie-up with the Samajwadi Party would help it in the UP election earlier this year.

They forget that Modi has demigod status in Gujarat and there is no way you can defeat him in the state, until you introduce a viable, alternative, development theory.

Rahul Gandhi is making the same mistake which his mother Sonia Gandhi made in the 2002 Gujarat election.

After the riots of February that year, Modi had become a cult leader for many of the state's Hindus and the voters did not need another pro-Hindu party, which Sonia Gandhi was trying to project the Congress as, in 2002.

She started visiting temples before the election as Rahul is doing now.

Who can claim to be a bigger Hindu leader than Modi? That Hindu vote bank has been captured by the BJP, so Rahul must think out of the box.

When I spoke to a Gujarati businessman in Mumbai, I realised I was right.

This friend frequently travels to Gujarat and is very upset with the Goods and Services Tax as it has hit his business badly. Business has dried up, he complained, and he has no idea what he can do to revive it.

He too laughed when I told him, as Rahul does these days, that "Vikas gando thayo che (development has gone crazy)", but quickly added, "Whatever Rahul Gandhi does, he is going to lose the election."

Are the people of Gujarat not upset with Modi because of GST and demonetisation?

Are the people of Gujarat not upset that many jobs have been lost and no new ones have been created?

"Many Congress supporters taunt Gujarati businessmen with the same barbs. But let me tell you: The Gujarat election is not about vikas. It is about vishwas (trust). And our vishwas is with Modi, not with Rahul."

"Modi can go wrong on the economy," my friend said, "but his intentions are not wrong. He is working sincerely and wants good for our country, unlike the Congress which only wants to loot the country."

While reading the late Times of India editor Girilal Jain's book The Hindu Phenomenon, I realised how Gujarat's Hindu society views the world and how the secular parties have failed miserably to read the Gujarati mind.

'As a Hindu,' Jain writes, 'I believe in the ineluctable power of the time spirit: Mahakala will deliver on time -- neither earlier nor later. What is material is that the country is well set on that road, and while there may be, indeed there shall be, setbacks, these will be temporary.'

'When Hindus fought and lost,' Jain points out, 'they did not throw up prophets of woe and doom; they did not bemoan that their gods had let them down because they had been "disloyal" to them. Hindus are perhaps unique in this respect.'

So vikas may have gone awry, but vishwas always delivers.

One needs to be patient. And Gujarat's voters know that.