When a Chinese warship entered Japanese waters, the Indian commander called on China to maintain discipline at sea.
Dr Rajaram Panda explains the significance of the Malabar exercises between India, Japan and the US. 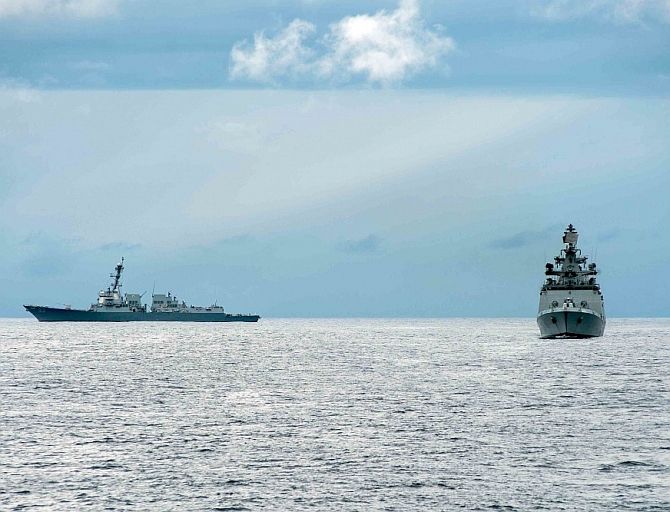 In a move aimed at securing regional peace and stability in the Indian Ocean regional and the Pacific, naval ships, aircraft and personnel from India, Japan and the United States participated in the annual exercise Malabar from June 10 to 17 2016.

Malabar 2016 is the latest in a continuing series of complex, high-end war-fighting exercises conducted to advance multinational maritime relationships and mutual security issues.

The large-scale exercises, codenamed Malabar are part of an annual event. Since 2015, it has included Japan as a permanent member.

These marine war games close to the South China Sea focus on deeper military ties and greater inter-operability amongst the three navies and develop common understanding of procedures for maritime security operations amid rising tensions in the region.

During his visit to India in December 2015, Japanese Prime Minister Shinzo Abe and Prime Minister Narendra Modi agreed that Japan would take part in the exercise on a regular basis.

When Defence Minister Manohar Parrikar met his Japanese counterpart Gen Nakatani on the sidelines of the Shangri-la dialogue in Singapore in early June, both agreed to boost trilateral cooperation with the US amid China's growing assertiveness in the region.

The rationale behind such exercises is because of the rising tensions stemming unilateral actions by certain powers that are in defiance of international practices and global rules.

Compliance to global rules in the conduct of foreign policy is the desirable practice of any responsible nation.

That trust is being breached by unilateral action by China, whose assertiveness in regional territorial issues have stoked tensions and led to realignment of power relations.

The exercise, therefore, assumes significance as it is being conducted close to the South China Sea. The objective is to check China's assertiveness in the region. 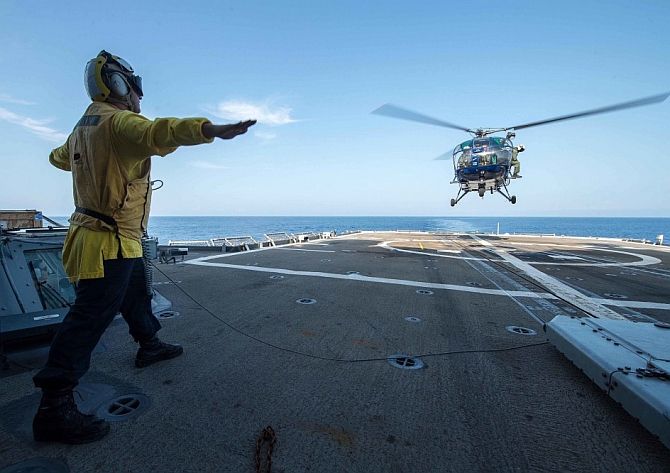 The fleet of warships of the three countries held the large-scale joint naval exercise in the Western Pacific, close to a Japanese island chain, part of which China claims.

In the neighbouring South China Sea, China has demarcated the 9 dash line, whereby it claims almost the entire sea space in its entirety.

Tokyo and Washington as well as other nations having stakes directly or indirectly worry that China seems determined to extend its influence to the Western Pacific, by deploying a growing fleet of submarines and surface vessels in the distant oceans.

India and the US have regularly conducted the annual exercise since 1992.

Japan participated in the 2007 Malabar exercises hosted by India.

China lodged a strong protest against the inclusion of Japan and Australia.

Japan has taken part in the drills only four other times. That situation has now changed with the change in geopolitics with Japan's participation now on a regular basis.

In 2015, it was conducted off Chennai in which Japan participated.

The US Navy's 7th Fleet, based in Yokosuka in Kanagawa Prefecture, Japan, also took part in the exercise.

The Japanese Maritime Self Defense Force dispatched its new warship, Hyuga -- one of Japan's three new 'helicopter carriers' with SH 60 K integral choppers and long-range maritime patrol aircraft, as well as P-3C and P-1 patrol planes, and US-2 rescue aircraft to the drills. Hyuga has been practicing submarine hunting and anti-craft defence. 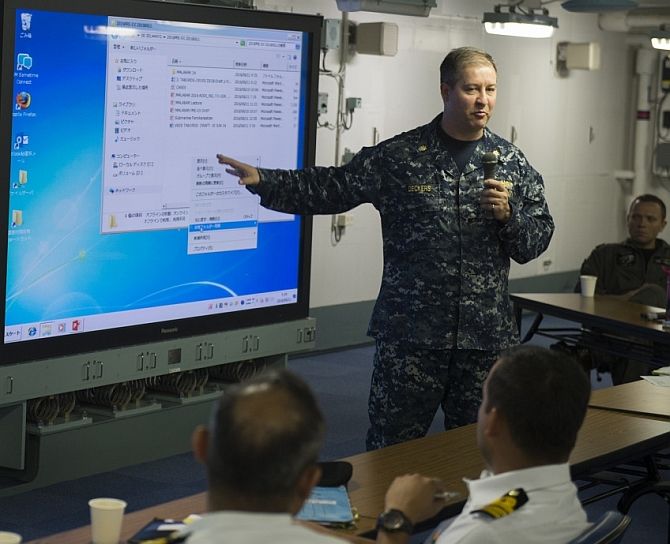 This was the 20th edition of the naval exercise in consonance with India's Act East Policy and growing ties among the three countries.

These four ships had sailed out on a two-and-a-half month-long operational deployment to the South China and North West Pacific, during which the ships made port calls at Cam Rahn Bay (Vietnam), Subic Bay (The Philipines), Sasebo (Japan), Busan (South Korea), Vladivostok (Russia) and Port Klang (Malaysia), before joining the Malabar maritime exercise with the US Navy and the JMSDF.

While INS Sahayadri and INS Satpura are indigenously built guided missile stealth frigates, the INS Shakti is a modern fleet tanker and support ship and the INS Kirch an indigenous guided missile corvette.

The exercise is aimed at supporting maritime security in the Indo-Pacific region and benefit global maritime community.

The harbour phase of the exercise started on June 10 at Sasebo and the sea phase in the Pacific Ocean was conducted from June 14 to 17.

The at-sea portions of the exercise conducted in the Philippine Sea were designed to advance participating nations' military-to-military coordination and capacity to plan and execute tactical operations in a multinational environment.

The marines of the three countries have a common understanding and knowledge of a shared working environment at sea. Such joint exercises help advance the level of understanding as the maritime forces work as natural partners and this helps strengthen relationships.

Chinese discomfort on the Malabar is not difficult to discern.

Even at the time of Malabar 2015, China commented that India-Japan defence cooperation as 'dangerous for Asia.'

China takes pride that it was because of its objections that Japan had to withdraw from subsequent editions of the exercise since Malabar 2007. Since then, China's aggressive behaviour to extend its strategic space has been drawing a coalition of forces to cope with this Chinese challenge.

When a Chinese warship entered the contiguous zone a day before the drill commenced around Japanese waters near the Senkaku Islands in Okinawa, the Indian commander called on China to maintain discipline at sea and uphold the freedom of navigation.

Japan has returned since 2015 and before long one can expect Australia to join the trilateral initiative to make it quadrilateral.

A strong quadrilateral naval entente could be a key factor in ensuring peace and stability in the Asia-Pacific.

Beijing ought to realise that its military pursuit in extending maritime space would not serve its long term interests.

Negotiations and compromise in a spirit of accommodation would be a better strategic option for Beijing.

Dr Rajaram Panda is a former Senior Fellow at the Institute for Defence Studies and Analyses, New Delhi, and a leading expert on Asia-Pacific security/strategic issues. 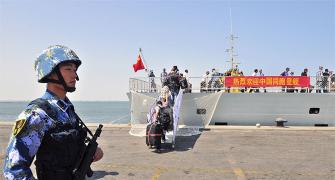 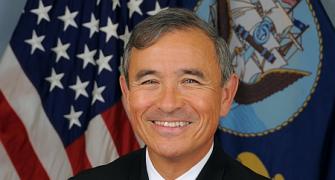 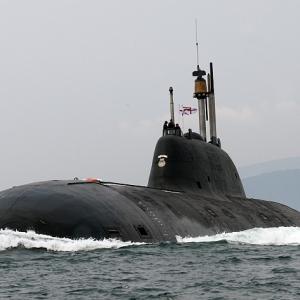