While the Congress was seemingly the biggest loser in last week's by-elections, there were other big losers, points out T V R Shenoy.

Who won? Who lost? The by-elections are over, the results are in, but we need to cut through all the emotions and look at the results rationally.

A by-election was held to fill the Lok Sabha seat of Hisar. Five by-elections were held simultaneously to fill vacancies in five assembly seats, namely Khadakvasla in Maharashtra, Daraunda in Bihar, Banswada in Andhra Pradesh, Tiruchirapalli in Tamil Nadu, and Indira Nagar in Puducherry.

Kuldeep Bishnoi was declared elected from Hisar. As for the assembly seats, Pocharam Srinivas Reddy won Banswada, Bhimrao Tapkir was elected from Khadakvasla, and Kavita Singh is the new MLA from Daraunda.

None of the victors belong to the Congress, nor to any of its allies in the United Progressive Alliance. Congress spokespersons, when this is pointed out, retort that none of those seats was actually held by the party, and so the defeats hold no particular significance.

Where does the truth lie? It lies, as always, in the details.

We have to begin with Hisar, where, thanks to Anna Hazare and his team (seemingly shrinking from one month to the next), most of the media's attention was concentrated. The Lok Sabha constituency of Hisar consists of nine assembly segments, namely Uchana Kalan, Adampur, Uklana, Narnaund, Hansi, Barwala, Nalwa, Bawani Khera, and Hisar proper.

Readers may be familiar with two of the nine MLAs from those seats. Uchana Kalan is held by Om Parkash Chautala, leader of the Indian National Lok Dal, while Adampur's sitting MLA was Kuldeep Bishnoi, who has now succeeded his late father Bhajan Lal in the Lok Sabha.

Significantly, the Congress candidate in the Hisar Lok Sabha by-election, Jai Prakash, failed to stand first or even second in any of the nine Vidhan Sabha segments, including the six that are currently represented in Congress hands; the poor man endured the ultimate humiliation, that of losing his deposit.

But if the Congress was the ultimate loser, who was the winner?

Luckily for Bishnoi he did well enough in the other segments, particularly the more urban parts, to win the day by the slim margin of 6,323 votes.

Bishnoi will go down in the record books as the victor, but think about all the advantages that he enjoyed. There was some measure of sympathy for him as the heir of the late Bhajan Lal. The Bharatiya Janata Party had already tied up with his Haryana Janhit Congress. And yet in the end it was the narrowest of victories for Bishnoi.

Could it be that the true winner was Om Parkash Chautala and his INLD? The former chief minister of Haryana was probably correct when he said that Ajay Singh Chautala's loss was nothing but a 'technical defeat'. 'Technically,' he said, 'we lost, but vote-wise we have won as our vote share went up to 349,618 from 241,493 in the 2009 election, which is an increase of around 41 percent.'

The contest seems to have been decided on caste lines, with the Jat votes going to Chautala and the non-Jat votes coalescing around Bishnoi. That is a happy omen for Om Parkash Chautala; the movement of Jat votes towards the Congress wrought by Bhupinder Singh Hooda has been reversed.

That said, the next assembly election is scheduled for 2014. Who knows how political allegiances may shift in Haryana between then and now? Bishnoi and the Congress may rediscover all they have in common -- as in the past. The INLD and the BJP may reach out to each other -- as in the past.

Haryana, where the Vedas and the Gita were first chanted, has also contributed to the political lexicon. Gaya Lal, the (independent) MLA from Hassanpaur in 1967, changed loyalties three times in a little over 24 hours; a disbelieving, slightly disgusted Y B Chavan then coined the enduring description of defection politics 'Aaya Ram, Gaya Ram'.

Having mentioned Chavan, let us turn to his own Maharashtra, specifically the stronghold of his 'maanas-putra' Sharad Pawar. The Nationalist Congress Party president is slowly handing the reins over to his daughter, Supriya Sule (the MP from Baramati, which includes the Khadakvasla assembly segment) and to his nephew, Ajit Pawar (deputy chief minister of Maharashtra).

Khadakvasla was last won by Ramesh Wanjale, fighting on a Maharashtra Navnirman Sena ticket, and his death in June led to the by-poll. Ajit Pawar bullied the Congress into giving the seat to the NCP, and then persuaded the recently-widowed Harshada Wanjale to fight on his party's ticket to mop up sympathy votes.

This led to the existing Shiv Sena-BJP alliance strengthening its hand by tying up with the Republican Party, and they countered talk of 'development' by pointing out lack of 'basic infrastructure.'

The first rebuff to Ajit Pawar and Supriya Sule came when only 32.67 percent of the constituents turned up to vote, and ultimately the BJP's Bhimrao Tapkir won by 3,625 votes.

This is a victory for the newly-minted allies, but it is certainly not a defeat for the Congress. If anything, the Congress might now find that Ajit Pawar is slightly easier to deal with after this electoral rebuff.

In neighbouring Andhra Pradesh, Pocharam Srinivas Reddy trounced the Congress's Srinivas Goud by the considerable margin of 49,889 votes, fighting on a Telangana Rashtra Samithi ticket. This, on the face of it, is a slap in the face for the Congress over its dithering on the creation of Telangana.

But the real loser may be the Telugu Desam Party. The party boss, N Chandrababu Naidu, once delighted in being called the 'CEO of Andhra Pradesh'. While a CEO is expected to oversee tactical, day-to-day operations a chairman of the board is supposed to offer a strategic vision, and Naidu is failing to rise to that role.

Pressed to comment, Naidu offered this feeble explanation: 'I belong to both the regions (EM>Telangana and Seemadhra). I have said this in the past and I am saying it again. I'm adopting a neutral stand. I need to protect my party in both the regions.'

This 'neutrality' meant that the TDP did not even put up a candidate in the Banswada by-election. Far from 'protecting his party in both regions', Naidu may end up erasing it in both. There is a warning in this for the Congress.

The Congress need look no farther than Bihar to see what happens when a party disappears from the ground. In the Daraunda by-election the Janata Dal-United's Kavita Singh defeated the Rashtriya Janata Dal's Parmeshwar Singh by 20,092 votes. Asked if there was a message in this for the Congress, a beaming Chief Minister Nitish Kumar responded with genuine surprise, 'here was the Congress? The Congress is not a factor.'

Enact a strong Lokpal Bill, or not? Build a broad coalition, or fall back on Jat votes in Haryana? Create Telangana, or keep Andhra Pradesh as it is? Strengthen the Congress-NCP alliance, or weaken it? The Congress simply cannot make up its mind.

A perfect example of this confusion came when P T Thomas, the Congress MP from Kerala's Idukki, tried to broker a meeting between Rahul Gandhi and representatives from Anna Hazare's Ralegaon Siddhi. Left red-faced after the representatives left Delhi after they were denied an appointment, poor Thomas apologised for the 'communication gap.'

There was indeed a communication gap -- between Thomas's heart, which told him to go to Ralegaon Siddhi, and his mind, which should have warned him that the Congress 'High Command' would never approve of any such initiative. When was the last time that Congressmen were encouraged to display 'initiative'? 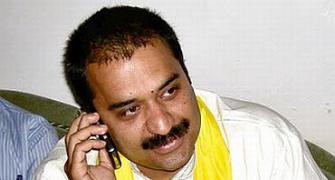 The national implications of the Hisar bypoll

Why the Congress needs to fear its allies