Killing the Brahmaputra in installments

It is high time India and China did a joint study to protect the river instead of competing to exploit and mutilate it in phases, says environmental activist Gopal Krishna.

The plans of both the governments are aimed at killing Tsangpo-Brahmaputra in installments. Vested global interests that have engineered a conflict between world's oldest civilizations in the past, appear to be on the prowl again.

Like China, the Indian government's master plan too envisaged storage dams, embankments etc. Construction of large dams on the Brahmaputra and its tributaries is facing massive opposition from environmental groups and affected communities.

The Zangmu project, the first 'mega hydroelectric power plant on the Tibetan plateau' proposed by the Chinese government involves six 85-megawatt power-generating units. The first of these units is expected to start working in 2014. The project, which is expected to cost about $1.2 billion (about Rs 6,900 crore). It is a key project for Tibet in China's 11th five-year plan. The Chinese government has plans to have a series of five medium-sized dams along the river in this area of Tibet.

The Zangmu Dam is an under construction dam on the Brahmaputra river, 9 km northwest of Gyaca in the Tibet Autonomous Region. The purpose of the dam is hydroelectric power production. The dam is part of the Zangmu Hydropower Project and will support a 510 MW power station. Construction on the dam began in 2009 and it is expected to be complete in 2015.

It will be relevant to look at the environmental impact assessment of this project and to examine whether it has been done in an impartial manner. It has been reported that EIA is being done by those who have vested interests in the project.

Given the fact that construction has begun on the Zangmu power station, it is obvious that assessment will be a stage-managed formal affair that would disregard adverse impacts on plant and animal life and possible geological disasters. The Chinese government has not shared any concrete information with India about the Zangmu project. Consequently, they are just raising polite concerns and getting diplomatic assurances.

The issue was raised in the Indian Parliament. Indian Foreign Minister S M Krishna informed the Rajya Sabha in April, "It is a fact that when I met my Chinese counterpart recently, the question of the hydel [hydroelectric] project over Brahmaputra river being built by it in Zangmu did come up. However, the Chinese foreign minister assured me that it is a small project which will not have any impact on the river's downstream flow into north-east India".

Although China's Gezhouba (group) corporation, one of China's biggest engineering and construction companies was awarded the contract for the project in April 2009, it was in April 2010 that Yang Jiechi, Chinese foreign minister, officially revealed the fact about construction of the dam.

Talking to reporters on November 16, after meeting Chinese Vice Foreign Minister Zhang Zhijun and other officials as part of the fourth round of strategic dialogue between the two countries, Foreign Secretary Nirupama Rao said she has voiced concerns over Chinese government's efforts to construct a dam on the Brahmaputra river.

Chinese officials clarified that the 510 MW hydropower project being built on the river in Zangmu "was not a project designed to divert water". It would not affect "the welfare and availability of water to the population in the lower reaches of the Brahmaputra," Rao was told by Chinese officials.

"We've had four expert-level meetings so far. That process will be ongoing," she said. Beijing has also assured New Delhi that it will continue with the system of exchanging hydrological data and flood management through the joint expert-level mechanism set up by the two countries in 2003.

Arunachal Pradesh's Minister for Power Jabron Gamlin says, "China's constructing a dam is a cause of concern for us, but we are not certain how big this dam is and what affect it would have on people living downstream."

Brahmaputra, known as the Tsangpo in China, is a trans-boundary river flowing into China, India and Bangladesh. It originates in the Jima Yangzong glacier near Mount Kailash in Tibet where it is called the Tsangpo Yarlung. From its origin in southwestern Tibet as the Yarlung Tsangpo River, it flows across southern Tibet to break through the Himalayas in great gorges and into Arunachal Pradesh where it is known as Dihang.

The Indian government's master plan for the Brahmaputra was first prepared in 1986. This was approved by the Indian ministry for water resources in 1997 after modification in 1995. Among the 168 dams proposed to be built in the northeast were the Lower Siang, Dibang, Lower Demwe, Lower Subansiri and Kulsi dams.

Besides preparing master plans, the Brahmaputra Board under the ministry prepared detailed project reports of drainage development schemes and multi-purpose projects such as projects on Noa-dehing river, a tributary of Lohit river, a major tributary of the Brahmaputra, on river Simsang  that originates from southern part of the Garo Hills, on the river Jadukata which is known as Kynshi in Meghalaya originating in the Khasi Hills, on the river Kulsi, known as Khri in the upper catchments in Meghalaya, a south bank tributary of the river Brahmaputra, on the Killing river that originates from south West Khasi hill ranges and on the river Jiadhal as one of the important north bank tributaries of the Brahmaputra.

There many such dams that has attracted enormous opposition. Are drainage development schemes and multi-purpose dam projects consistent in their objectives?

The dams being built by Chinese and Indian governments will cause major changes in flow regime, sediment load and quality of running water besides degrading the dynamic attributes of downstream water and reduce the flow of sediments essential to the formation of stream channel islands and bars. Experts point out that dams suppress natural fluctuations in flow and temperature which encompass optimum conditions for large number of aquatic organisms and the number of ecological niches for supporting diverse biotic communities is reduced.

It has been reported that Indian intelligence agencies have noted some 24 new hydro projects along the Brahmaputra river and its tributaries on the Chinese side. The committee of secretaries under Cabinet Secretary K M Chandrasekhar is looking into the issue of diversion of Brahmaputra waters and the hydro-power project at Zangmu, about 540 km upstream from where the Brahmaputra enters India.

But Union Power Minister Sushil Kumar Shinde says, "I have not been communicated by any quarter that China was constructing a dam on the Brahmaputra. So there is no point to react to it". This shows discordant notes within the government because Krishna has assured Assam Chief Minister Tarun Gogoi in response to a letter written to him that China has assured India about how the project at Zangmu would not reduce the flow of water of the river Brahmaputra to the lower reaches. Gogoi has expressed apprehension that the construction of the dam at Zangmu would create problems for Assam.

Earlier on a visit to Beijing in May, Union Environment & Forests Jairam Ramesh said, "The great fear in India has been that China would divert waters from the Brahmaputra to feed its arid southwest region, thereby impacting India as a middle riparian. Politically and even ecologically it would be unacceptable for India. If the project is in fact just a run of the river hydro power project, and doesn't involve plans for storage or diversion, it should not be cause for great concern." The same holds true for the proposed Indian hydro projects like national and Bihar's interlinking of rivers as well.

Unmindful of this and the protests against the sanction of hydro power projects in Arunachal Pradesh, the Prime Minister's Office has sought an explanation from the environment ministry questioning the delay in environment clearance of the project.  Arunachal Pradesh Chief Minister Dorjee Khandu has pleaded for expeditious clearances to hydro power projects in the larger interest of the nation and not to hold up the environmental clearance of individual projects for want of basin-wise studies.

Industrial projects are considered for environment clearance as per the provisions of the Environmental Impact Assessment Notification, 2006 but the clearance given to Subansiri hydro power project is held up because an eight-member expert committee recommended that the entire project be 'redesigned' with sufficient reduction in dam height and production (power generation) capacity to minimise adverse economic (livelihood) and environmental impacts.

Notably, Arunachal Pradesh has allotted 78 projects for hydropower development in the Brahmaputra basin with a capacity of 33,382 MW in all the sub-basins of the state, in addition to three projects with 2,710 MW under development. Earlier, on January 31, 2008, Prime Minister Manmohan Singh laid the foundation stone for the 3,000 MW Dibang multi-purpose project in Itanagar although the project had not yet secured the mandatory environmental clearances.

In May 2003, the PM had launched the 50,000 MW hydroelectric initiative to fast track hydropower development in the country. This initiative proposes to bring on line installed capacity of about 50,000 MW through 162 projects in 16 states by 2017.

The example of the 405 MW Ranganadi Hydro Electric Project Stage I, commissioned in 2002, Arunachal's first and so far the only completed large dam project does not inspire faith and confidence. It involves a dam to divert the flow of one river into the Dikrong river, creating 300 metres of head and generating power. After the completion of the dam, water flows in the river have gone down drastically. The fishes are gone. Agricultural fields are also affected badly as the channels made by villagers to take water to the fields have become dry. Horticulture, a very important source of livelihood is almost finished along the river banks. The river which was loved by the villagers has now become an object of fear because of the unpredictable flows from the dam.

Our concerns to protect Brahmaputra must be based on river basin approach and not on narrow national interests that makes Chinese and Indian governments blind to ecological sanity and intergenerational equity disregarding the opinion of Tibetan and north-eastern communities.

Let us examine the issues involved keeping in mind the benefits from free flowing rivers and intergenerational equity and act to protect the Brahmaputra basin in the Himalayan watershed by rising above parochial and myopic national and commercial considerations.

It is high time India and China did a joint study to protect the river instead of competing to exploit and mutilate it in phases. 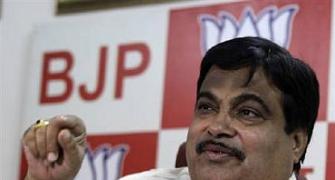 Gadkari to Sonia: 'Sermons won't make an impact'
US-China to step up military ties
Can India be firm with China on Brahmaputra dams?