News
Business
Movies
Sports
Cricket
Get Ahead
Money Tips
Shopping
Sign in  |  Create a Rediffmail account
Rediff.com  » News » 'Being non-corrupt is not the same as being anti-corrupt!'

'Being non-corrupt is not the same as being anti-corrupt!'

Dear Mr Oomen Chandy and Mr Ramesh Chennithala, I can overlook a lot of sins of omission and commission by the Congress, but how will I ever forgive you for forcing me to agree with Pinarayi Vijayan?

The boss of the CPI-M's Kerala wing says Kerala Congress-B leader R Balakrishna Pillai has no right to stand for election since he has been jailed -- not just charged, mind you, but actually convicted -- for corruption. And since it is the Supreme Court itself that handed down the verdict it is not as if there is any higher court to overturn that sentence.

Why in the name of heaven are you Congressmen permitting Pinarayi Vijayan to mount the moral high ground?

More to the point, what does it say about the choice that shall confront the voters of Kerala come Wednesday, the thirteenth of April?

I think the situation was summed up rather well by a young MBA that I met in Kochi, who, in discussing the potential chief ministers of Kerala, said, "Being non-corrupt is not the same as being anti-corrupt!"

The Congress may have earned a terrible reputation in, say, Delhi or Mumbai, but it really is relatively better off in Kerala where either Oomen Chandy or Ramesh Chennithala -- both of whom have been named as a potential chief minister -- would be non-corrupt administrators.

But what is the point if the United Democratic Front government they lead would include tainted parties?

What is the point of being non-corrupt oneself if you also tolerate seeming corruption in your allies? Does Kerala really want to see a Congress chief minister brush corruption under the carpet of 'compulsions of coalition' as a certain non-corrupt Congress prime minister did not so long ago?

That said, what is the alternative? V S Achuthanandan, the current chief minister, is not just non-corrupt, but anti-corruption, meaning that his natural inclination is to fight the corrupt. But what is the point if he does not have his own party backing him up?

Let us remember that the CPI-M was prepared, as late as one week ago, to deny a ticket to its own sitting chief minister. That decision was taken at a meeting where CPI-M General Secretary Prakash Karat was present, indicating that Achuthanandan has absolutely no support from his comrades at any level. Kodiyeri Balakrishnan, currently Kerala's home minister, was supposed to be the man leading the campaign.

It was only sustained public pressure that forced the CPI-M to reverse that stand. The grudging offer of a ticket does not, however, indicate that the CPI-M has sheathed its knives.

V S Achuthanandan was supposed to be the Left Front's man for the top job in the assembly elections of 1996, polls that the Left Democratic Front was expected to win. And win it did -- but the CPI-M ensured that Achuthanandan himself lost from his own seat, giving E K Nayanar a second bite at the chief ministerial cherry.

The rivalry between Pinarayi Vijayan and V S Achuthanandan is now far more pronounced than it was fifteen years ago. What exactly might prevent history from repeating itself, with the CPI-M's disciplined cadres voting for the Congress's Lathika Subhash in Malampuzha rather than an Achuthanandan forced on the ticket by popular demand?

It says something of the utter bankruptcy of politics in Kerala that Lathika Subhash probably got the Congress ticket thanks to a tit-for-tat policy; the Left Democratic Front is putting up a woman, Professor Suja Soosan George, against Oomen Chandy.

Women may constitute 51.42% of the state, but you can safely wager that the male gender will corner the lion's share of the seats -- despite both the Congress and the CPI-M supporting the Women's Reservation Bill in Parliament.

I agreed with Pinarayi Vijayan so, in the spirit of total non-partisanship, let me now agree with K B Ganesh Kumar too. The Kerala Congress-B acting chairman pointed out that ten years ago, in 2001, the Left Democratic Front projected the arrest of Abdul Nasser Madani, the leader of the Peoples Democratic Party, as proof that it could not be swayed by sectarian sentiment; in 2006 the same Left Front was painting the same man as an innocent person languishing in jail.

Why, K B Ganesh Kumar, implicitly asks, was it proper for the CPI-M to support a jailed politician but immoral if the Congress does the same? By the same logic, if the CPI-M can ally itself with Madani's Peoples Democratic Party why is it wrong for the Congress to share a platform with the Muslim League's P K Kunhalikutty?

You might say that Oomen Chandy and Ramesh Chennithala are taking their lead from the Congress high command. Ooze from the 2G scam might be lapping at the doors of the DMK, but that did not prevent the Congress from continuing its alliance with M Karunanidhi.

And what is the alternative anyhow? If Kerala has DMK-ruled Tamil Nadu on one side it has BJP-ruled Karnataka to the north, not exactly a shining example of scandal-free governance!

Please note that in all this flying mud one theme is notable only by its absence -- 'development'. Kerala may have the worst physical infrastructure -- potholed roads to overflowing drains -- of the four major southern states, but does anybody care?

Given all this you may think Kerala's voters lack any options come Election Day. That would be a mistake.

The all-important question confronting Keralites on April 13 is, "Do you want to stay at home, or will you stand under the summer sun to vote?" 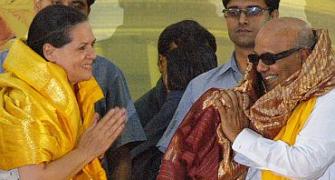