'China's latest defence White Paper has been issued against the backdrop of the upgraded Sino-Pakistan strategic relationship which has impinged on India's sovereignty and territorial integrity, and Beijing's continuing intransigence on tackling the issue of the disputed border or intrusion by PLA troops,' says Jayadeva Ranade. 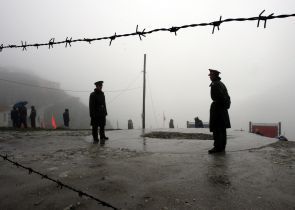 The Defence White Paper issued by China's Ministry of National Defence, MND, on May 26, 2015, titled 'China’s Military Strategy,is the briefest of all the nine White Papers issued since 1998.

The series of White Papers are official statements of Chinese government policy and usually provide Beijing's official view of the contemporary international and regional situation, relations with some countries and a statement of the major elements of China's defence policy. This White Paper was issued as tension in the South China Sea was rising.

It additionally expands China’s official definition of 'national interests' and emphasises that China is determined to become a global 'maritime power.' Unlike earlier White Papers, this one includes none of the usual platitudinous references to the 'Five Principles of Peaceful Coexistence' or 'harmonious world.'

Its contents have implications for all of China's neighbours, including India. The White Paper makes clear that China perceives this as 'an important period of strategic opportunity' during which it can realise the 'Chinese Dream of great national rejuvenation.'

Noticeable importance has been given in the White Paper of 2015 to China's domestic security situation. It acknowledges that China is facing a 'formidable task' to 'maintain political security and social stability.'

The issues of Tibet and the Dalai Lama, which in the past two years have been raised by Chinese interlocutors at every meeting with Indian counterparts, received specific mention in the White Paper after an interregnum of over five years, thereby confirming their current elevated importance to the leaders of the Chinese Communist Party, CCP.

The White Paper issued in 2013 did not refer at all to the issue of Tibet while the solitary reference in the White Paper of 2010 was considerably more mellow.

Concern in the upper echelons of the CCP about attempts by the US and West to dilute Communist ideology and topple the CCP finds mention in the latest White Paper. These suspicions were heightened after 2012 when former Politburo member Bo Xilai was ousted and expelled from the CCP.

Reflecting the negative view of China's leaders of the US and West, the 2015 White Paper asserts that 'anti-China forces have never given up their attempt to instigate a colour revolution' in this country.' Consequently, China faces more challenges in terms of national security and social stability.

While highlighting the PLA's role as the army of the party, it noted the need for political and ideological education in the PLA. The PLA was predictably enjoined to firmly follow the goals of the Chinese Communist Party 'resolutely safeguard China's sovereignty, security and development interests' and provide a 'strong guarantee for realising the Chinese Dream of achieving the great rejuvenation of the Chinese nation.'

The military aspects of the White Paper of 2015 continued the trend set by the White Papers issued in 2011 and 2013 to formalise the identities of the different services and distinguish between the PLA's ground forces and the PLA Air Force, PLAAF, PLA Navy, PLAN, and the PLA Second Artillery, PLASAF.

The White Paper of 2011 had, in fact, for the first time referred to the ground forces as the PLA Army, PLAA, and this practice has been continued in subsequent White Papers.

Significant for China's neighbours is Beijing's continuing concern about its periphery. While acknowledging that the international environment is generally peaceful, it dwells on the likelihood of 'immediate' and 'potential threats of local wars' and notes that 'small-scale wars, conflicts and crises' continue to recur in some regions.

Asserting that 'certain disputes over land territory are still smouldering,' it listed complex and volatile hotspot issues, such as ethnic, religious, border and territorial disputes as among the other threats that China faces in addition to the increased terrorist activities.

In an apparent hint that India is also perceived as a long term threat, it identified the 'international competition for the redistribution of power, rights and interests' as a new threat confronting China.

The assessment in Chapter I of the White Paper is pertinent. While reiterating China's maritime territorial claims, it referred to 'issues concerning China's territorial sovereignty and maritime rights and interests,' and said 'some of its offshore neighbours take provocative actions and reinforce their military presence on China's reefs and islands that they have illegally occupied.'

'Some external countries are also busy meddling in South China Sea affairs; a tiny few maintain constant close-in air and sea surveillance and reconnaissance against China. It is thus a long-standing task for China to safeguard its maritime rights and interests.'

'Certain disputes over land territory are still smouldering. The Korean Peninsula and Northeast Asia are shrouded in instability and uncertainty. Regional terrorism, separatism and extremism are rampant. All these have a negative impact on the security and stability along China's periphery.'

The White Paper detailed some of the enhanced capabilities that China's armed forces will acquire in the coming years, which includes aerospace and cyber capabilities. The PLAA, or ground forces, it said will acquire 'mobile operations' and 'multi-dimensional offence and defence.'

The importance of integrated joint operations (IJO) was underscored.

Included among the PLAN's capabilities is that for 'strategic deterrence and counterattack.' The White Paper similarly added a definite offensive role for the PLA Air Force and said it will 'endeavour to shift its focus from territorial air defence to both defence and offence, and build an air-space defence force structure.'

The strategic strike force, or PLASAF, it said, will continue to have nuclear and conventional missiles in its inventory and accelerate development of independent innovations in weaponry and equipment.

It was tasked to improve the force structure by combining nuclear and conventional capabilities and strengthen capabilities for strategic deterrence and nuclear counterattack, and medium- and long-range precision strikes.

The stress on maritime capabilities was further emphasised in the assertion in the White Paper that 'The traditional mentality that land outweighs sea must be abandoned, and great importance has to be attached to managing the seas and oceans and protecting maritime rights and interests.'

China, it said, must 'develop a modern maritime military force structure commensurate with its national security and development interests, safeguard its national sovereignty and maritime rights and interests, protect the security of strategic SLOCs and overseas interests' so as to provide strategic support for building itself into a maritime power.

Especially relevant for India, as it could well impinge further on India's sovereignty and territorial integrity, is China's effort to build the PLAN's maritime capability which has accelerated after the 18th Party Congress and articulation by Chinese President Xi Jinping of the muscular 'China's Dream.'

A US estimate claims that China has plans to increase its Navy to 351 ships by 2020. Just months prior to the 18th Party Congress in May 2012, Beijing had begun to issue new Chinese passports sparking protests internationally.

The passports appeared to be a re-statement of China's perceived territorial limits and mirror the extent of the Chinese nation as envisioned in the maps published by Beijing in 1954, and which continue to be taught in China till today.

The map, which is part of a textbook titled A Brief History of Modern China, claims to show 19 of the 'Chinese territories taken by the Imperialists in the old Democratic Revolutionary Era (1840-1919).'

These include Nepal, Bhutan, Burma and in India the state of Sikkim and India's territories in the North-East comprising the former states of Assam, NEFA and Nagaland, as well as the Andaman Islands.

The White Paper has been issued against the backdrop of the appreciably and recently visibly upgraded Sino-Pakistan strategic relationship which has impinged on India's sovereignty and territorial integrity and Beijing's continuing intransigence on tackling the issue of the disputed border or intrusion by PLA troops.

The White Paper additionally states that the PLAA and PLAAF will increase patrolling along the borders and the PLAN will enhance force projection activities in the South China Seas and increase its visibility in the oceans. Pressure on India can be expected to increase.

IMAGE: Chinese soldiers at its border with India at the Nathu La Pass in Sikkim. Photograph: Reuters 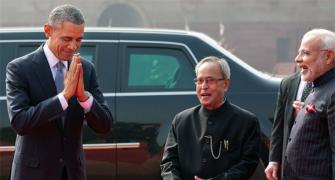 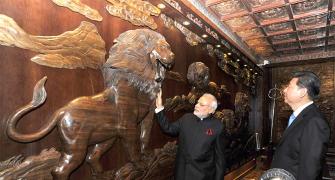