News
Business
Movies
Sports
Cricket
Get Ahead
Money Tips
Shopping
Sign in  |  Create a Rediffmail account
Rediff.com  » News » It's time to shut the IAS down

The IAS distrusts outsiders bringing change, the product of being a tenured cadre; it worships authority rather than citizenship, the legacy of being lackeys of the Queen-Emperor -- and it admires itself above all, for no reason that the rest of us can discern. Mihir S Sharma explains. 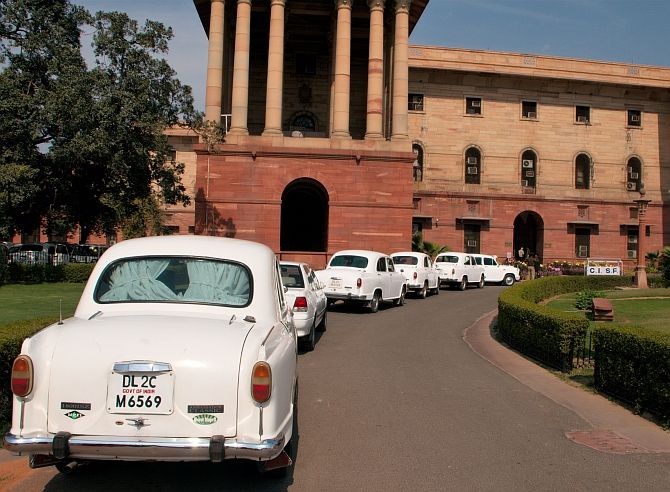 If Prime Minister Narendra Modi fails to live up to the expectations that he has raised, it will not be entirely his fault.

After all, he has moderated his promises.

The shining vision of India's future he outlined in early 2014 has been replaced by the -- still inspiring -- set of aspirations listed in the 2015 Budget.

A house for everyone by 2022, with 24-hour power, clean drinking water, a road and modern sanitation; one job per family, medical and skilling facilities close by, and much else of that nature.

If he seems to have little idea of how to get there, well, he was never asked for such details about implementation on the campaign trail, so it's a little late to complain now.

The problem is that he is trying to drive the country to these oh-so-distant targets by 2022, but he still has the same old car with which to do it.

Today, in the middle of 2015, it is doubly, triply, quadruply clear that changing the driver was not enough -- the driver was never the biggest, the realest problem. The real problem is the car.

Modi might have the will, the energy, the sincerity and the ambition. But unless he fundamentally changes the system that implements his will, that realises his ambition, he is doomed to fail.

And that system is the Indian government and its bureaucracy. I want you to pause for a moment to think, as objectively as you can, about how farcical it is.

We, the world's fastest-growing economy and its largest democracy, have a state structure basically unchanged from the extractive system set up to rule a vast, pastoral country on behalf of a distant island nation.

We have a twice-born bureaucracy that holds so much power.

Why? Because they are the happy inheritors of a system in which civil servants would have been loyal to Queen and Whitehall, but ministers may have been dangerously nationalist -- and thus needed to be easily vetoed or blocked.

We still have a tenured, generalist civil service, organised on Victorian public-school principles, even as our economy and governance become fiendishly more complex.

Every single foreign investor, foreign do-gooder, foreign diplomat, is astounded by both the intelligence of their Indian bureaucratic interlocutor and their -- much of the time -- complete and utter ignorance of the issues at hand.

What else can you expect?

The person having to deal with FIIs today may have been dealing with water harvesting yesterday.

No matter how high your rank in a deadly dull competitive examination in the early 1980s, you will not handle that transition seamlessly.

It is natural, therefore, that you take no risks and show no imagination; you are, after all, always a step behind those you are regulating or governing.

It is less natural that you are incredibly arrogant even while being that step behind. (Or to suppose that anyone else in government being paid more than you would be a colossal, extraordinary insult to the Indian Republic, equivalent to Bangladesh annexing most of Eastern India. Imagine if a tax expert or a lawyer was hired from the private sector and paid more than the Cabinet Secretary! The whole edifice of government would collapse! Anarchy would rule! Four southern states would sink into the sea! Etc, etc)

We have an un-fire-able, unaccountable civil service, which can screw up as much as it likes -- consider, for example, the monumental error that was the FII-MAT (minimum alternate tax) imbroglio -- and still will face no consequences.

This is the largest cause of the institutionalised mediocrity that holds this country back. Even promotions are largely dependent on seniority and not record; nobody would run any other organisation thus, but it's OK to run a complicated, under-governed country like this?

This laughable claim can only be the product of wilfully refusing to actually read even one newspaper headline over the past 20 years.

Who can claim that bureaucrats are not politicised, given contemporary history? How many have simply refused to sign what they are supposed to? There are some such glorious names, but vanishingly few.

Combine these three factors, and you have a government machinery that is unaccountable, under-informed, and all-powerful. It lacks creativity. It automatically stifles innovation (witness the colossal idiocy underlying its shutdown of Uber in the capital).

There is no alternative but to shut these people down. Root-and-branch reform, beginning with an end to the imperial-era privileges of the Indian Administrative Service.

The IAS distrusts outsiders bringing change, the product of being a tenured cadre; it worships authority rather than citizenship, the legacy of being lackeys of the Queen-Emperor -- and it admires itself above all, for no reason that the rest of us can discern.

The prime minister, sadly, agrees with that.

He, too, seems to imagine that his transformative promises can be operationalised and implemented by the same people who have failed us for 70 years.

His first action on entering 7, Race Course Road, was to tell the secretaries to the Union that they could speak to him directly, cutting out their ministers.

Subsequently he took over all appointments. This is in a way natural; when Modi was appointed chief minister of Gujarat, he had no experience of -- or history of interest in -- policy.

Guess who he turned to? Perhaps that's why the bureaucrats other Indians see as obstructive, backward-looking monuments to institutional arrogance are seen by our prime minister as gentle tutors in the art of governance.

This is a pity, since the only way he will actually transform India is by first transforming its hopelessly out-of-date government.

Actually, if Prime Minister Narendra Modi fails to live up to the expectations that he has raised, it will be entirely his fault. He should have started by ending the IAS.