News
Business
Movies
Sports
Cricket
Get Ahead
Money Tips
Shopping
Sign in  |  Create a Rediffmail account
Rediff.com  » News » Is the Army functioning more as a police force in J&K?

Is the Army functioning more as a police force in J&K?

Major Gogoi might well have saved protesters' lives by opting for a human shield to force his way through the mob. But he incalculably damaged the army’s reputation, not just in Kashmir, but anywhere that video is seen, says Ajai Shukla. 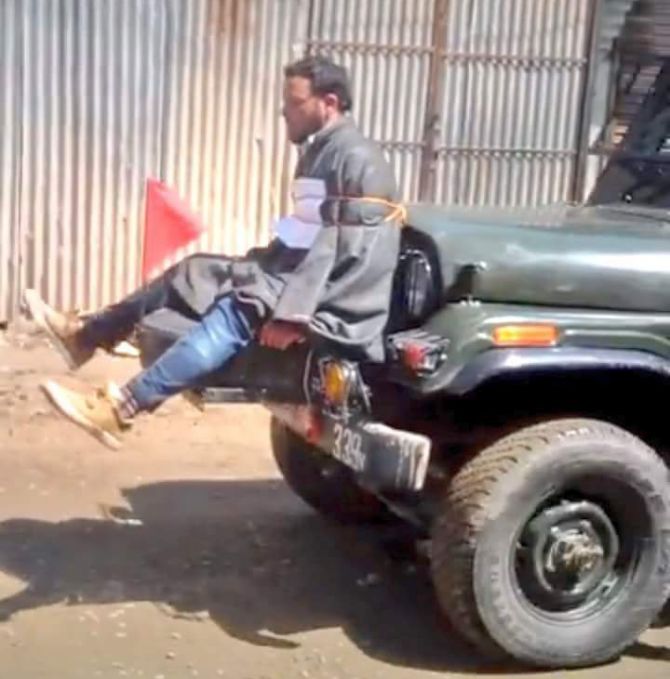 It testifies to the resilience of Indian public debate that four weeks after Major Nitin Leetul Gogoi, an army officer in Kashmir’s Budgam district, tied an innocent civilian to his jeep as a human shield against stone-throwing mobs, criticism continues despite official justifications.

This is an important debate.

In question here is not just an isolated incident of military misjudgment, which happens in moments of extreme stress in operations.

Instead, with the government and army establishments publicly justifying and condoning the actions of the officer, the question is more fundamental: Were Major Gogoi's actions in line with the ethos and principles that undergird the military?

From the start, government officials and the army chief himself solidly supported Major Gogoi's contention that he had no option but this extraordinary measure to safely evacuate polling officials from a voting station near Budgam.

Their lives, he argued, were threatened by a mob that had gathered to disrupt voting. To obtain clear passage through the stone-pelting mob, Major Gogoi picked up Farooq Ahmed Dar, ironically an innocent shawl-weaver who had just cast his vote in defiance of the separatist diktat.

With cellphone cameras rolling and capturing hte video of Major Gogoi's rescue convoy, which was also threatening through a loudspeaker that stone pelters would meet the same fate as Dar, the officer successfully extricated the polling officials. Dar was released, physically unhurt, after spending hours being driven around tied to the front of the jeep.

Predictably, videos of this spectacle went quickly viral on social media, painting the military as an army of occupation that cowered behind human shields.

For the army, which Kashmiri separatists routinely criticise but mostly respect as an impartial and restrained force, this was a humiliating blow to its public image.

The most compelling argument made by the diverse cast of characters that sprang to Major Gogoi’s defence was that the officer had saved many lives. These included Attorney-General Mukul Rohatgi and Army Chief General Bipin Rawat, who cut the ground out from under an army court of inquiry that is investigating Major Gogoi's conduct by summarily awarding him a commendation.

Punjab Chief Minister Amarinder Singh argued in an article: 'When Major Nitin Gogoi decided (and, mind you, it could not have been anything other than a split-second decision) to use a civilian as a ‘human shield’ to protect his men from a stone-pelting mob, he was simply reacting to a tough situation in a dangerous environment.'

Foremost is the worrying reality that the army is being permitted, even encouraged, by its chief to operate like a police force rather than as the military -- the last recourse of the State.

According to its own sacred regulations and operational procedures, the army shoots for effect when called in, rather than trying to save lives through measures such as firing over the heads of a crowd, far less taking hostages.

Major Gogoi’s militarily correct course of action would have been to warn the crowd to disperse and, if it refused to obey, to open fire with due restraint. That is what is prescribed in the 'Regulations for the Army', the foundational document that every officer possesses and reads.

As it turned out, Major Gogoi might well have saved protesters' lives by opting for a human shield to force his way through the mob. But he incalculably damaged the army’s reputation, not just in Kashmir, but anywhere that video is seen.

The army must introspect what constitutes greater damage: A blow to its institutional credibility and the dilution of its operational culture, or the admittedly tragic consequences of dispersing the mob with fire.

After all, where does the 'but he saved lives' argument lead to in a counter-insurgency environment? Would the army chief use the same logic if a military officer who has cornered a Kashmiri terrorist holds a gun to the head of his two-year-old daughter and orders the terrorist’s wife to bring her husband out to surrender? That might save lives too.

This mortifying scenario might not be so far-fetched, going by what the army chief said in an interview with PTI. General Rawat declared: "This [Kashmir] is a proxy war and proxy war is a dirty war. It is played in a dirty way. The rules of engagements are there when the adversary comes face-to-face and fights with you. It is a dirty war... That is where innovation comes in. You fight a dirty war with innovations."

Does the army’s counter-insurgency challenge in Kashmir require it to function less like an army and more like a police or intelligence organisation? Is that what was intended when the government chose General Rawat over two more senior officers from the mechanised forces to become chief?

In 'off the record' briefings, army spokespersons explained at that time that General Rawat had been made chief because of his longer experience in Kashmir. Does 'longer experience' translate into gaining tactical results through un-military ruses and devices, even if they incurred strategic, political and public perception costs that far outweighed the benefits obtained?

The army has successfully dealt with insurgencies in Nagaland, Mizoram, Assam and Manipur without sacrificing its fundamental character as a war-fighting army that abides by principles of honour and creed. It did this, too, in the first two decades of combating the Kashmir separatist insurgency, successfully creating a sanitised security environment in which New Delhi could have (but did not) initiated political processes to craft a settlement.

Since 2009, however, when the centre of gravity of the Kashmir agitation shifted from armed militancy to intifada-style unarmed public protests, the army has struggled to deal with a new and infinitely more challenging security environment. This was starkly clear from General Rawat’s interview with PTI, where he stated: "I wish these people, instead of throwing stones at us, were firing weapons at us. Then I would have been happy. Then I could do what I (want to do)."

This, however, is wishful thinking from a bygone era.

The army will increasingly have to do what it least wants to -- confronting unarmed, rock-throwing, violent public protests. Its key challenge will be to do so without diluting its foundational warrior ethos with self-serving, and eventually self-destructive rationales about the need to 'fight a dirty war with innovation'.

Complicating the army's task is the pressure it faces to compensate for political failure.

As Lieutenant General D S Hooda, one of the army’s most thoughtful commanders in recent times, noted in the context of the Major Gogoi incident: "There will be political influences, it is in the nature of democracies, and pressure from public opinion. But the military ethic must stand on its principles and values. As the environment in Kashmir grows more vicious, this will require all our focus." 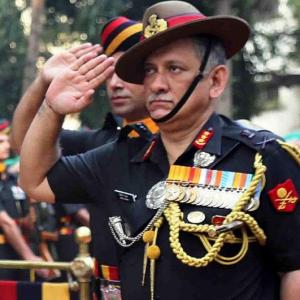 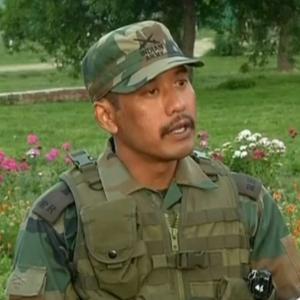