News
Business
Movies
Sports
Cricket
Get Ahead
Money Tips
Shopping
Sign in  |  Create a Rediffmail account
Rediff.com  » News » Is 2012 witnessing the birth of the Fourth Front?

Make no mistake, that nightmare is inching closer to reality.

There is a spectre haunting the CPI-M, the BJP, and the Congress -- the spectre of the Fourth Front.

Yes, you read that right, 'Fourth Front', not 'Third'.

The old 'Third' Front was cobbled together in May 1996 with no better purpose than to keep out both the Congress and the BJP, and the CPI-M was one of the founders.

The difference 16 years later is that the CPI-M may possess neither the numbers nor the acceptability, and India may, conceivably, be governed by a coalition whose claim to fame shall be that it keeps out all the three largest national parties.

Make no mistake, that nightmare is inching damnably closer to reality. Following on the heels of the various Vidhan Sabha results earlier this month, the by-election results confirm a growing suspicion that the three largest national parties -- the Congress, the BJP, the CPI-M -- are sliding downhill with smaller, mostly regional, players winning the medals.

The BJP lost Mansa, an assembly seat in Gujarat that it had won four times in a row since 1995, and the Lok Sabha seat of Udupi-Chikmagalur, a seat vacated when the sitting MP became the (current) chief minister of the BJP government in Karnataka.

The Congress somehow managed to lose all the seven assembly seats up for grabs in Andhra Pradesh. The CPI-M lost the Piravom seat in Kerala, the only by-election where it had a realistic chance, to the Kerala Congress, a constituent of the Congress-led United Democratic Front.

Each party possesses apologists galore, and they will undoubtedly speak of 'anti-incumbency'. This is simply not true.

Naveen Patnaik has been chief minister of Odisha since March 5, 2000. Twelve years later the Biju Janata Dal's Ranendra Pratap Swain swept Athgarh, winning 87,604 votes (more than double the combined tally of the Congress and the BJP).

V Muthuselvi of the ruling AIADMK was elected to the Tamil Nadu assembly from Sankarankoil with 94,977 votes. All four of her opponents lost their deposits, a bad omen not just for the DMK but also for its UPA partner, the Congress.

These results should also be seen in the context of Punjab, where the Akali Dal-BJP combine bucked a 40-year-old trend by winning a second term. 'Anti-incumbency' is a lazy excuse, something trotted out by spokesmen who do not wish to delve too deeply. Or is it that they fear to do so?

So, what ails the three national parties?

Is it lack of charismatic leadership?

Is there a lack of clarity about what policies and principles they represent, that confusion rubbing off on the voters?

Has the local leadership of each party just withered away at the grassroot level?

Or is it a combination of more than one factor, possibly even all three?

As far as the CPI-M is concerned the only states that matter are West Bengal, Kerala, and tiny Tripura. True, it has won seats from other states -- P R Natarajan won the 2009 polls from Coimbatore in Tamil Nadu, for instance -- but in those cases the Marxists are always the (very) junior partners.

The CPI-M needs to do some soul-searching on how a previous deficit of 157 votes in Piravom leapt up to become one of 12,070 votes.

How about the BJP? In the 2009 general election the party could win just 116 Lok Sabha seats. Fifteen of those seats were from Gujarat and nineteen from Karnataka. That works out to roughly 30 per cent of the BJP's victories coming from just two states.

The conventional wisdom is that Narendra Modi is still the man to beat in Gujarat, and that he can still turn things around come the assembly election later this year. But Karnataka seems to be something of a lost cause.

In a worst case scenario, where can the BJP make up the seats that it seems sure to lose in Karnataka?

The BJP's performance in the Uttar Pradesh Vidhan Sabha elections was awful, and it was saved from public blushes thanks only to an even worse performance by the Rahul Gandhi-led Congress. Assuming it continues with this dismal showing in the next general election, where can the BJP make up the seats it loses in Karnataka?

The brutal truth is that the BJP could well slip below the three-figure mark in the Lok Sabha if it does not repair its house in Karnataka, and lay the foundations in other states.

Having mentioned Telangana, let us turn to the Congress. In 2009 the single largest contingent of Congress MPs came from Andhra Pradesh, 33 in all. The Congress has been considerably weakened since then thanks to the Telangana agitation and Jagan Mohan Reddy's rebellion.

Six of the seven by-elections in Andhra Pradesh were in the Telangana region. The Telangana Rashtra Samithi won four of these, and a fifth was won by an Independent candidate backed by the party.

The sixth seat in Telangana, Mahbubnagar, was won by the BJP's Y Srinivasa Reddy, the party's sole victory in these by-elections; the BJP backs the call for a separate state.

The Congress has dithered over the Telangana issue, and has duly paid the price. But it is no better placed in coastal Andhra, where the sole by-election, in Kovur, was won by Jagan Mohan Reddy's YSR Congress.

The Congress's only consolation in Andhra Pradesh is that its old rival, the Telugu Desam Party, fared even worse, with its candidates losing their deposits in three seats.

The salt in the wound is that the Independent candidate who won in Nagarkurnool, Janardhana Reddy, was once a Telugu Desam MLA, who quit because N Chandrababu Naidu wouldn't declare his mind on Telangana.

But, as with the BJP, you have to wonder how the Congress can make up the loss of support in Andhra Pradesh, given its wretched performance in both the Uttar Pradesh and the Bihar Vidhan Sabha elections. Not to mention the poor performance in the Maharashtra local body elections and its troubles with the Trinamool Congress in West Bengal.

These, in case nobody realised it, are the five biggest states, Uttar Pradesh (80 seats), Maharashtra (48 seats), Andhra Pradesh and West Bengal (42 seats each), and Bihar (40 seats).

The sixth largest is Tamil Nadu, and the Congress and its allies are doing woefully there too.

Let me sum it up. The CPI-M is losing ground in West Bengal and Kerala. The BJP is on very slippery ground in Karnataka, and shows no sign of recovery in Uttar Pradesh. The Congress is being wiped out in the five largest states in India. (Any seats that the Congress wins at the BJP's expense in Karnataka cannot equal the losses in Andhra Pradesh and Tamil Nadu.)

With the Big Three faltering, the only option could be a rickety coalition of smaller regional players.

You can read more of Mr Shenoy's columns here 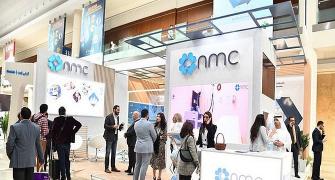 Is the BJP becoming a caricature of the Congress?